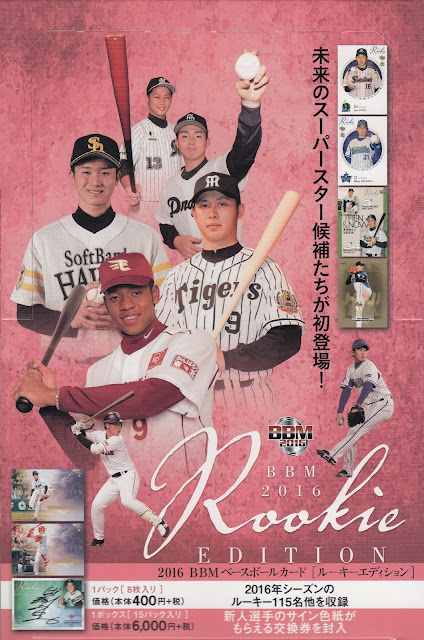 My copy of this year's Rookie Edition set arrived in the mail the other day and as no surprise, it looks quite a bit like the last few years versions of the set.  Rookie Edition is BBM's annual draft pick set featuring the players taken in the previous fall's draft.

This year's edition has 129 cards including 115 player cards for the draft picks.  As far as I can tell, the only player taken in the draft not included in the set is Yusuke Matsuzawa who was taken in the third round of the ikusei portion of the draft by Yomiuri (he's not on the Giants roster so I assume he didn't sign with them).  There are also two cards that sort of serve as checklist cards for the draft picks - there is a tiny head shot of each player along with his name, draft position and card number.  The other 12 cards in the set are the "Then & Now" subset that pair the top pick for each team with some other player from the team either past or present.

This is the eighth Rookie Edition set that I've written about and I pretty much ran out of things to say about it maybe five sets ago.  As always, the pictures of the players are posed shots that were probably taken at the press conference their teams held to introduce their draft class.  As always, I think it would be much more interesting to show photos of the players in their high school, college, industrial league or independent league uniforms although I understand how that might be a licensing nightmare.  What might be the most interesting thing about the set is that with BBM lowering the number of cards in their team sets so that only players on the official 70-man roster appear in them, this might be the only set that most of the ikusei players ever appear in.

Here are some sample cards:

I don't mean to sound like I'm down on the set - it's not a bad set.  It just kind of is what it is.  If you want a set that features the first card of every player taken in the NPB draft then you want to get this set.

UPDATE - forgot to mention that you can see all the cards at Jambalaya (as usual).
Posted by NPB Card Guy at 9:36 PM

This is basically the BBM equivalent of Bowman Draft. Therefore I kind of like it. Despite how lackluster the pictures used can get.

That said, I'm really looking forward to what Shinnosuke Ogasawara (Chunichi guy here lol) can do. His control is said to be quite good and he took the #1 Dragons prospect title away from Ryosuke Nomura. Hopefully I can add Ogasawara's autograph sometime soon as well.

I like the Rookie Edition sets - but I could like them a lot more if BBM did something a little more interesting with them.

I'm a Dragons fan too so I'm hoping for good things from Ogasawara also.