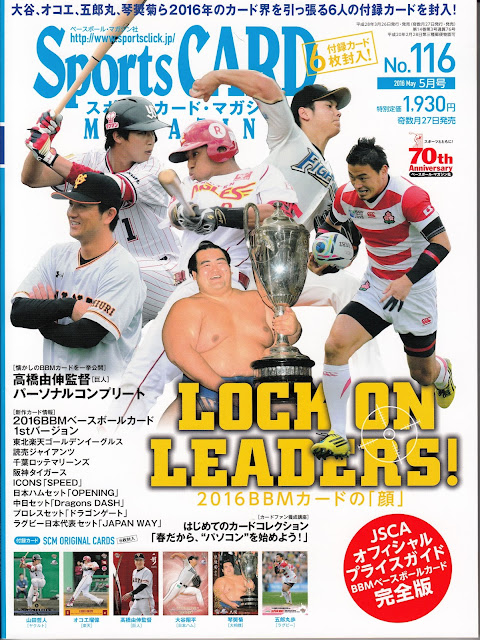 Instead of writing the paragraphs I used to write on these, I'm going to try a bullet point outline.

- The Kotoshigiku sumo card is kind of an oddball.  He was originally card #06 in the sumo set which I think is numbered according to the rankings of the wrestlers.  From his wikipedia page, it looks he moved up in the rankings in January so the SCM card is #03 in the sumo set.  Does that make sense?

- I got a purple facsimile autograph parallel of the Goromaru card

- Most of the items in the "newsprint" section are difficult for the non-Japanese reader like myself to figure out but one item did stand out - BBM and Nippon Ham are teaming up to produce a set of cards for the Fighters that will be distributed with Nippon Ham's "Home Run Sausage" products starting April 20th.  I think there are 68 possible cards in the set.  Details are here.
Posted by NPB Card Guy at 10:25 PM

What do you know about the JSCA? The magazine just has a phone number and address. No website and I couldn't find anything online. Curious on how they became the authority in Japan on prices.

The regular cards are numbered according to their ranking in the November 2015 tournament. Kotoshoguku was the #6 ranked wrestler that tournament so got the #6 card. I'm unsure as why he is #3 on his SCM card. I got done looking though this issue. Pretty interesting....going to keep my cards sealed for now in the magazine.

When it comes to the facsimile autograph parallels, i.e. foil signature cards, do you have any idea about how many are released in a print run? Thanks for any light you might be able to shine on this.

Sorry, but I really can't tell you much about them. The only thing I can tell from the magazine itself is that the "less rare" parallels is supposedly worth twice as much as the regular cards while the "more rare" parallels is worth five to eight times as much. I'm sure that implies something about the odds of pulling one from the print run but my statistical skills are pretty rusty these days.