Signing Up For Pacific League TV

I am frequently asked how I watch Japanese baseball games here in the States.  I used to use Justin.tv until Google shut it down a few years back.  I then switched to win24tv.com, a Korean site, but I've never been very comfortable with it.  I've always said that I would be willing to pay for something like MLB.TV for NPB but there isn't one.  There is Pacific League TV but I was never sure about whether or not I could sign up for it without a Japanese address, bank account or credit card and whether or not I could view it from outside of Japan.  And rather stupidly on my part, I never attempted to find out for myself.

The easiest way to sign up is to use a browser that automatically translates Japanese to English (I use Chrome) and go to the PLTV website.  There's a red button at the top of the page with text that says "利用登録" which translates to "On registration" (at least on Chrome anyway).  NOTE - all the screen shots I'm going to show don't have the automatic translation - just to show how easy it is even without the translation.

Once you click on that, you'll be taken to a page that allows you to select what kind of membership you want.  Your options are the "unlimited viewing package" (at either 950 or 1450 yen per month plus tax*), interleague only (flat rate of 1450 plus tax but it's only available from May 31 to June 19) or a single day's games (600 yen).  I signed up for the "unlimited viewing package" and was taken to the registration page. 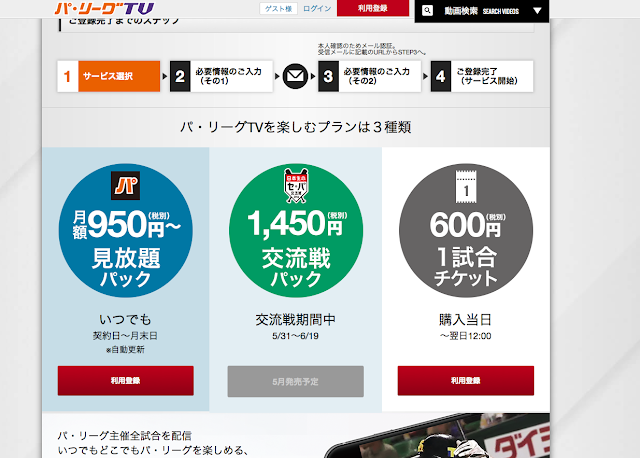 I will point out that PLTV is currently doing a promotion where you can watch for free from now until the end of March so this page currently looks different than the screen shot I'm showing here.

Some of the elements on the registration page have English on them, even if you don't have them automatically translated.  The page is long enough that I had to split it up into three screen shots.  I'll go over each of them in order. 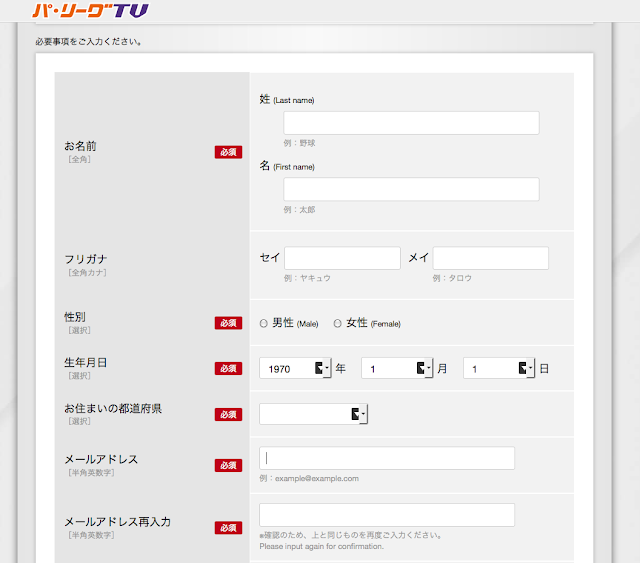 The red boxes labeled "必須" indicate required fields.  The first two fields ("お名前" or "Your name") are your last and first names.  The next two fields ("フリガナ" or "Yomi") (which are not required) are apparently used if the kanji version of your name has an alternate reading in hiragana.  Since I suspect that most people reading this don't use kanji for their names, just leave these blank.  The next field ("性別") is for your gender (obviously) and followed by your birthdate (生年月日) - the fields are for year, month and day.  The next field ("お住まいの都道府県") is where you have to lie a little bit - it's for which Japanese prefecture you live in.  I didn't see an "outside of Japan" option so I said "Tokyo".  The next two fields ("メールアドレス" and "メールアドレス再入力") are for your email address - the second one is to confirm that you typed it into the first one correctly. 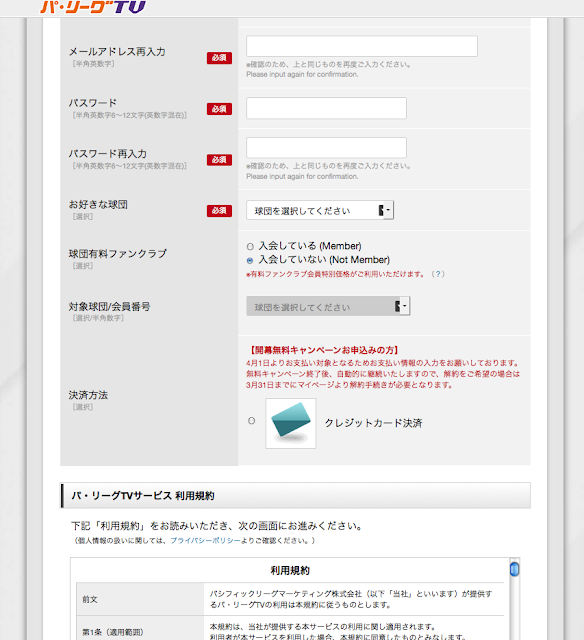 The next two fields ("パスワード" and "パスワード再入力") are for your password - again the second field is to confirm what you typed in the first one.  The next field ("お好きな球団") asks for your favorite team - all 12 NPB teams are listed, not just the Pacific League ones.  The next two fields (which are not required) are how you would specify if you belonged to PL team's fan club.  The first field ("球団有料ファンクラブ") is where you select whether or not you're a member.  If you select "Member", the second field ("対象球団/会員番号") will ask for which team and what your membership number is.   The last field ("決済方法") is where you select your payment type - currently you can only pick credit card ("クレジットカード決済") but when I signed up a few weeks ago you could also pick some sort of e-payment plan offered by Yahoo! or Rakuten.

Once you're filled in all the required fields, click on the red button towards the bottom of the page labeled "利用規約に同意の上、ご入力情報の確認へ進む (Confirm)". 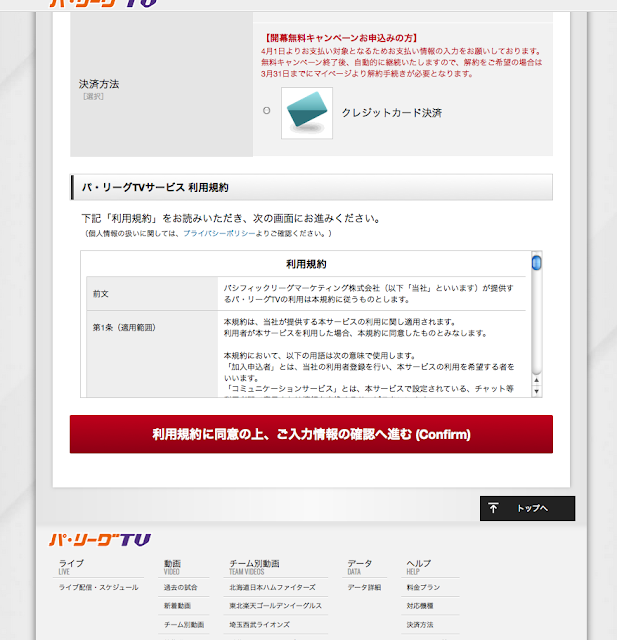 At this point, PLTV will send a confirmation email to the email address you entered above (assuming that they validated everything you entered in the form).  That email will contain a link that you'll follow to confirm that you gave them a valid email.  At this point you'll be asked to enter your credit card information. 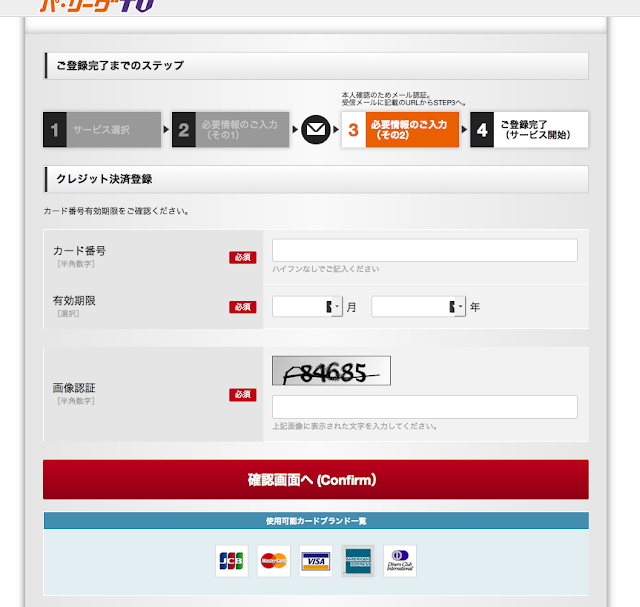 The first field is for the number on your credit card.  The next two fields are for the expiration date - month first, then year.  The last field is a captcha code to confirm you aren't a robot.  Once done, hit the big red button and PLTV will charge your credit card.  With the 116 yen tax, the total was 1566 yen which worked out to around $14.

I hope this makes sense and is helpful.  It was very simple to do and I'm regretting not having done it previously.

This is incredibly helpful, thank you. I was also using Win 24 TV......would much rather pay for legitimate streaming.

Thanks for the webpage. Just signed up today from Canada and even with my less than speedy DSL service, the game quality is excellent.

Will give it a try for the free period and see how it works out..but pretty sure I will be signing up for the long term.

Just signed up from Australia and works perfectly. Thanks for the article I would never have figured it out otherwise.

As far as I know. I've been watching this season without any issues.

Jim Allen had a sign up guide on his blog more recently.

I'm having trouble once I get to the "Confirm" button. It's as if it does not activate the process and the page does not proceed on to Step 3.

*Thank you for this blog. My brother plays there and has created his own account (which it will let me log into), but we're trying to set multiple family members up and of course we don't want to sign 15 people into his login.

I'm not sure how much I can help as it's been six years now since I wrote this. I guess the first stupid question is - you hit confirm and PLTV sent an email to your account containing a link, right? IIRC you need to follow that link to get to the page where you enter your credit card information. The page that you hit the "confirm" button in doesn't do anything after you hit the button.

And I of course have to ask - who's your brother? (If you don't mind telling me). The obvious choice from your handle would be Jacob Waguespack of Orix.

That's him. Hoping for a good year!

I haven't gotten an email with a link yet. I've checked spam and such, but no luck yet. I try on my phone, it'll go to a loading page after I hit "confirm", but it just stays there as if it's frozen. When I try on the computer, nothing happens. I'll keep trying different ways.

The only thing I can suggest is to check to see if you entered your email correctly which I'm sure you've already done a dozen times or so. Sorry I'm not more help.