Card Of The Week March 27

Opening Day for NPB was last Friday and the most exciting game was out in Tokorozawa between the Buffaloes and the Lions.  Orix had a 3-0 lead going into the seventh inning behind the string pitching of Chihiro Kaneko when the Lions rallied.  With one out, Tatsuyuki Uemoto singled and Tomoya Mori walked.  Shogo Akiyama doubled, scoring Uemoto and Takumi Kuriyama hit a sacrifice fly to bring Mori in.  Up stepped Ernesto Mejia, who then singled to tie the game at 3:

Orix took a 4-3 lead in the top of the ninth, leading to some more Lions dramatics in the bottom of the ninth.  After Yuji Onizaki struck out to lead off the inning, Akiyama walked (for the third time in the game).  Kuriyama then tied the score with a triple, bringing Mejia to the plate:


Mejia singled, bringing in Shotaro Tashiro (who was pinch running for Kuriyama) with the winning run and it was "Daydream Believer" time out at Seibu Dome.* 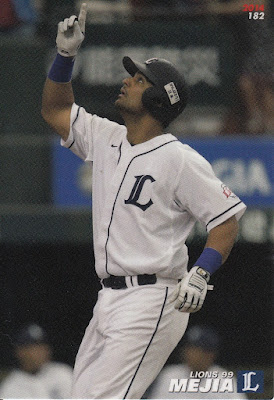 *The Lions play "Daydream Believer" after every win at Seibu Dome.  I'm not sure who the artist on the recording is but it's not the Monkees.  You can hear it in this video.
Posted by NPB Card Guy at 9:24 PM