I used to make April Fools' jokes here on the blog.  Most of them weren't particularly clever and I ran out of ideas after a couple years.  But I still think try to think of ones and this year I considered trying to make some joke about BBM doing a version of Topps Now.  I just really couldn't come up with anything funny to say about the idea - other than maybe BBM publishing them within 30 minutes of the game ending and each card having some ridiculous number of parallels.  As I said, I really couldn't come up with anything good - which is why I didn't do a post for it.

It probably good that I didn't try to joke about it because it turns out that Epoch is actually doing it!  I got a tweet from Kenny (aka Zippy Zappy) the other night telling me that Epoch had launched something called Epoch One which was their version of Topps Now.  There's a couple nice differences though - the cards are only 500 yen (about $5) and they are available for about three days.  There are discounts for ordering several cards at one - 3 cards are 1350 yen, 5 cards are 2000 yen and 10 cards are 3500 yen.  There doesn't appear to be a shipping charge.

On the negative side however - they don't ship to the US.  Kenny already sent them an email and asked.  So the only way to get them outside of Japan would be to use a proxy company (although none of them are set up to buy from them automatically so you'd need to contact them to ask if they'd do it) or have a friend in Japan who can order them for you.  They also apparently only have licenses with seven teams to do cards - the Lions, the Dragons, the Tigers, the Marines, the Giants, the Carp and the Fighters.

As of right now there's 35 cards so far through the games of April 4.  I swiped the image of the front and back of the first card from their site: 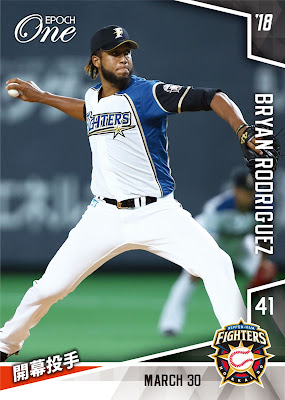 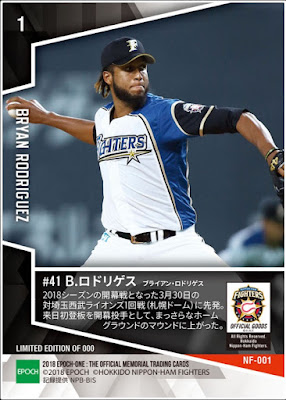 Each card has a couple numbers on the back.  The number at the upper left is the overall card number.  There's a number at the lower right that is the team-specific number.  This particular card is "NF-001".  The card will also have the number of cards in the print run on the lower left side.

I think this is a cool idea and I wish there was an easy way for me to get some of them.  I don't want to get all of them - I mean even at 350 yen a card we're already looking at over 10,000 yen for what they've put out just in the first week of the season.
Posted by NPB Card Guy at 9:46 PM

Based on what I've heard there are rumors going around that most of the people buying these are retailers. So our good friend Ryan may end up finding some at his trips to various Mint stores.

Oh dang. Nice to see they have jumped on board with the NOW concept. It can get spendy for sure though.

A different image on the back would be nice.