Study Abroad - The Dragons And The Dodgers

The Chunichi Dragons made some big changes during the offseason between the 1986 and 1987 seasons.  The Dragons had won the Central League pennant in 1982 but had finished fifth three times in the following four seasons.  Kazuhiro Yamauchi, their manager at the beginning of 1986, was forced to resign during the season due to health issues and Morimichi Takagi ran the team the second half of the season (the first of three separate times he was Dragons manager).  For 1987 the team decided to go in a different direction and instead of letting Takagi continue with the team, they brought in former Dragons pitcher Senichi Hoshino as manager.  Their other big personnel move of the offseason was the trade with Lotte that brought 1986 Triple Crown winner Hiromitsu Ochiai to the team (at the cost of four players).

But their other move of the offseason was to form a partnership with the Los Angeles Dodgers.  This was a bit of a coup as the Dodgers had for years been associated with the Yomiuri Giants with the Giants having done spring training with the team in Vero Beach, Florida five times between 1961 and 1981.  I'm not sure what all the parameters of the partnership with the Dodgers was or how long it lasted but it manifested itself in three obvious ways.  The first is that the Dragons uniforms closely resembled those of the Dodgers for the next 17 years (really until Ochiai became manager in 2004).  The second is that the Dragons did spring training with the Dodgers in Vero Beach in the spring of 1988.  The third is that 10 players from the Dragons played in the Dodgers organization between 1987 and 1989.

The first two players Chunichi sent to America were teenagers Tetsuo Arakawa and Takeshi Yamasaki who were assigned to the Dodgers team in the Gulf Coast League.  Neither one played a whole lot - Yamasaki got into 10 games (5 in the field at first base) and went 0-10 with 3 walks and 4 strikouts.  Arakawa got into only four games (three in the field at shortstop) and went 0-3, striking out in all three at bats.

The Dragons sent five players to the Dodgers organization in 1988.  Again two players were sent to the Dodgers' entry in the Gulf Coast League - outfielders Kazuyoshi Kohyama and Yasuharu Fujio - but this time they got more of an opportunity to play and made the most of it.  Kohyama (whose NPB stats are listed separately at Baseball-Reference under Kazuyoshi Koyama) hit .311 in 61 games.  Fujio only got into 16 games in the GCL but his .375 average with one home run earned him a mid-season promotion to the Dodgers' Short Season Low A Northwest League team in Salem, Oregon where he hit .200 in 19 games.  Fujio joined third baseman Hiroyuki Maehara (who's name is mispelled "Maebara" in Baseball-Reference) in Salem, who hit .196 in 54 games.  Maehara also pitched in one game, giving up two hits in two innings while striking out two.  The best performances by Dragons players in the US that year however were in Vero Beach of the Florida State League where two pitchers - Masahiro Yamamoto and Hidetsugu Nishimura - put up impressive numbers as members of the team's rotation most of the season.  Yamamoto went 13-7 with a 2.00 ERA and 105 strikeouts in 148 2/3 innings.  He had six complete games and three shutouts.  He was named to East team for the mid-season Florida State League All Star game as well as the post-season league-wide All Star team.  Nishimura went 11-3 with a 3.34 ERA and 124 strikeouts in 148 1/3 innings.  He had three complete games and two shutouts.

Chunichi dispatched three pitchers to North America for 1989.  One of them, Koji Takaheshi, started the season with the GCL Dodgers (going 1-0 with a save in three appearances with 11 strikeouts in 12 1/3 innings and a perfect 0.00 ERA) before he was promoted to Vero Beach where he didn't perform quite as well (0-4 with an ERA of 5.18).  He joined fellow Chunichi players Masaaki Kamanaka and Yasuhiro Kawabata in Florida.  Kamanaka went 3-3 with 3 saves in 33 games mostly in relief.  He had an ERA of 3.91 and 52 strikeouts in 92 1/3 innings.  Kawabata went 5-3 with a 3.00 ERA in 11 games as a starter.  He threw one complete game (a shutout) and struck out 47 in 69 innings.

Here's a summary of the 10 players and their NPB careers:

Masahiro Yamamoto and Takeshi Yamasaki were the most successful of the players the Dragons sent to the Dodgers organization.  Yamamoto played with the ichi-gun Dragons in parts of 29 seasons between 1986 and 2015.  I did a summary of his career when he retired a few years ago so won't go into a whole lot of detail.  He did return to Chunichi from Vero Beach in 1988 and went into the Dragons rotation for September where he went 5-0 helping the Dragons win the Central League pennant.  He also started (and lost) Game Three of the Nippon Series that year.  There are many Japanese baseball cards of Yamamoto available.

Yamasaki spent parts of 25 years with the top level teams in NPB.  He was with the Dragons until they traded him to Orix after the 2002 season.  After two years in Kobe he moved north to Sendai and spent the next seven seasons with the Eagles.  He came back to the Dragons for the final two years of his career in 2012-13.  Like Yamamoto I wrote a summary of his career when he retired and like Yamamoto there are quite a few Japanese baseball cards of Yamasaki out there.

Hiroyuki Maehara had the longest career of the remaining players.  He made the All Star team in 1992 and was traded to the Lions in 1996 along with Masaji Shimizu for Katsuyoshi Murata and Kazuaki Yamano (who had played in the US with San Jose in 1986-87).  He was player/coach for two years with an industrial league team (Showa Concrete) after the Lions released him and later coached for the Mie Three Arrows indy league team and the Dragons.  He had a handful of Japanese baseball cards (although oddly enough he did not make the 1992 BBM All Stars set).

Kazuyoshi Koyama played in the Dragons organization until 1997 but he spent most of his time with the farm team.  The only year he had more than 100 at bats with the ichi-gun team was 1990.  He has only two Japanese cards I'm aware of - both from 1991.

Yasuhiro Kawabata had spent parts of three seasons with the top team before going to Vero Beach in 1989.  He returned to the Dragons that season in time to get in 20 games with them, going 7-1.  He was traded to Orix for Toyozo Minamimure early in the 1991 season.  He spent a couple of years in their bullpen but only played for the farm team in his last couple seasons - including a final season when he returned to the Dragons.  He apparently is currently an official scorer for the Buffaloes.  There are a handful of Japanese baseball cards of him.

Yasuharu Fujio was the first pick of the Dragons in the fall 1983 draft out of Kyoei High School in Nagoya.  It was hoped that he would become a power hitting third baseman for his hometown team but he never really developed into this role.  Following the 1989 season Chunichi traded him and Yoshihisa Komatsuzaki to the Nippon Ham Fighters for "the other' Yukio Tanaka (the pitcher obviously) and Kazuo Hayakawa.  He spent three years with the Fighters but his numbers never really improved and he retired following the 1992 season.  He has a number of Japanese baseball cards but I don't have any of them.

There are no Japanese baseball cards of the remaining four players that I am aware of.

Despite putting up good numbers in Vero Beach in 1988, Hidetsugu Nishimura didn't have a lot of success in NPB.  He had gone 0-1 with an ERA of 9.00 in four games with the Dragons in 1987.  In mid-1989 the Dragons capitalized on his success in Florida by packaging him with Koichi Emoto in a trade to the Fukuoka Daiei Hawks for Takayuki Shirai and Hiromichi Nakamura (Emoto would be sent by Daiei to Salinas in the California League in 1990).  He went 0-1 in 16 games with the ichi-gun Hawks over the next three and a half years and retired following the 1992 season.

Masaaki Kamanaka's Dragons career lasted until 1995 but he spent almost the entire time with the farm team - he made two appearances with the top team in 1992 where he gave up 3 hits (including two home runs) and three runs in two innings.  He spent 1996 with the Kintetsu Buffaloes' farm team before retiring.  Koji Takaheshi only played in six games with the ichi-gun Dragons (in 1990) while Tetsuo Arakawa never made it off the farm team.

In the late 1980's it was still kind of hit or miss whether or not a minor league team would have a team set of baseball cards and of the five teams that the Dragons players were part of, only Vero Beach had cards (although even today I wouldn't expect a Gulf Coast League team to have a card set).  Both of the Vero Beach team sets were produced by Star.  Four of the five Japanese players who played in Florida ended up having cards - Yamamoto and Nishimura from 1988 and Kamanaka and Kawabata in 1989.  Here are images of the front and back of all four cards, swiped either from TradingCardDB.com or Ebay: 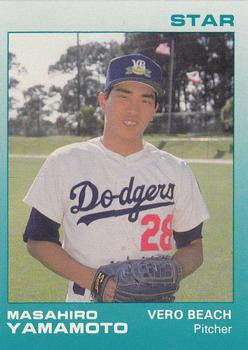 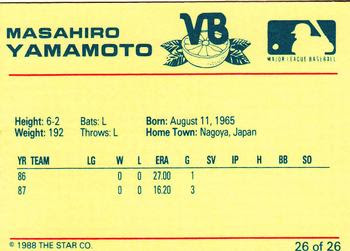 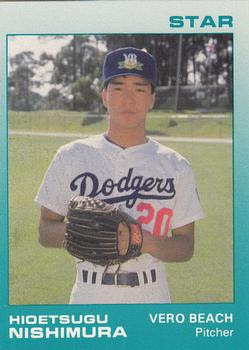 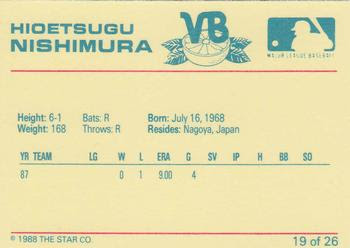 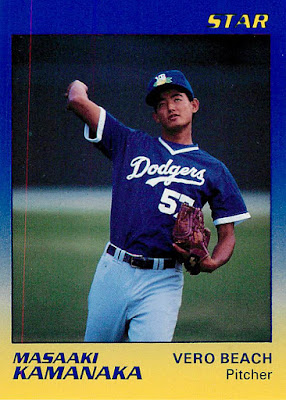 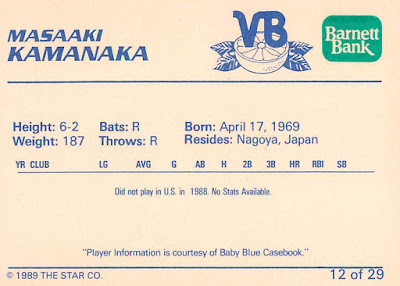 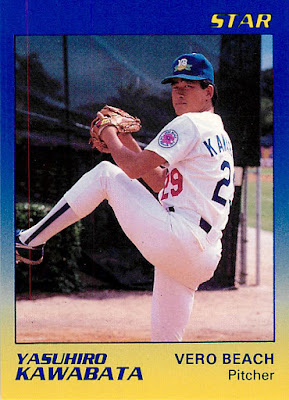 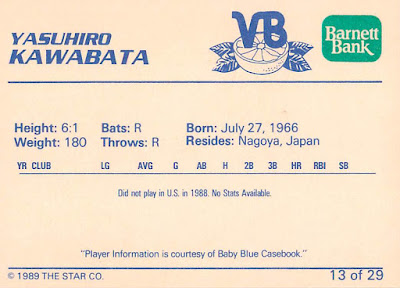 In addition, Yamamoto also appeared in the 1988 Florida State League All Star set (also from Star).  I swiped these images from TradingCardDB.com as well: 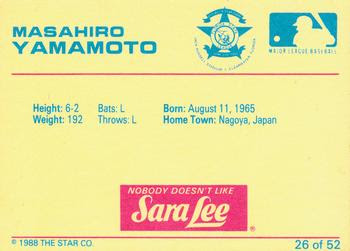 Kamanaka and Nishimura both have American minor league baseball cards but do not have Japanese cards.  These are the earliest cards for both Yamamoto and Kawabata.

In addition Chunichi apparently sent a coach to at least Vero Beach in at least the 1989 season.  The 1989 team set included a card of Jun Irisawa who I have not been able to identify at all. 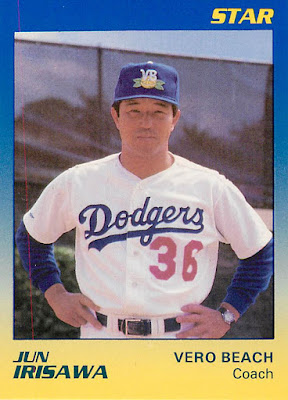 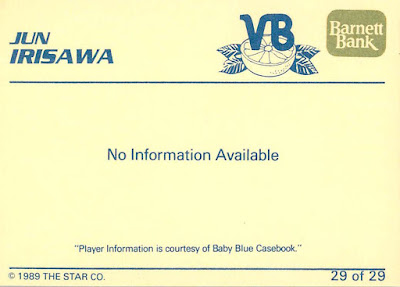