I wanted to do a quick round up of some newly announced and newly released sets.

- BBM doesn't have anything about it on their website yet but they will be releasing their annual pack-based Lions team set on May 29.  As has been standard for the past couple years the base set will have 81 cards which include 68 "regular" player cards, 6 "Catch The Moment" cards, 3 "Accelerator" cards and 4 "Reign Men" cards.  There are 30 insert cards split between "Sparkling" (3 cards), "Rocket Arms" (3 cards), "Big Bangs" (3 cards), "Pride Of Lions" (9 cards) and the ubiquitous "Phantom" (12 cards).  There will also be randomly inserted autograph cards.

- Hits has announced a new "Mini Color Paper" set.  Instead of a team this time the set is to commemorate Yasuaki Yamasaki's 100th career save.  There are 16 possible "cards" - 8 normal ones and 8 "gilded print signed special" ones.  The set will be released May 25th.

- @lovelovemarines gave me a heads up the other day that Lotteria, a convenience store chain in Japan that I think is owned by Lotte, has some promotion going on that involves a 10 card set of Chiba Lotte Marines baseball cards.  I did a little searching on the internet and found a news release about it but unfortunately it's a scanned in version of the press release so I can't have Google translate it.  I think the cards are given away with a meal from the store that comes in a box that features the Marines "mysterious fish" mascot.  The 10 cards include cards for 8 players (Takashi Ogino, Katsuya Kakunaka, Daichi Suzuki, Shogo Nakamura, Shohei Kato, Chihaya Sasaki, Tatsuhiro Tamura and Kota Futaki), manager Tadahito Iguchi and the Marines' 2018 rookie class.  I believe that the meals with the cards are available from Opening Day (March 30) until the end of the season (October 2).  I'm not sure if there are available at all Lotterias, only Lotterias in Chiba or only at the Marines' ballpark.  This is the picture of an ad for the set that @lovelovemarines shared with me: 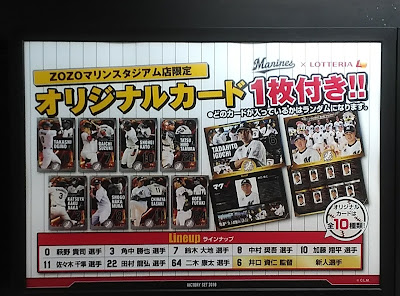 - For the third year in a row Nippon-Ham is releasing a Fighters' team set with their "Home Run Sausage" product.  The checklist for their first series is on-line - there's 74 cards that includes a card for manager Hideki Kuriyama, four cards for their mascots and 69 cards for the Fighters' players.

Regarding the Lotteria set, the image you posted and the linked press release indicate that it's only available at the stadium.

And if you really love that Mysterious Fish mascot, for 1300 yen, you can get the salmon cheeseburger set with a clear file instead of a card.

I do like the Mysterious Fish mascot, but I think I'd go for the card instead. Thanks for the details!