The balls were flying in the Tokyo Dome on Friday during the Baystars-Giants game.  Yoshitomo Tsutsugoh started it off with a two run shot in the top of the third but Yomiuri came back in the bottom of the inning with a three run dinger off the bat of Hayato Sakamoto.  DeNA tied the game up in the top of the fifth with a solo home run from Takayuki Kajitani.  The final home run of the game was hit by an unlikely hitter - Giants starting pitcher Tomoyuki Sugano, who led off the bottom of the fifth:


The Giants went on to win the game 6-3 - their other two runs scoring on a single by Shinnosuke Abe who was pinch hitting for Sugano in the next inning.  It was Sugano's first career home run.

BBM did a pitchers "Batting Scene" theme for the team checklists in the 2013 2nd Version set and Sugano was the player featured on the Giants team card (#662) although his is more a "Baserunning Scene": 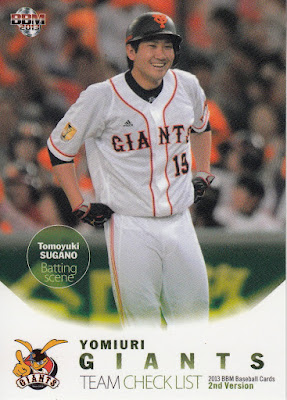