Here's the highlight videos from the past few days courtesy of Pacific League TV.  First up the home run and double from Thursday:

Next the two home runs from Saturday:

Dominguez was the guest on last week's Japan Baseball Weekly podcast.  There have been jokes made in the past by people (including me) about there being a "JBW podcast curse" as there have been occasions where someone has had a bad week or gotten injured after appearing on the podcast.  It looks like Dominguez reversed the curse.  Perhaps we should start talking about the "JBW podcast bump" from now on.

This is Dominguez's first season in Japan so his 2018 BBM 1st Version card (#153) is the only card I have of him so far (off hand the only other Japanese card of him is from this year's Marines team set from BBM): 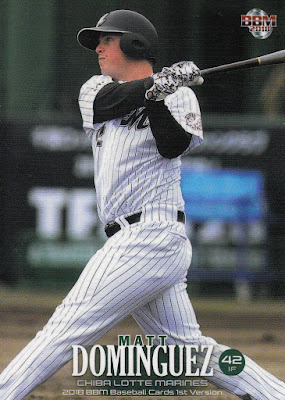