Card Of The Week September 9

One of the things I am constantly on the lookout for is cards that show "collisions" (for lack of a better word) between NPB and MLB, especially from when NPB teams have come the US to do spring training.  I recently picked up a card from the 1975 NST "Mr. Baseball" set (#189) that shows Yomiuri Giants manager Shigeo Nagashima with Gene Mauch who was manager of the Montreal Expos at the time. 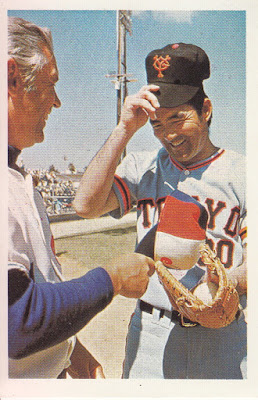 The Giants were doing spring training in Vero Beach, Florida that year and played at least one exhibition game against the Expos - there's a Calbee card from the 1974-75 set that shows Giants pitcher Kazumi Takahashi facing an unidentified right handed Expos batter.

Posting is going to be very light for me for the next few weeks - I'm on a two and half week vacation.
Posted by NPB Card Guy at 8:00 AM

There is actually another card from the 1974 Calbee set in addition to the one you mention which also features Expos players from that spring training. I'll have to dig it out, I have been meaning to do a post about it ever since I bought it!