Card Of The Week September 2

I was having a hard time picking a card of the week topic this week.  I thought about doing Yoshihiro Maru of the Carp who has been haunting the Tokyo Yakult Swallows lately.  He hit a go ahead home run in the top of the tenth on Friday night which was the deciding run in the Carp's 6-5 victory in a game that the Swallows led 5-1 after seven innings.  This came a week or so after he hit a game tying three run home run in the bottom of the ninth against Yakult in Hiroshima which set up Seiya Suzuki's sayanora home run immediately afterwards.  Again this led to a victory in a game in which the Swallows were up big late before losing - this time it was a 9-8 victory in a game in which the Swallows had led 7-0 after four innings and 8-5 going into the bottom of the ninth.

But I also thought about highlighting Hiroyuki Nakajima of the Buffaloes whose three run home run in the bottom of the ninth yesterday beat his former team the Lions 10-8 in a game in which the Lions had led 8-3 after six innings.  The advantage to picking Nakajima is that there's video readily available of the home run, the downside is that it would be the second straight week I did card of the week about a guy beating the Lions on a walk-off home run. 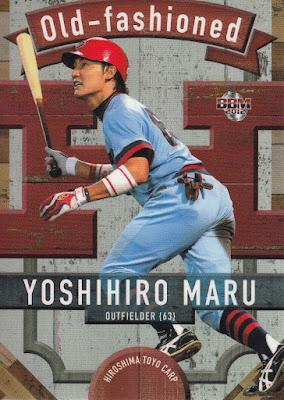 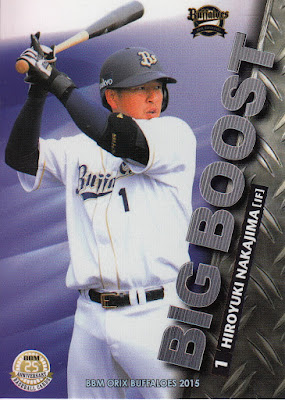