Card Of The Week August 26

The Fukuoka Softbank Hawks are on a roll.  They've won their last nine straight and have vaulted into second place in the Pacific League, just five games behind the first place Lions, who they swept this weekend.

Yuki Yanagita had four home runs against the Lions including two today but the big hit for the Hawks today came off the bat of Yurisbel Gracial.  Gracial had signed with the Hawks in February but for a variety of reasons he didn't really start playing regularly with the team until recently (after fellow Cuban Alfredo Despaigne was taken off the roster with a knee issue).  He hit his first home run for the Hawks last Tuesday (and was quoted as saying "That was my 1st home run. It won't be my last." which was prescient as he would hit two more the next day).  He came up today with the bases loaded in the bottom of the 12th and promptly unloaded them:


Like Despaigne, Gracial appears to be a Cuban baseball player who's allowed to play overseas without having defected.  He spent the last two seasons playing for Quebec in the independent Cam-Am League.  He's played baseball in Japan before as he was part of the Cuban team for the 2017 World Baseball Classic.

Gracial appears in BBM's Hawks team set this year but his first flagship card wasn't until their 2nd Version set came out a few weeks ago.  He's in the 1st Version Update subset (#339): 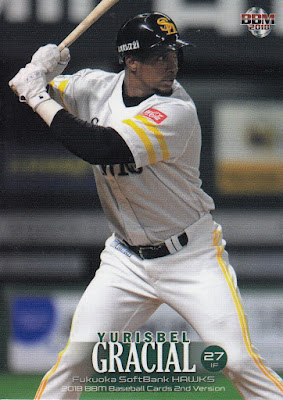