There are 39 cards in the "Foreign Attack" set - 37 players (well 36 players plus one manager), a "Leader" card and a checklist.  The player cards use what is essentially a copy of the 1984 Fleer design.  Here's the front and back of Nick Evans' card (#2): 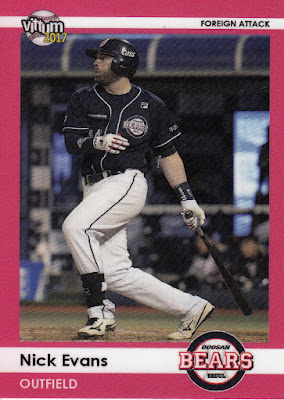 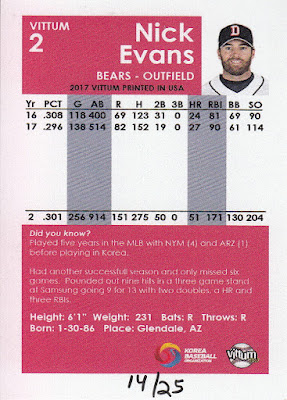 Dan had 25 sets made up - all the cards have the handwritten number on the back.

The cards look really good - here's a bunch of other examples:


I like the "Foreign Attack" set but I LOVE the "Home Run Kings" set.  This is an 11 card set that includes the ten afore-mentioned home run leaders plus a checklist card.  The fronts AND backs feature full bleed photos.  It may be difficult to see in my scans but the cards also feature rounded corners and I don't mean slightly rounded corners like Calbee does - there are BIG rounded corners.  It just helps make the cards very distinctive and attractive.  Here's the front and back of Dae-Ho Lee's card (#5): 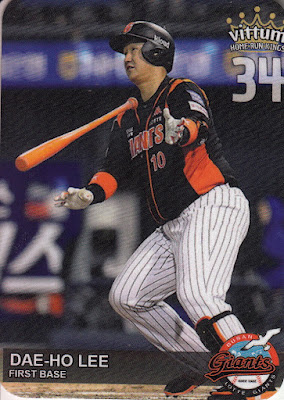 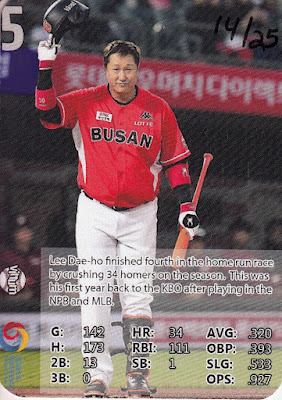 You can see that these also are numbered to 25 - which makes sense because there's no way to order one set and not the other.  Here's a couple more examples from the set:


Like his set from last year, Dan's created a couple very attractive sets.  If you're interested in one, contact Dan via his blog or Twitter.  I'm not sure how many he still has available.
Posted by NPB Card Guy at 9:04 PM