Card Of The Week August 19

Wednesday will be the 20th Anniversary of the championship game of the 1998 Summer Koshien Tournament.  Yokohama defeated Kyoto Seiji 3-0 behind the pitching of Daisuke Matsuzaka who threw a no-hittter, only the second one ever in a Koshien champsionship game.  Matsuzaka had pitched an outstanding tournament, throwing 250 pitches in Yokohama's 17 inning defeat of PL Gakuen in the quarterfinals and he came in to pitch one inning the next day in his team's unlikely comeback victory against Ming-Juku in the semifinals.  Yokohama was down 6-0 going into the bottom of the eighth but rallied to score four in the bottom of the eighth and three in the bottom of the ninth to make it to the final game.

I found the highlights of his no-hitter on YouTube.  Highlights of some of the other games he pitched in can be found in this search.

Matsuzaka became something of a sensation due to his performance.  He was selected by three teams (Nippon-Ham, Seibu and Yokohama) in the first round of the draft that November and signed with the Lions after they won the lottery for him.  He immediately went into the Lions' starting rotation and made his NPB debut on April 7th, 1999 and defeated the Fighters.  He started one of the All Star games that season and struck out Takuro Ishii and Takanori Suzuki.  He went 16-5 that season and won the Pacific League Rookie Of The Year award.

The rest of Matsuzaka's story is well known.  He remained with the Lions until he left for MLB after the 2006 season.  He joined the Red Sox in 2007 for a then record $51 million posting fee.  He spent seven seasons in MLB - five with the Red Sox and two with the Mets - before returning to Japan in 2015, signing with the Fukuoka Softbank Hawks.  Injuries limited him to only one appearance with the top team in the three years he spent in Kyushu and the Hawks released him after last season.  He joined the Dragons this season and has had a decent year - he's 5-3 with an ERA of 2.79 in nine starts.  He was elected as a starter for the Central League All Star team this year - mostly in tribute to his overall career rather than his performance this year - and he was rocked in his start - giving up five runs in one inning, including a solo home run from Shogo Akiyama and a three run shot from Tomoya Mori.

Matsuzaka's professional career has been interrupted frequently due to injuries and it's hard to not to make a connection between the number of pitches he threw during the 1998 Koshien Tournament to those injuries.  The phrase "Flags Fly Forever" that comes to mind though and I wonder if Matsuzaka himself thinks that the championship was worth the over-use he suffered in 1998.  Keep in mind that Matsuzaka was also part of two World Baseball Classic champion teams and is one of just eleven players to have won both a Nippon Series (2004 with Seibu) and a World Series (2007 with Boston).  While his career hasn't been what it could have been, it's still been pretty good. 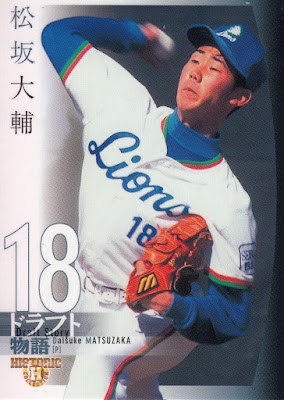