I got an email the other day from Dan.  Well actually it was a group email sent to myself, Jason and Ryan.  Dan had picked up a BBM card of Seung-Yeop Lee from 2004 and was having difficulty identifying the set.  To complicate matters, Dan not only wanted to know what set the card was from but he wanted a complete checklist for the set to add to The Trading Card Database so that he could get the card graded.  He sent along the following scan of the front and back of the card: 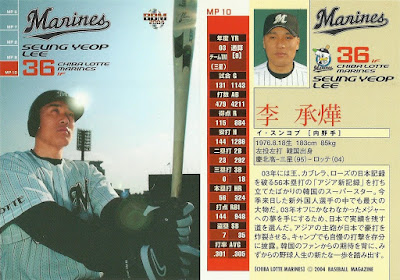 Jason, Ryan and I were all stumped.  My first thought was that it was an insert card from the 2004 BBM Marines set but it didn't match what was in Engel.  Not only was the numbering prefix wrong but Lee wasn't card #10 in any of the insert sets.  Ryan and I both postulated that it could be some sort of related promotional set, especially since the image on the card resembled the one on Lee's bat card from the set:


But typically BBM's promo sets are clearly marked as promo sets so this didn't seem all that likely.

Ryan came up with the breakthrough today.  He somehow discovered the set was called "千葉ロッテマリーンズチョコ付録カード" which translates roughly to "Chiba Lotte Marines Choco Appendix Card".  Doing a Google search on this gives you a link to an old website of a collector looking to trade for Marines cards.  He had one extra card from the set and was looking for two others.  As it turned out, I know the collector - he's a Marines fan named Takashi that I've done a couple trades with, most recently about a month ago.  I sent Takashi an email asking about the card and he provided a wealth of information about the set.

The set is actually a 10 card food-issued set printed up by BBM.  The cards were given away with packages of a chocolate candy called "Toppo" that was (and apparently still is) made by Lotte.  The cards were only given away in AM/PM convenience stores in the Kanto region.  Takashi pointed out that because it was a limited distribution the cards are difficult to find.  He provided the complete checklist for the set that Dan has already uploaded to Trading Card DB as well as another image of a card from the set (#MP9): 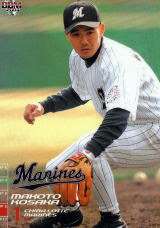 This set was not in either Engel or Sports Card Magazine so thanks to Dan, Ryan and Takashi, there's a previously unknown set that's now cataloged.
Posted by NPB Card Guy at 8:36 PM

Awesome. Great teamwork and thanks so much to Takashi. I still need to make a checklist for that bat set but I haven't seen any other relics aside from my Lee bat. Can you help with that?

I think so. I'll send you an email in the next day or so.