BBM has done some sort of cross set subset, usually with at least the 1st and 2nd Version sets, almost every year since 2010.  These subsets contain active players and they have some theme like "Cross Wind" or "Cross Blast".  BBM's actually gotten kind of monotonous with them but they usually look nice. 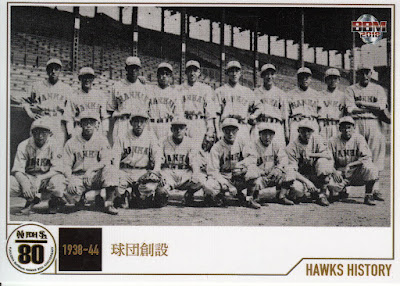 Card #HH1 - The team was founded in Osaka by the Nankai company in 1938.  The team was known simply as Nankai until midway through the 1944 season when they changed their name to Kinki Nippon. 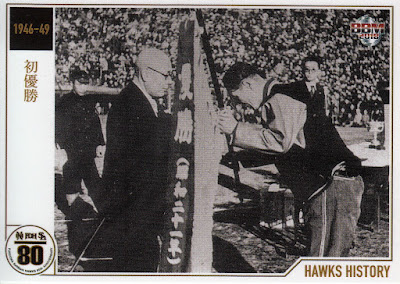 Card #HH2 -  The team won their first Japan Baseball League Championships in 1946 and 1948 under player-manager Kazuto Tsuruoka (who was known then as Kazuto Yamamoto).  I think that's him on the right. The team was called Kinki Great Ring from 1946 to midway through the 1947 season when they changed their name to Nankai. 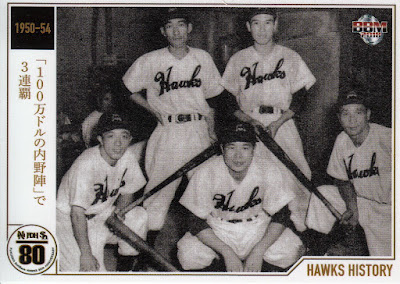 Card #HH3 - The Hawks won three consecutive Pacific League pennants from 1951-53, powered by what I think was called the "Million Dollar Infield" which featured Tokuji Iida at first, Tsuruoka at second, Chusuke Kizuka at shortstop and Kazuo Kageyama at third.  I assume that all four of them are in the photo but I don't know who the other player is.  The Hawks were defeated by the Yomiuri Giants in each of the three Nippon Series between 1951 and 1953. 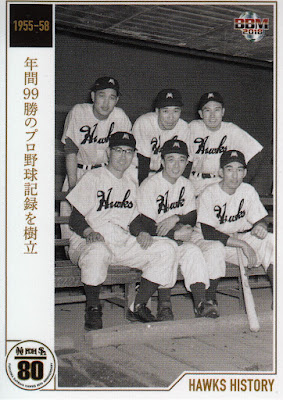 Card #HH4 - The Hawks won an NPB record 99 games in 1955 en route to their fourth Pacific League pennant in five years.  They again lost to the Giants in the Nippon Series though.  They won 96 games in 1956 but were edged out for the pennant by the Nishitetsu Lions who also won 96 games but lost one fewer game. 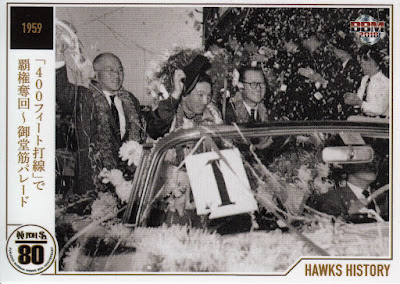 Card #HH5 - Behind their power hitting lineup that was dubbed the "400 foot batting line" the Hawks won their first Nippon Series championship in 1959 by defeating the Yomiuri Giants in four games. 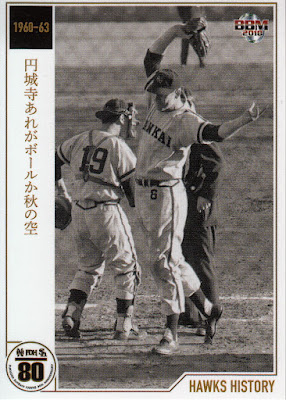 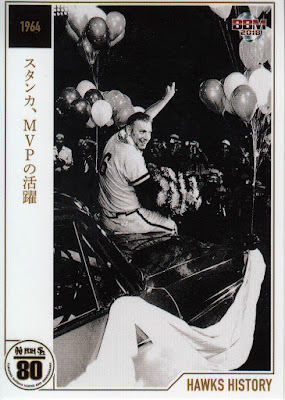 Card #HH7 - The Hawks won their second Nippon Series title in 1964 by defeating the Hanshin Tigers behind the pitching of Series (and Pacific League) MVP Stanka. 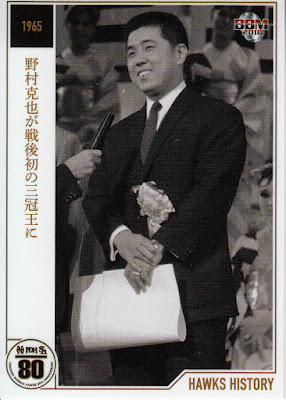 Card #HH8 - In 1965 Nomura won the first ever Triple Crown in NPB, leading the Pacific League with a .320 batting average, 42 home runs and 110 RBIs.  The Hawks won the Pacific League pennant that year but lost in the Nippon Series to the Giants (again). 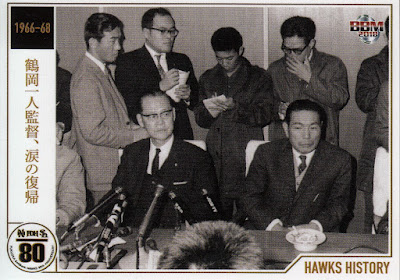 Card #HH9 - The Hawks won another Pacific League title in 1966 but again lost to the Giants in the Series.   This photo shows Tsuruoka resigning as manager following the 1968 season.  Tsuruoka had managed the team for all 23 post-war seasons. 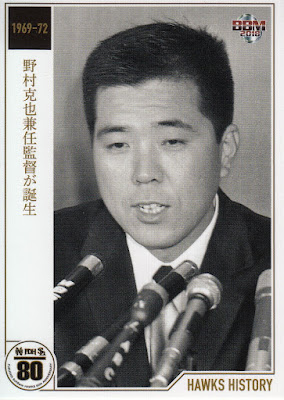 Card #HH10 - After Iida managed the team for the 1969 season, Nomura was named player-manager starting with the 1970 season. 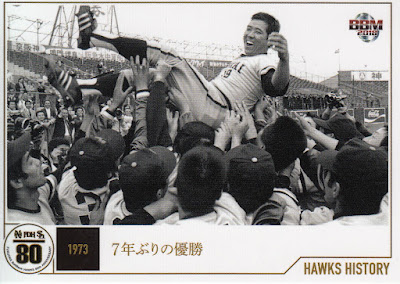 Card #HH11 - Nomura won his fifth Pacific League MVP in 1973 and led the team back to the Nippon Series for the first time since 1966.  They lost yet again to the Giants.  This was the final pennant that the team would win while owned by Nankai. 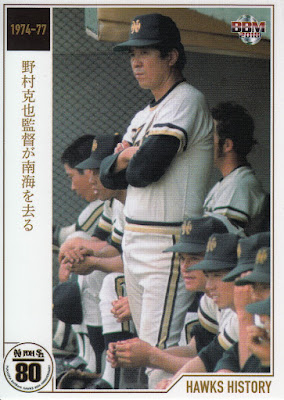 Card #HH12 - Nomura managed the team until for another four years but failed to win any more pennants.  He stepped down as manager following the 1977 season and was released as a player. 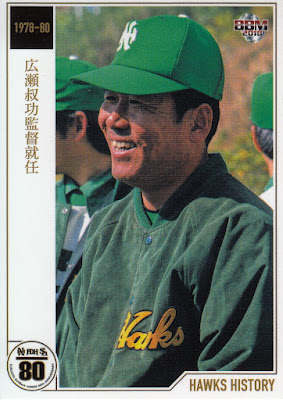 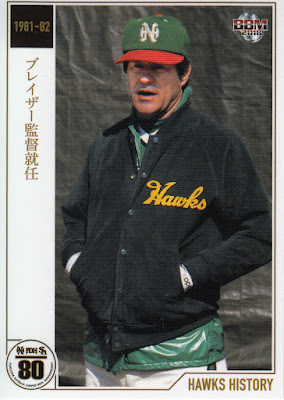 #HH14 - Don Blasingame became the first American to manage two teams in Japan when he took over the Hawks in 1981 after spending two seasons running the Hanshin Tigers.  Blazer wasn't any more successful than Hirose, however, with the Hawks finishing fifth in 1981 and sixth in 1982. 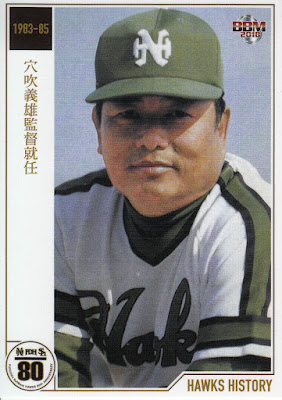 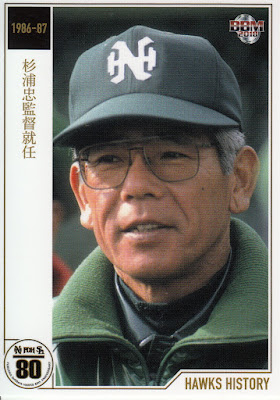 #HH16 - Former Hawks pitching great Tadashi Sugiura was named manager for the 1986 season.  While the team again finished last that season they rose to fourth place in 1987, their best finish in ten seasons. 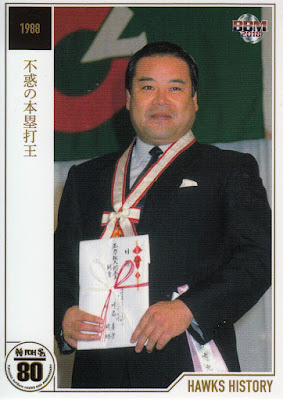 #HH17 - 1988 saw highs and lows for the Nankai Hawks.  One of the highs was that 40 year old Hiromitsu Kadota hit 44 home runs and drove in 125 runs and won the Pacific League MVP award.  One of the lows was that despite Kadota's performance the team again finished in fifth. 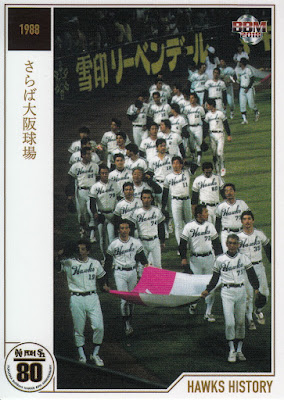 #HH18 - For much of the 1980's Nankai Electric Railroad's board of directors and their union leadership put pressure on Nankai president and team owner Den Kawakatsu to sell the team due to the team's declining performance and attendance.  Kawakatsu steadfastly refused to sell the team but he passed away in April of 1988 at age 87.  The board then sold the team to the Daiei supermarket chain who announced that they'd be moving the team to Fukuoka.  After 50 years, the Nankai Hawks were no more.  The card pictures a scene from the Hawks final game at Osaka Stadium on October 15th, 1988. 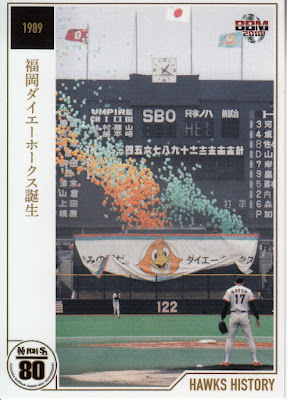 #HH19 - The newly renamed Fukuoka Daiei Hawks played their first game in Fukuoka on April 15th, 1989.  They played in Heiwadai Stadium, which had been home of the Nishitetsu/Taiheiyo Club/Crown Lighter Lions from 1951 to 1978.  The team finished in fourth place that year. 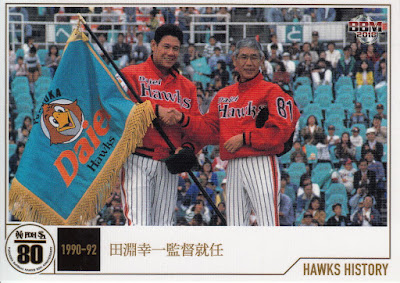 #HH20 - Sugiura (on the right in the photo) gave way as manager to Koichi Tabuchi (on the left) following the 1989 season.  Tabuchi managed the team for the next three seasons but failed to get them out of the second division, finishing fifth in 1990, fourth in 1991 and sixth in 1992. 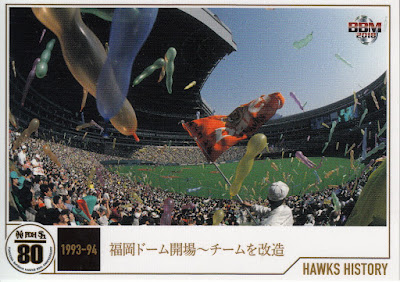 #HH21 - The Hawks moved into Fukuoka Dome in 1993.  Fukuoka Dome was the second domed stadium in Japan and the first (and only) stadium to have a retractable roof.  Rikuo Nemoto took over as manager but the change of home and leadership didn't make much of a difference - the team finished last in 1993 and fourth in 1994. 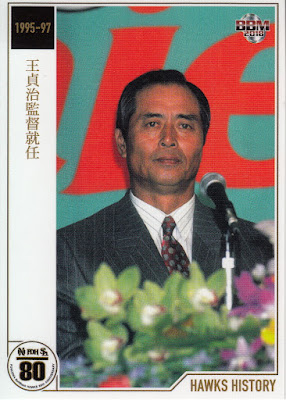 #HH22 - Sadaharu Oh was named manager of the Hawks for the 1995 season.  Unlike the previous half dozen manager, Oh managed to keep his job despite once again the team not getting out of the second division during his first couple seasons. 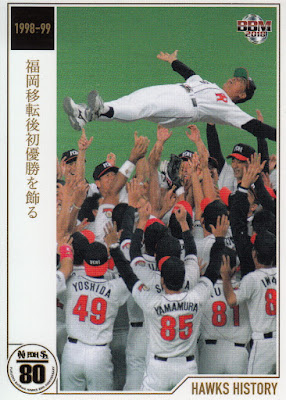 #HH23 - The team's patience with Oh paid off in 1998 when the team finished in third, their highest finish since 1977 and even more so in 1999 when Oh led the team to its first Pacific League pennant since 1973 and its first Nippon Series championship since 1964 (and the first championship by a team in Fukuoka since 1958). 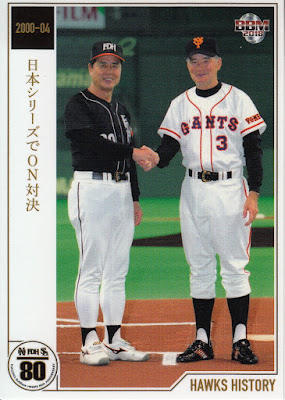 #HH24 - The Hawks repeated as Pacific League champions in 2000 and took on the Giants, who were managed by Oh's longtime teammate Shigeo Nagashima, in what was dubbed the "O-N" Series.  The Giants beat them in six games but the team remained successful over the following season, finishing in second in both 2001 and 2002.  In 2003 they again won the Pacific League pennant and defeated the Hanshin Tigers in the Nippon Series.  They finished in first place in 2004 but were defeated by the Lions in the inaugural Pacific League playoffs. 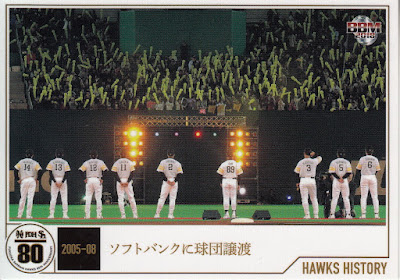 #HH25 - While the Hawks had a very successful first half of the 00's, their parent company Daiei did not.  They sold the team to Softbank following the 2004 season.  The team remained successful, finishing first in 2005 and third in each of 2006 and 2007 but were knocked out in the Pacific League Playoffs (which became the Climax Series in 2007) each season.  They dropped to last place in 2008, Oh's final season as manager. 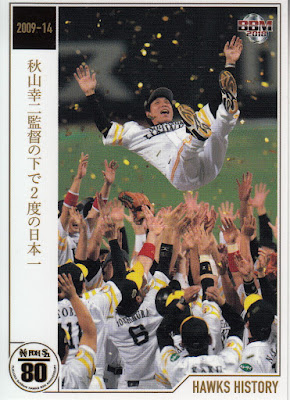 #HH26 - Koji Akiyama took over as Hawks manager in 2009 and would lead the team for six seasons.  The Hawks made the playoffs five times over that period of time, finishing first three times over that stretch (2010, 2011 and 2014).  They won the Climax Series twice and won each of the two Nippon Series they played in, defeating the Dragons in 2011 and the Tigers in 2014.  Akiyama stepped down in 2014 after winning the Series.  I think this photo is from the celebration for the 2014 championship - looks like Yuki Yoshimura is in the foreground (#6) and he didn't join the Hawks until 2013. 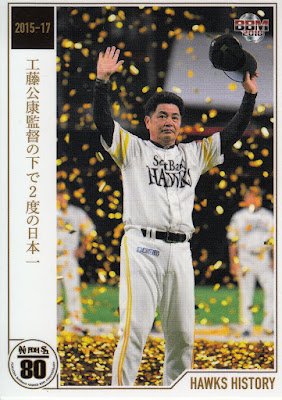 #HH27 - Kimiyasu Kudoh became the manager in 2015 and the Hawks didn't skip a beat as they defeated the Swallows for their second straight Nippon Series championship.  A second place finish in 2016 led to them losing in the Climax Series to the Fighters in 2016 but they returned to first place and the Nippon Series in 2017, defeating the Baystars in six games that season.  I'm pretty sure the photo is of Kudoh during the 2017 celebration as he's in a home uniform (the Hawks wrapped up the 2015 Series on the road at Meiji Jingu Stadium).

Since the cards were published the Hawks won yet another Series, this time against the Carp.  Kudoh has won the Nippon Series in three of the four years he's been manager.

The Hawks have played in 18 Nippon Series, the third highest total all time behind the Giants (34) and the Lions (21).  They are 9-9 overall.  What's interesting to me is that they have played the Giants in the Nippon Series 10 times and lost 9 of those Series.  They are undefeated against the rest of the Central League, having defeated the Tigers three times, the Dragons twice and the Swallows, Baystars and Carp once each.

I'd love to see BBM do more sets like this, either as a cross set subset or even as a stand alone set.
Posted by NPB Card Guy at 2:13 PM