Card Of The Week March 31

Opening Day for NPB was Friday and three of the six games that day went extra innings.  All three were won on walk offs by the home team (it would be very unusual to have a walk off by the visiting team of course) but none was more impressive than that of the Hokkaido Nippon-Ham Fighters.  The Fighters had been down 3-1 to the Buffaloes late in the game but tied it up with two runs in the bottom of the eighth.  Nippon-Ham loaded the bases with one out in the bottom of the tenth for Sho Nakata who ended the game emphatically with a grand slam: 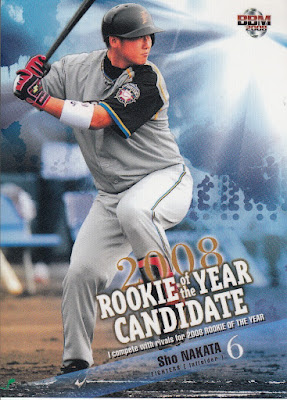 Despite his inclusion in this subset, Nakata wasn't actually a candidate for the Rookie Of The Year award in 2008 as he spent the entire season with the Fighters' farm team.  He made his ichi-gun Fighters debut in 2009 and didn't become a regular with the top team until 2011.  The actual 2008 Pacific League MVPRookie Of The Year was Satoshi Komatsu of the Orix Buffaloes who was not included in the subset.
Posted by NPB Card Guy at 7:49 PM