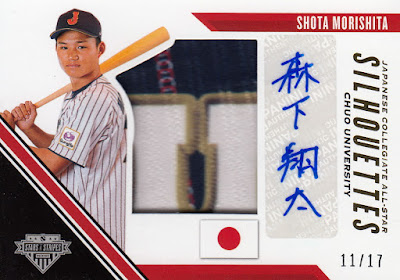 Panini issued their latest USA Baseball set called "Stars & Stripes" about a month ago and for the second year in a row the set includes autograph/memorabilia cards for last year's Collegiate Samurai Japan team.  This is the squad that played against the USA Baseball team in the 43rd USA vs Japan Collegiate All Star Series played last summer in Japan (Japan won 3 games to 2).

This is the third time Panini has done cards for the Japanese College All Stars (2019 and 2013 were their previous ones) and the fourth time a US company has done them (Upper Deck in 2008).

Here's the list of players in the set and their respective colleges.  Five of the players were in last year's set (Hiromi Ito, Ryosuke Kodama, Masato Morishita, Toshiya Sato and Takashi Umino) and seven of them were taken in last fall's NPB draft.

The two cards I have so far are both of the Silhouettes Signatures Jerseys Prime variety - the Shota Morishita card at the top of this post and this card of Kazuya Maruyama: 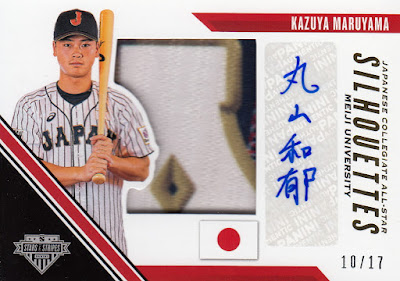 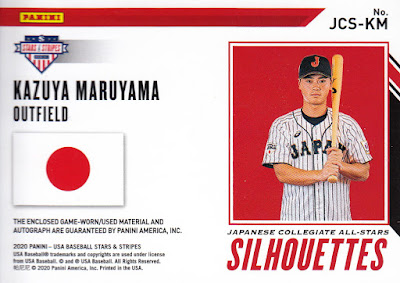 I'm kind of hoping that like last year there will be non-autograph/memorabilia cards available for the Samurai Japan team available in the "rack packs" of the set although it doesn't look like those are happening this year.
Posted by NPB Card Guy at 5:44 PM

Wow. Those patches are sweet. I really like the card design and Panini's decision to include these Japanese collegiate all-stars in their product.