Mail Day From Steve Plus One

I've been doing some somewhat convoluted trades with a collector named Steve for about a year now.  I say "convoluted" because generally he's not asking me for something I have in hand - he wants something he's seen in an auction in Japan and I ask Ryan to pick it up for me.  Unfortunately this means Steve has to wait for me to get my latest shipment of stuff from Ryan before I can forward his cards to him.  Fortunately for me, Steve has been generous enough to send me my stuff without waiting for the cards from Ryan.  I got a package from him the other day with my part of our latest trade.

The key card for this trade was this card of Takeya Nakamura.  BBM did an 12 card insert set of "Rookie Reprints" with the 2017 1st Version set and this reprint of Nakamura's 2002 1st Version card was included.  Steve had seen that Nakamura was one of my favorite current players (and probably the one player I'd consider doing a PC for) and offered me the card.

Steve also threw in these two cards - an IFT JCM 19 card of Kazuyoshi Tatsunami from 1988 and the 1990 Lotte card of Tatsunori Hara.  While I had some round menko cards that IFT did in 1988, I didn't have any of the rectangular ones so I was quite happy to get this.
He also sent me three KBO guidebooks from 2000, 2001 and 2003.  These turned out to be really interesting.  They're in English and were put together by Thomas St. John, a journalist who's been in Korea the better part of the last 30 years (I think - I'm not positive he's still overseas).  St. John's been involved with both the KBO and Korean baseball cards in the past so it was not a surprise that he was behind these guides as well.  The guides are kind of a combination of the NPB guidebooks the late Wayne Graczyk used to publish and the old Sporting News guidebooks for MLB.  They're all relatively thin - the 2000 edition has 40 pages, the 2001 edition has 48 and the 2003 edition has 64.  Each guide has a preview of each team for the season along the roster and portraits of the team's foreign players.  They also have the season's schedule, a guide to getting to all the ballparks, and a list of all KBO MVPs, Rookies Of The Year, Korea Series champions and foreign players.  The 2003 guide also has a couple articles - a profile of Shim Jong-soo of Hyundai and a review of the Samsung Lions' first championship in 2002.  Here are the covers of each book along with a couple pages from them: 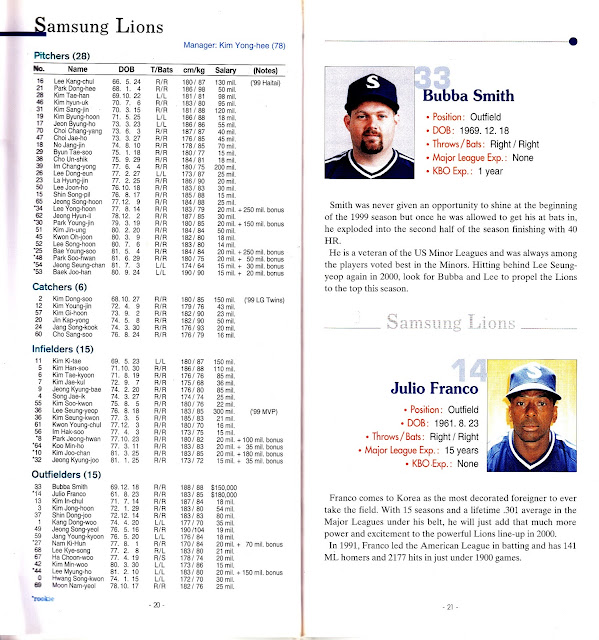 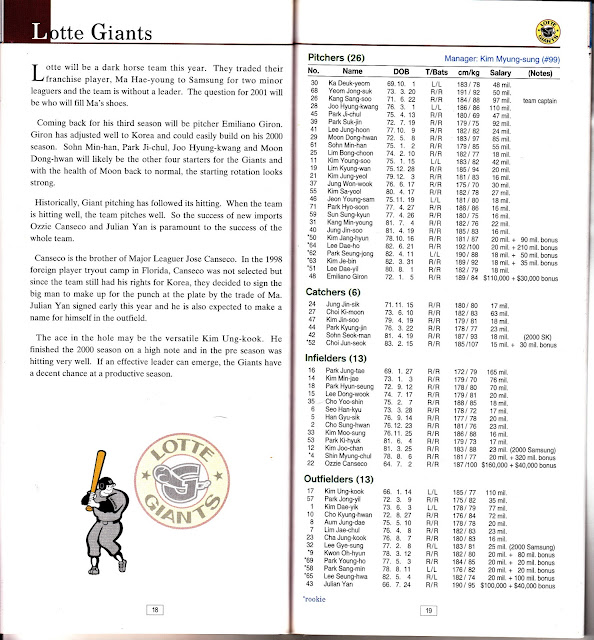 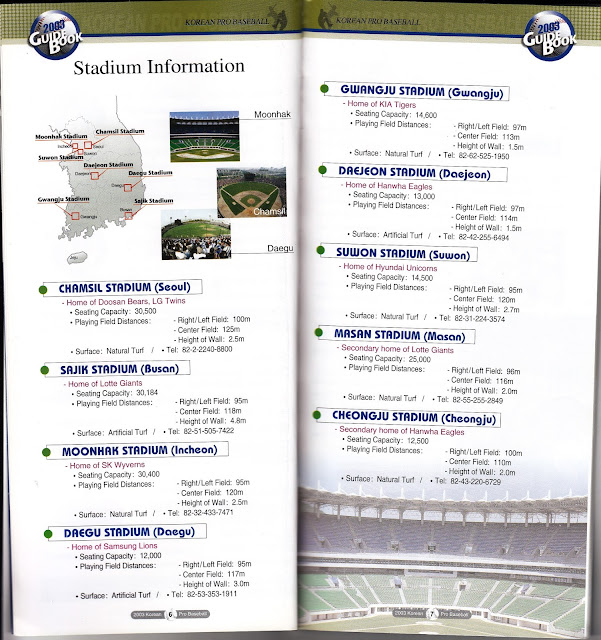 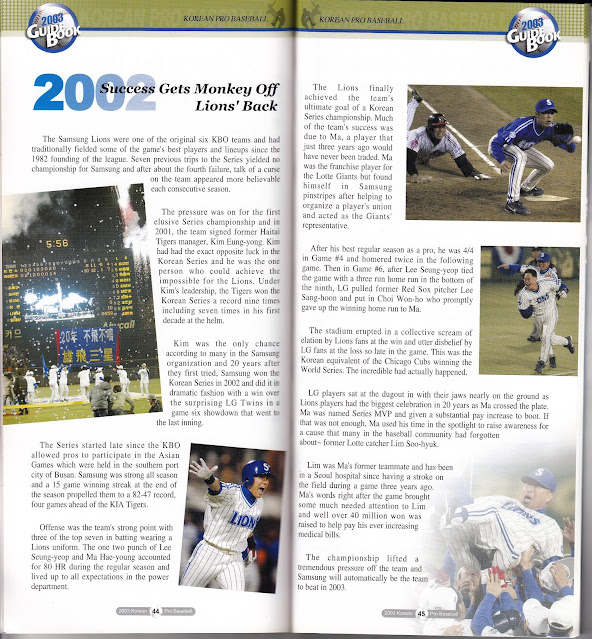 The last page of each guide has a blurb about Thomas St. John.  Here's the one from the 2000 guide: 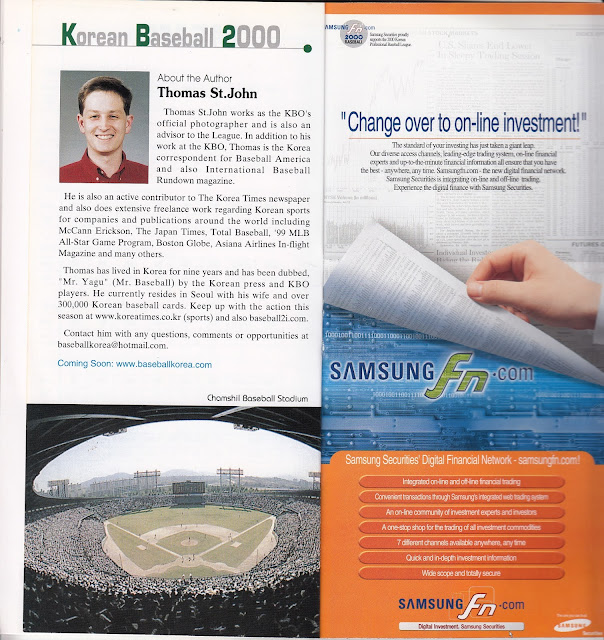 I find the idea of 300,000 Korean baseball cards intriguing.  St. John has told me in the past he's working on a Gary Engel-style checklist and price guide for Korean baseball cards but I have not heard anything about how it's going.
So thanks for the cards and the guidebooks, Steve!  I'll be sending you your stuff just as soon as Ryan ships me my next package!
Steve's package was not the only one I received that day.  I had picked up a lot of cards from the 2020 Calbee Samurai Japan set on Ebay because it included a couple of the signature parallels.  I had actually thought there were four signature parallels in the lot but it turned out there were only two - Hayato Sakamoto and Tsubasa Aizawa (I want to stress that this was a mistake on my part, not the seller.  I didn't pay close enough attention to realize the cards appeared in two separate photos):
Posted by NPB Card Guy at 10:30 AM

That Tatsunami cartoon looking card is cool... which is weird because if Panini did this for MLB players, I'd probably laugh at it.

Those KBO guidebooks look cool. I have a couple of the NPB ones.

@Fuji - I'm not a big fan of baseball cards with caricatures instead of photos but I kind of enjoy the IFT cards for some reason.

@Brady DiCarlo - I almost told Steve I didn't want them but I'm glad I didn't. They are really cool. Too bad Thomas St John doesn't still publish them.