I received a nice surprise in the mail last week - Dan Skrezyna had sent me an assortment of postcards and stickers published by the Yomiuri Giants back in 2008.  Dan has a player collection for Lee Seung-yeop and has picked up either Giants sets or card lots on occasion just to get the Lee cards.  He's been kind enough to send me the non-Lee cards and that's what he did again with these.

The Giants annually do a collection of staged photos of their players called "Giants Pride" that end up being published in a variety of methods.  They've appeared in BBM Giants team sets, card sets issued by the team, and stickers.  The postcards and stickers Dan sent me all feature "Giants Pride" images.

Dan sent me 10 postcards and 11 stickers - although only 10 of the stickers feature individual players.  Eight players appear on both a postcard and a sticker - Shinnosuke Abe, Tatsunori Hara, Michihiro Ogasawara, Hisanori Takahashi, Yoshinobu Takahashi, Yoshitomo Tani, Tetsuya Utsumi and Ryota Wakiya.  It's the same image on both the postcards and the sticker - here's the postcard and sticker for Hara as an example: 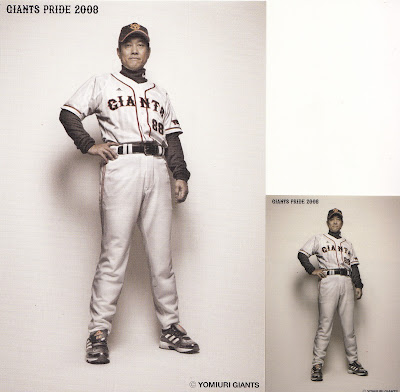 I should mention that the stickers are smaller than a standard sized card - they're about 3 inches high by 2 inches wide.

I mentioned that there was an eleventh sticker - it shows the whole team: 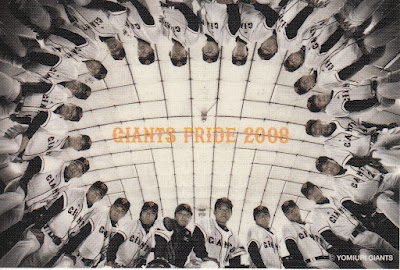 Dan actually sent me eight copies of this sticker.

Dan's got the checklist for the postcards up over at TCDB where you can see not only all the postcards he sent me plus the ones for Lee and Alex Ramirez (which I assume he sent to Ryan).

Thanks again for the cards, Dan!

Not sure how often NPB teams have Fan Fests where players sign for fans... but those postcards and stickers are perfectly designed for signatures.

Hadn't really thought about that but you're right. I think most teams have Fan Fests in November/December but I'm not sure how much opportunity fans have to get autographs at them.

Really love the team photo looking up at the dome.