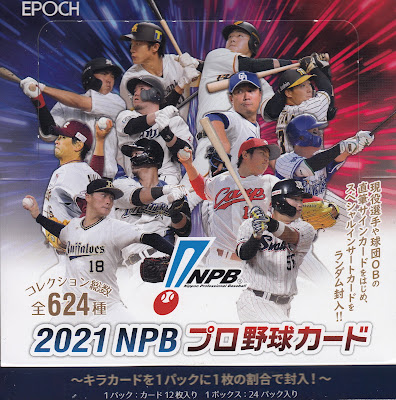 NPB, Epoch's annual "flagship" set, was released back on May 29th.  This is the fourth edition of the set and it's very similar to the earlier ones.

This set seems to always present problems for me and this year was no different.  I had to bid on six separate auctions for the set before I finally won one.  I got outbid by Ryan on one of the auctions although ultimately it worked out better for me - he paid more than 5000 yen for his set while the one I got was only 2500 yen!

The base set for this year's set supposedly contains 444 cards - same as last year - but there's a bit of a caveat on that.  There's 432 cards of active players (which works out to 36 cards per team) and 12 cards of OB players (1 for each team).  The twist this year is that the OB player cards (which includes Ichiro) are short printed.  Given the prices they've been pulling on Yahoo! Japan Auctions, they are apparently pretty rare.  I saw bidding on one of the Ichiro cards at 2500 yen at one point.  The set I got (obviously) did not include these and it appears from what I can tell that the set is considered complete with just the 432 active player cards.

Those 36 cards per team include cards for the manager and for all the team's "rookies" - which in this case means all the players taken in the regular (non-ikusei) portion of last fall's draft.  Since this set is 33% larger than the 324 "regular" cards in BBM's 1st Version set, there's a large number of player who have cards in this set but not 1st Version - 121 to be exact.  This includes guys like Chihiro Kaneko, Akira Neo, Yuki Saitoh, Kenshi Sugiya and Daikan Yoh.  This also includes a bunch of foreign players like Brandon Laird, Joe Gunkel, Jefry Marte, Ernesto Mejia, Rubby De La Rosa and CC Mercedes although it does not include any of the players who were new to NPB that didn't make it to Japan until after mid-February (Brandon Dixon of the Eagles, Justin Smoak of the Giants, etc).  There were 13 players who appeared in 1st Version who aren't in this set including foreign players Ariel Martinez, Raidel Martinez, Robert Suarez, Kevin Cron and Drew Verhagen along with Yoshihisa Hirano, who returned to Japan from a couple years in MLB.

I like the look of these cards.  I'm a fan of borderless designs and this is the second year in a row that Epoch has used one for this set.  I have my usual gripe about the lack of variety in the photos - way too many "batters batting, pitchers pitching, catchers catching" poses - although it seems they're a little better in this edition than in previous ones.  There are a handful of cards with the player (or manager) standing in front of a white background which is kind of odd.  I'm guessing that for whatever reason they couldn't get a photo of the player on the field.  Here's some sample cards:

The back of the cards looks pretty similar to the previous sets.  There's a headshot of the player that's cropped from the photo on the front of the card along with the player's stats from their last three years in NPB, even if those three years are 2011-13 as in the case with Masahiro Tanaka:

If you'd like to see the rest of the cards from the set along with some of the parallels and inserts (but not the short printed OB cards), Jambalaya (as usual) has them all on-line here.