When I did my post about what I called the "10 Worst NPB Sets Of All Time" (which was really just my least favorite sets) about a month ago, Sean commented that while he was initially surprised I didn't list any Calbee sets in the post, he soon came to the realization that recent Calbee sets are just mediocre but not truly bad.  I responded that I like to think of Calbee as "steady" as opposed to mediocre.  But now that I have the first Calbee set of 2022 in my hands, I may have to reconsider.

Which really isn't a problem to me - I actually really like the spartan design of the Calbee cards.  I like my baseball cards with full bleed photos and a minimum of distraction.  However, I also like them with interesting photos and that's where this year's Series One set really falls flat.

Now both Sean and I have beaten up on Calbee's photo selection quite a bit in recent years.  There's generally way too many cards with "pitchers pitching, batters batting and catchers catching" and not nearly enough of anything else.  But this particular set seems to have really outdone the usual Calbee dullness.  There really isn't an interesting photo to be had in the entire set.  Almost all of them are either "pitchers pitching" or "batters batting" - there's exactly two "catchers catching" (Tomoya Mori and Yuhei Nakamura).  There aren't even any cards that use a horizontal design to break up the monotony.

The player selection is pretty weak as well.  Since Calbee doesn't usually have multiple cards of a player in the same Series and the "Title Holder" subset has some of the major stars, there's not a lot of big names in the "regular" player cards.  The biggest names are probably Mori, Takeya Nakamura, Takehiro Norimoto, Ryosuke Kikuchi and Norichika Aoki.  To be fair - it's not unusual for Series One to be light on stars and Series Two and Three will most likely make up for it.  But Calbee also didn't include any rookies in this set or any players who switched teams over the winter.  In fact I'm fairly confident that all the photos were taken last season - especially since the Fighters are all shown in their old uniforms (although the team logo has been updated).  Here's some example cards:


The "Title Holder" subset includes cards of 19 players who either won awards or led their league in some statistical category last or did both.  As I mentioned before, this subset includes several of the bigger stars in NPB right now - Munetaka Murakami, Yoshinobu Yamamoto, Kazuma Okamoto, Masataka Yoshida and Koji Chokamoto.  It does not include any league leaders who departed for MLB in the offseason so there's no cards for the Central League batting champion (Seiya Suzuki) or saves leader (Robert Suarez).

The four checklist cards show highlights from late last season as well as the post-season.  There's a card for the Swallows winning the Nippon Series, the Buffaloes winning the Pacific League pennant, Leonys Martin hitting a game-tying home run in Game Two of the First Stage of the PL Climax Series which eventually resulted in the Marines beating the Eagles in that Stage and Yuki Nishi getting his 100th career win on September 10th.  The cards for the Swallows and the Buffaloes are the only cards in the set that use a horizontal layout.

The backs of the checklist cards are also the only place in the set that mentions that this is the 50th year that Calbee's been doing baseball card sets - there's a little circle that says "50" (even though it kind of looks like it says "58") next to the "2022" in the Calbee logo: 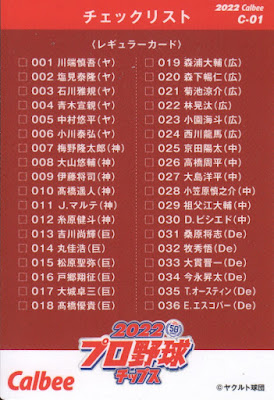 So obviously I'm kind of disappointed with this set but I expect that the later two sets this year will be better.  Last year Series One was pretty unimpressive but Series Two was an improvement and Series Three was even better.  Let's hope history repeats itself this year.

As always you can see all the cards - including the "Star" and "Legend" inserts and the related limited "Clutch Hitter" box set - over at Jambalaya.  You know, in case you need a cure for insomnia.

On thinking it over I agree with your assessment that "steadY" is a better term than "mediocre" for Calbee in terms of the design (simple is better).

But yeah, its another set this year with a steady design but mediocre photography. The checklists seem to be the only ones with interesting pictures on them once again.

I'm finding that since I am putting them together bag by bag this year rather than getting the whole set in one go like usual the bland photography isn't so noticable yet. Once we've completed the set the full impact of that will undoubtedly sink in though.