Ho, hum, another week, another Card Of The Week involving a no-hitter or near no-hitter...
On Wednesday of last week, Hawks pitcher Nao Higashihama threw a no-hitter against the Lions.  He struck out six and walked two but erased both base runners on double plays so he faced the minimum 27 batters.  Higashihama's gem came just hours after Reid Detmers of the Angels no-hit the Rays making it the first time there was a no-hitter in MLB and NBP on the same day (well, same day in Japan although not the US) since July 21st, 1957 when Bob Keegan of the White Sox no-hit the Senators (July 20th in the States) and Masaichi Kaneda of the Swallows threw a perfect game against the Dragons.
Higashihama was Softbank's first round pick out of Asia University in the 2012 draft and to some extent overshadowed by several of the other picks in that draft - namely Shohei Ohtani, Seiya Suzuki, Tomoyuki Sugano, Takehiro Norimoto and even Shintaro Fujinami.  I've always kind of unfairly thought of him simply as the "other guy" who with Ohtani had a promo version of their cards from the 2013 BBM Rookie Edition set in Sports Card Magazine #97: 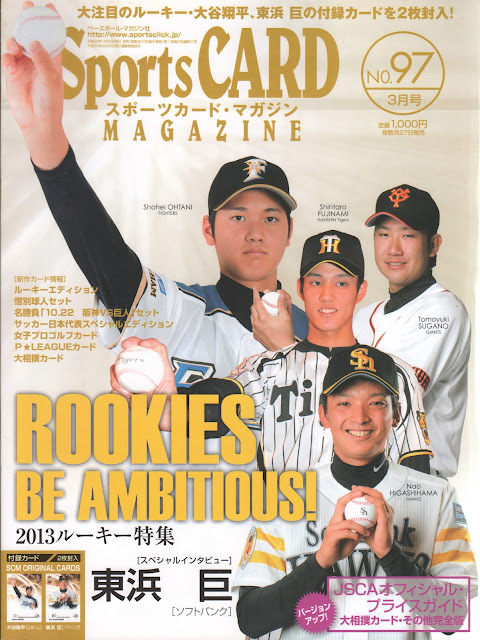 But which of the 2012 draft picks did SCM actually have an interview with in the magazine?  Was it Ohtani?  Sugano, the nephew of the 2012 Nippon Series winning manager?  Nope, it was Higashihama.  Here's his card that was issued with the magazine (SCM #207): 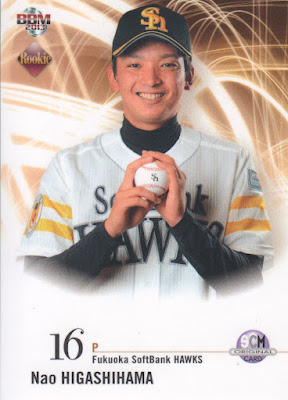