Akira Neo was one of the top high school prospects going into the 2018 NPB draft.  He was a two-way player with the powerhouse Osaka Toin team, playing pitcher, shortstop and outfield depending on the situation.  He and his team took part in several Koshien tournaments - both the spring and summer versions - including spring championships in both 2017 and 2018 and a summer championship in 2018.  He was chosen by four teams in the draft - the Dragons, Fighters, Hawks and Giants - and the Dragons won the lottery for his rights.  Chunichi signed him with the intention of him playing shortstop for the team.
There's been a problem, however, with the plan - Neo doesn't appear to be able to hit as a professional.  He spent almost all of 2019 with the farm team and hit .209 in 110 games.  He was called up to the ichi-gun level at the end of the season and went hitless in two games.  He hit .238 in 80 games at ni-gun in 2020 and just .087 in nine games with the top team that season.  Last year he didn't break the Mendoza Line at either level - he hit .178 in 72 games with the top team and .157 in 34 games down on the farm (although he did hit a grand slam for his first career home run at ichi-gun).  This year so far he's hitting .241 in the minors and .188 with the top team.  The Dragons have tried moving him to the outfield but it doesn't appear to have helped much.   His career average in ichi-gun is .188 in 100 games.
Perhaps in desperation to get some value out of Neo, the Dragons have resorted to a novel approach - maybe he can pitch!  He made an appearance on the mound for the farm team a few weeks ago against the Tigers and the results weren't very good - he faced five hitters over 2/3 of an inning, giving up a run on three hits although he recorded a strikeout and reportedly hit 150 kph (~93 mph) with a pitch.
Yesterday the Dragons were in the process of being blown out by the Carp for the second consecutive day.  Down 10-1 going into the eighth inning, Chunichi manager Kazuyoshi Tatsunami decided to spare his beleaguered bullpen and summoned Neo to take the mound.  He did reasonably well in his ichi-gun pitching debut, giving up a single to the first batter he faced but then retiring the next three (although he didn't strike out anyone and it's possible the Carp were just tired from all the base-running they'd been doing the two previous games).  He did hit 150 kph a couple of times though.  It'll be interesting to see how this goes and whether the Dragons will continue to use him as a two way player or make him exclusively a pitcher.  While I can think of several recent examples of NPB players who started out as pitchers and then converted to position players (Kazuya Fukuura, Yoshio Itoi, Yuhei Takai, Ryuji Miyade, Fumikazu Kimura), I haven't been able to come up with anyone who went the other direction.
Here's Neo's 2019 Epoch One card (#666/CD-058) commemorating his ichi-gun debut on September 29th - I expect there'll be one for his pitching debut released later this week: 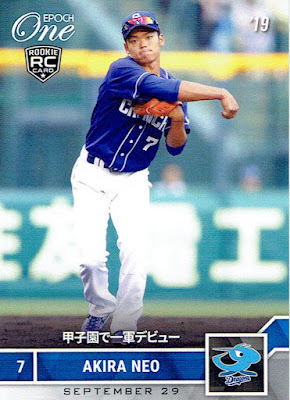 I was watching that game against Hiroshima with my son on TV but we turned it off when the score got up to 9-0. Its interesting that Neo pitched in it. Its kind of sad seeing how bad he's been playing and not living up to the expectations. Sort of an apt analogy for the Dragons performance in general these days actually.....