Three Is A Magic Number 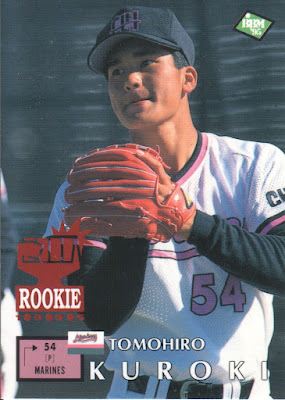 I got a package in the mail today from Japan that contained my latest Yahoo! Japan Auction purchases.  The bulk of the contents were the 2022 Calbee Series One and BBM 1st Version sets which I will be doing posts on in the next week or so but there was one other item in the box I wanted to mention - the 1995 BBM card Tomohiro Kuroki (#565) shown above.  This card along with three other cards that Ryan has for me completes my 1995 BBM set - something that as recently as two years ago I would never have believed possible.
Ryan is also holding onto a number of 1996 cards for me (including a trio of cards I bought from Larry Fuhrmann and had shipped to Ryan) so I am down to only needing three cards for that set now.  Which also means that I'm now just three cards away from a complete run of BBM "flagship" sets from 1991 to the present.  And I learned as a kid that three is a magic number...
Posted by NPB Card Guy at 8:19 PM

Congrats on finishing the 1995 BBM set!

The last three cards you need are always the most fulfilling to actually get.

Just found the 3 cards you need to complete the set:

Let me know if you need my help with the last one.

@twycchang - Thanks! Just sent those Mecari auctions to Ryan who can hopefully grab them and sent you a message about the checklist card. fingers crossed that this may actually be finished!