Roki Sasaki cards started showing up a lot on Ebay following his perfect game back in April and I've been wanting to put out a post on his rookie cards ever since then.  It's been a busy couple of months though so I'm just getting around to it now.
Sasaki was the Marines' first round pick in the 2019 draft so all his rookie cards are from 2020.  Here's the 10 cards that I have from that year:

He has additional base set cards in the 2020 BBM Rookie Edition Premium (#10) and Epoch Pacific League Premier Edition (#35) sets and insert cards from the BBM 2nd Version ("Breaking Now" #BN04), BBM Marines ("Infinite Possibilities" #IP1), BBM 30th Anniversary ("All Stars" #AS10) and Epoch NPB ("Silver Foil" #SF16) sets.  He also has a "secret version" (short printed photo variant) of his Rookie Edition card and a much rarer "ultra secret version" of his 2nd Version card.  And I'm not getting into the myriad of parallel versions that exist or his autograph and memorabilia cards.
I think what's probably the rarest of his rookie cards is from the Epoch One Signature Set for the Marines.  This was a 14 card set sold online by Epoch in late November of 2020.  It was limited to only sixty sets and was only on sale for three days (or until all 60 sets were sold out).  The set retailed for 30,000 yen (about $300 at the time).  The 14 cards included a 12 card "base set" of Epoch One cards with printed autographs plus two cards with real autographs.  Sasaki did not have a "regular" Epoch One" card in 2020 but Epoch included him and the other 2019 draft picks in this set.  I swiped these images of his card from this set from an Ebay auction: 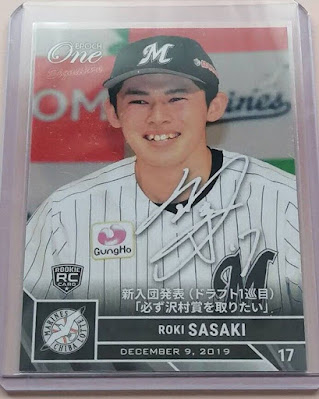 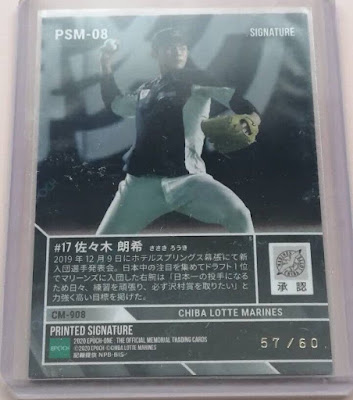 The card is on sale on Ebay for $600 although you can buy the EXACT SAME CARD (57/60) on Yahoo! Japan Auctions for the low low price of 40,000 yen (around $300 or half of the Ebay auction).
And just think - if the printed signature card with a print run of 60 is going for that much, how much is the authentic autographed card with a print run of 10 going for?
Posted by NPB Card Guy at 10:03 PM