I mentioned in yesterday's post that Yoshinobu Mizukami of the Lions was the Pacific League's Rookie Of The Year this year.  Mizukami was originally drafted by the Lions two years ago as an ikusei or development player.  Ikusei players are not on the team's 70 man roster and are generally considered long shots although a number of star players have started out that way - the biggest name being Kodai Senga.  Mizukami is the first former ikusei player to win the Pacific League Rookie Of The Year and (I think) the third to win the award in either league - Tetsuya Yamamoto and Tetsuya Matsumoto, both from the Giants, won the awards in 2008 and 2009 respectively.

As far as I can tell, Mizukami had three baseball cards last season and they cover his transition from being an ikusei player to being a 70 man roster player.  His first card was in BBM's Rookie Edition set (#034) where his three digit uniform number indicates he's a development player.  While BBM includes all the newly drafted ikusei players in the Rookie Edition set, they do not include them in either their flagship or team sets.  Epoch doesn't include them in their flagship NPB set but on occasion will include them in their team sets.  One of those occasions was last year's Lions Rookies & Stars set where Mizukami is still shown as an ikusei player (card #17).  He was added to the 70 man roster on May 13th last season and pitched 27 innings for the ichi-gun team - just under the amount (30 innings) that allowed him to still qualify as a rookie this year.  His first card showing him on the "official" team roster was from the "1st Version Update" subset in BBM's Fusion set (#608) - his uniform number is now a two digit number. 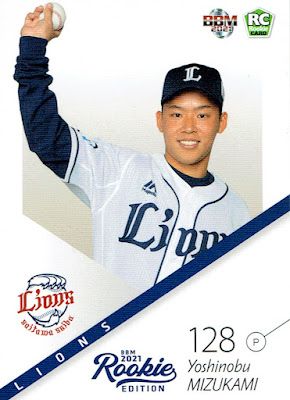 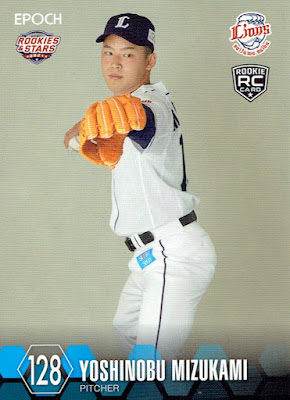 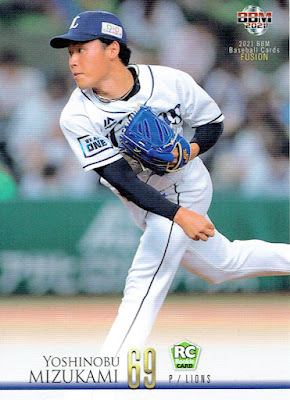