Card Of The Week September 7

As mentioned before, I've got a bunch of cards of Yonamine in nostalgic sets and subsets. I've also got a couple cards from the 70's when he was Dragons manager and a coach for the Giants. But I've only got one card of him from his playing days. Or do I?

There's a set of bromide cards that Gary Engel's "Japanese Baseball Card Checklist And Price Guide" refers to as "JBR 6 - Marusho 4 in 1 B & W". They are very small (1 inch by 1 1/2 inch) cards that are typically found in groups of 4 or more (the book says groups of 16 or prize sheets of 80 - I have some groups of 8). The front of the card is simply a black and white picture of the player. The backs are typical of many of the pre-1970 bromides and menkos - a playing card designation (like 10 of hearts), a "rock-paper-scissors" symbol and a baseball play written in katakana. Obviously the intent was for kids to cut these down to individual cards and play games with them. So there's no biographical information about the players on the cards at all. How do we know who the players are?

Gary Engel has done the legwork here. There are 66 individual cards in the set and he has identified 57 of them. According to the book, the card I'm showing here shows (in clockwise order) Masayuki Dobashi of the Flyers, Tatsuo Okitsu of the Carp, Wally Yonamine of the Dragons and Jun Hakota of the Swallows: 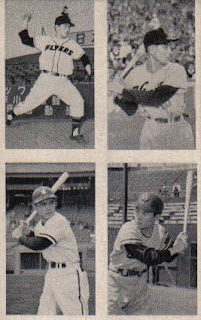 There's a problem with this identification, however. The book lists this set as being from 1960. Yonamine didn't join the Dragons until 1961. So either the set is not from 1960 (FWIW the Flyers uniform Dobashi is wearing is from 1960 not 1961) or the card is NOT Wally Yonamine. (To be honest, I don't think the picture looks like him, but it's hard to say.)

Hi All
That is NOT Wally Yonamine. I'm 100% sure
Rob Fitts

I was afraid of that.