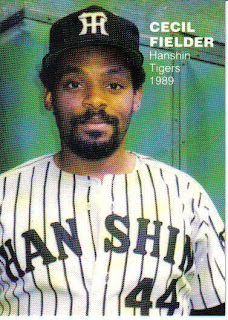 This is a 1989 "Big League Starz" card of Cecil Fielder. There were cards of Fielder in the 1989 Calbee, Takara and Lotte sets (as well as a rumored card in the 1990 Lotte set). Those cards were all licensed by NPB and (I assume) the Japanese Pro Baseball Players Association (JPBPA). The "Big League Starz" card was not. Someone printed up the cards in 1990 and sold them wherever they could, probably to people who didn't know (or really care) any better.

I picked the card up on eBay for next to nothing (and I knew at the time it was unlicensed). I have noticed every year since Ichiro came over that there have been cards on eBay for the new Japanese players that I've never seen before. Cards like this one of Akinori Iwamura: 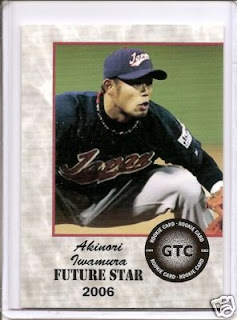 Now, I don't understand all the legal stuff that goes on with licensing and baseball cards, but I strongly suspect that cards like this are unlicensed.

So anyway the big news right now is that Junichi Tazawa is officially signing with the Red Sox tomorrow. As far as I know, there are no baseball cards that exist of Tazawa. I do not believe that his industrial league team has any baseball cards. But I predict that before spring training, someone will be selling a baseball card of Tazawa on eBay. It'll say "Future Star" or something like that on it or possibly the seller will claim it's a Japanese card of Tazawa. But it'll be unlicensed and essentially worthless.
Posted by NPB Card Guy at 3:46 PM

I dunno about "worthless". Back during the boom days, I always kind of liked the unlicensed "Broder" issues that came out every year. They almost always had better photography than what the licensed companies were issuing. I'd love to see more of this kind of thing since the licenses companies never catch on to the demand, instead the producers of the unlicensed cards just get sued and shut down (for awhile).

I'm not a fan of price guides being the "official" arbiter of whether or not something has value. I'm currently chasing down a third unlicensed Hensley Meulens card that I didn't know existed until recently. I still don't know if there were any issued of Tuffy Rhodes when he was still just Karl trying to break into the Astros outfield (hey, there are unlicensed cards of Tracy Jones and Casey Candaele, so why not Tuffy?).

Well, maybe "worthless" was a bit much.

I think unlicensed cards are kind of like bootleg records. You're producing (and potentially making money off of) something that you don't have a legal right to. BBM and Calbee pay fees to the NPB teams and the JPBPA for the rights to reproduce the images. The guys who produced these cards didn't. It doesn't really matter if the cards have better photography than the licensed companies. They don't have a legal right to produce the cards.

Of course, that said, I have bootleg records in my music collection and a handful of unlicensed cards in my card collection. I guess what aggravates me the most is that someone's trying to convince people that these are legitimate cards.

I understand where you're coming from, and no, someone shouldn't be mass producing cards using properties they have no legal right to use for resale.

But I also approach it from the customer side...like with a bootleg concert...how often does the purchase of that bootleg come at the expense of an artists legitimate release? Or with people who make bootleg videos of old TV shows that the networks don't seem to have any interest in releasing themselves. Is any money being taken out of the pockets of the actual copyright owners? No. Are these items still illegal, absolutely. Am I any less likely to pick one up because of said legal issue? Nah.

I just see another cool card I want to add to my collection! For everyone else, caveat emptor.

I'm trying to find out more information about the 1990 Cecil Fielder Lotte card you mentioned in your blog.

Can you provide more details on this card? I haven't been able to find much out about it on the internet.

From Engel's price guide & checklist: "It is claimed that a few Cecil Fielder #117 cards were printed, but they are not part of the regular set, as they must have been withdrawn very quickly." He lists the card at $500, but it's not clear to me that anyone has actually seen one.

To be honest, I kind of doubt the existence of the card as it would be somewhat unusual for a Japanese card set to feature a "regular" card of a player from the previous year who was no longer playing in Japan.

Oddly enough, I think I may inadvertently found this card in a shoebox with some other sports cards.

Here is the description:

1990 Cecil Fielder Lotte Card
No. A 117 with misspelling (last name misspelled on stats side as Fieldar).

I'd be happy to scan the card and email it to you to review.

Wow! That'd be a hell of a find. I'll take you up on your offer of a scan. Please send it to npbcardguy@gmail.com. Thanks.

I will point out, however, that the 1989 Lotte card for Fielder is also card #117 and is known to be misspelled "Fieldar". So not to throw too much cold water on you, but it's possible what you have is actually the 1989 card. Still considered a valuable card (book is $150) but not confirmation that a legendary card actually exists.

The scan is on its way to you now.

The date is really throwing me off. This card shows a date of 1990.

In any case, I am glad I found this blog. The information has been quite useful.