As always, I'm a little late getting around to this.  The set was released back at the beginning of August but I didn't get my hands on a set until about two weeks ago.  The set contains 315 total cards.  For the third year in a row, there are 18 "regular" player cards per team, for a total of 216 cards.  BBM's got their usual fine photography, although it strikes me that a great deal of the pictures simply show pitchers pitching and batters batting.  The shots of fielders fielding and base runners running bases seem much more infrequent to me, but maybe I'm just looking for something to say.  Here's some example cards:

The card numbers are numbered starting at #407, picking up where the 1st Version left off.

As usual, there's a number of players who had cards in the 2nd Version but not in the 1st Version.  They are Shinji Iwata, Kenichi Nakata, and Soma Yamauchi of the Dragons;  Kenji Akashi, Nagisa Arakaki, Tomoaki Egawa, and Kenji Ohtonari of the Hawks; Ryota Arai of the Tigers; Shota Dohbayashi, Yoshikazu Kura, and Kan Ohtake of the Carp; Hiroshi Kisanuki, Evan Maclane, Fumihiro Suzuki and Shohei Tsukahara of the Buffaloes;  Hironori Matsunaga and Ryoma Nogami of the Lions; Kelvin Jimenez, Wataru Karashima, Kenji Tomura and Ginji (Akaminai) from the Eagles; Ryosuke Morioka, Takehiro Oshimoto of the Swallows;  Giancarlo Alvarado, Shigeru Kaga, Takayuki Kajitani, Masaaki Koike, Norihiro Nakamura, Kazunari Tsuruoka, Shogo Yamamoto and Yuki Yoshimura from the Baystars (almost half the players) and Shoki Kasahara, Ryosuke Miyaguni, Yoshitomo Tani and Takayuki Terauchi of the Giants.

The set also includes the now standard "1st Version Update" subset.  This is 36 cards (3 per team) using the same design as the 1st Version cards.  In past years, this has included players traded during the season who had cards in the 1st Version set with a different team.  This year, however, it is only players that for whatever reason did not appear in the 1st Version set, including some foreign players (Josh Whitesell, Hayden Penn, Bobby Scales, etc) and some players returning this year from the US (Hideki Okajima and Kei Igawa) along with guys BBM just didn't think would be contributing this year (like Masa Yamamoto).  For some reason, BBM decided to include Shota Dohbayashi of the Carp and Ryosuke Miyaguni of the Giants in both the regular 2nd Version cards and the 1st Version update subset.  Here's a couple examples cards:


It looks like the cut off for a late signing player to get included in either the 1st Version Update or a 2nd Version regular card was around the middle of May.

The theme for the 12 team checklists of the set is highlights from the first two months of the season.  This includes Atsunori Inaba and Shinya Miyamoto reaching 2000 hits, Masa Yamamoto becoming the all time wins leader for the Dragons, a couple walk off home runs and other milestones.  Kenta Maeda and Toshiya Sugiuchi's nohitters are included - Sugiuchi's was the latest event honored (May 30th):


The final subset for the set is the second installment of the cross-set subset "Cross Blaze".  There are 3 cards per team (36 in all) that continue the subset begun in 1st Version (and concluded in Genesis).  As with the 1st Version cards, the 2nd Version "Cross Blaze" cards feature the image of a player on the front superimposed over a background of fire with the original picture on the back of the card.  The cards are not numbered as part of the 2nd Version set but separately with a "CB" prefix.  Here's Norihiro Nakamura's card (#CB104): 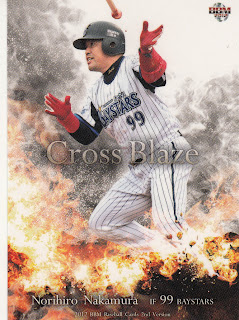 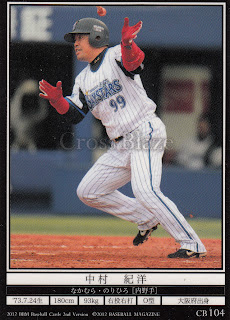 All the 2nd Version cards (including the "Cross Blaze" and various insert and memorabilia cards) can be seen here.

UPDATE - Just realized I left out one of the First Pitch celebrities - singer Risa Yoshiki.  I also want to point out that a couple of the celebrities have appeared in this subset before - Arakawa (2006) and Minami (2008).
Posted by NPB Card Guy at 10:22 PM