Card Of The Week October 14

Yuki Nishi of the Orix Buffaloes threw the third no-hitter of the 2012 NPB season last Monday.  It was the regular season finale for both the Buffaloes and the Fukuoka Softbank Hawks, so it was the final regular season game for Hiroki Kokubo.  This was only the second time in Japan that a pitcher threw a no-hitter in his team's last regular season game.  The only other time it happened was in 1937 when Mitsuhiko Ishida of Hankyu turned the trick against the Tokyo Senators. 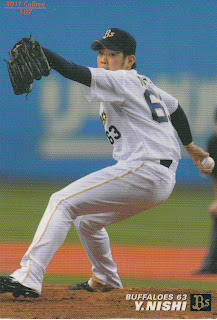