Card Of The Week October 28

The Chiba Lotte Marines named former Lions catcher and manager Tsutomu Itoh as their new manager a couple of weeks back.  Itoh's one of my favorites (I think I have a soft spot for catchers who play forever - Itoh, Tanishige, Nomura, etc) and this gives me an opportunity to show off a couple of cards of him that I've picked up recently.

The first one is Itoh's 1982 rookie card from the Takara Lions set (one of the other rookie cards in that set was someone named Kimiyasu Kudoh): 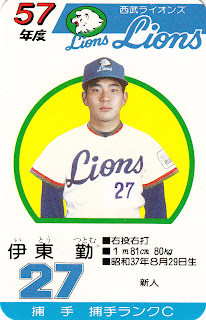 The other is a 1989 Calbee card (#52) showing what I'm pretty sure is a play from the 1988 Nippon Series as that looks a lot like a guy in a Dragons uniform trying to score: 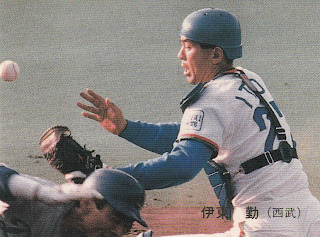