Card Of The Week September 17

From time to time over the years Calbee offers cards that are only available as part of some sort of mail in redemption process.  A couple of times the cards available have been oversized cards.  The first time they offered the oversized cards was in 1973 and I don't have any of those cards (they are extremely scarce).  They did it again in 1990 and 1991 and I have a couple examples of those.

The 1990 Calbee Big cards were issued in two series.  The first series contained 16 cards while the second series contained 28.  The cards in both series were 3 1/2 inches by 5 inches.  The photos on the first series cards had a border and also had the player's name in English, the team logo and the player's uniform number.  The backs of the card had the usual information that Calbee was putting on the backs of the cards at the time: 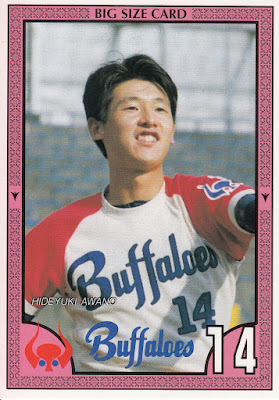 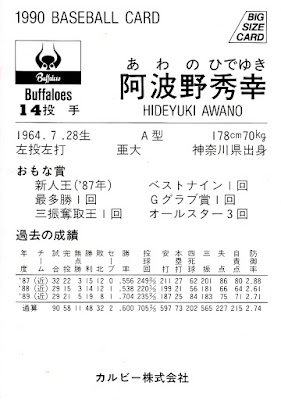 The cards also came with a little frame that could be folded to display the card like a picture frame: 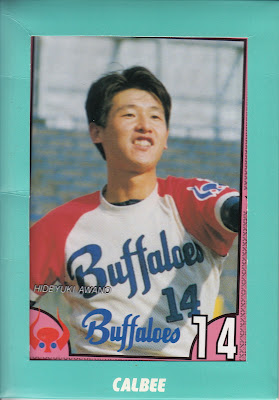 The fronts of the second series cards (which I don't have) simply showed a full bleed photo of the player along with a facsimile autograph.  The backs were blank.  According to Engel (where I'm getting most of the background information for these cards from) the cards were issued with a plastic holder of some sort.

At 3 3/16 inches by 4 19/32 inches the 1991 cards were slightly smaller in size than those of the previous year.  The fronts had a full bleed photo of the player along with the player's name in English - very similar to the design of the regular Calbee cards that year.  There were 24 cards in the set and each card had player info on the back that was similar to the info on the back of the regular cards.  These cards were also issued with a plastic holder. 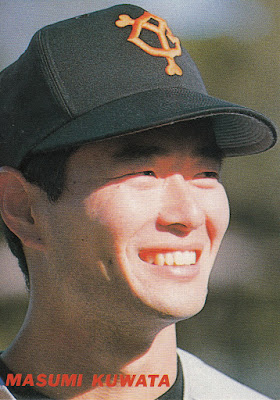 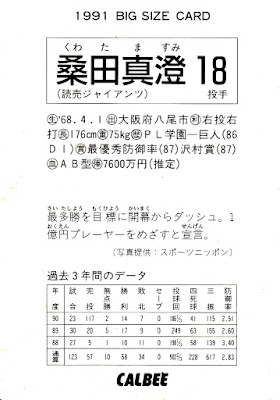