Card Of The Week September 10

On Friday Takashi Toritani got his 2000th career hit, becoming the fourth player to do so this year (following Masahiro Araki, Norichika Aoki and Shinnosuke Abe).  I'll hopefully get around to doing a post on Toritani later this week but I wanted to mention that there are two other players who are "close" to 2000.  One of them is Seiichi Uchikawa of the Hawks who has been stuck at 1970 hits since breaking his thumb in late July.  Uchikawa might be able to play some more this season but obviously it's not likely that he'll get 30 hits in the handful of games he'll get into.  The other player is Kazuya Fukuura of the Marines who as of today is at 1959 hits.  I've found it kind of odd that folks have been treating Fukuura reaching 2000 hits as being imminent - there's a "Fuku-Meter" countdown on Pacific League TV's home page and the Marines were giving away a Fukuura bobblehead with a countdown counter on it a few weeks back.  He came into this season needing 67 hits to reach 2000 and he's only had 26 hits since then.  It's going to be next year at the earliest that he's going to reach the milestone and maybe not even then.  He'll be 42 next year and you wonder if some point either he or the Marines are going to decide it's not worth the effort.

Fukuura has been with the Marines since the 1994 season (he was their 7th round pick in the fall 1993 draft) but he was originally a pitcher - I'm not positive but I don't think he switched to being a batter until 1997.  He apparently had some shoulder issues that prevented him from continuing as pitcher.  He debuted with the top team in 1997 and was pretty much a regular starting the following season.  He lead the Pacific League in batting in 2001 - the first player to lead the PL in batting other than Ichiro since 1993 (of course that might only be because Ichiro was in Seattle in 2001).  Here's his rookie card from the 1994 BBM set (#529) when he was still a pitcher: 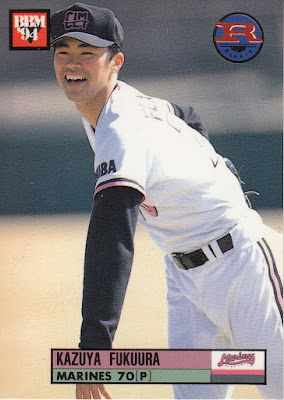 One quick note - you may have noticed that I haven't been posting as much as usual over the last few months.  I hurt my back again in mid-June and it was difficult to sit at my computer much.  I had surgery on my back about a week and a half ago and my ability to sit at the computer was pretty much non-existent until late last week.  I've been improving a lot in the past few days so I'm hoping that I'll be able to pick up the pace again this week.
Posted by NPB Card Guy at 8:19 PM

Dang, sorry to hear about your back. Get better soon!!

Sorry to hear about the back, hope it continues to improve!

Its interesting that so many are getting to 2000 one after the other these days, its getting to be an almost daily occurrence!