Card Of The Week September 3

Here's a trivia question for you - who was the pitcher who gave up Sadaharu Oh's 756th home run?  It was Yasujiro Suzuki of the Yakult Swallows.

Suzuki had a couple good years as a starter with the Swallows in the late 70's going 14-9 in 1977 and 13-3 in the Swallows championship year of 1978 (although he lost both his starts in the 1978 Nippon Series).  He made the All Star team both of those seasons.  He was originally drafted by Yakult from Nikko Hitachi of the corporate leagues in the fifth round of the 1972 draft.  He spent 10 years with the Swallows (although his first two seasons were spent exclusively with the farm team) before they traded him to Kintetsu in the 1982-83 offseason.  He worked out of the Buffaloes bullpen for four seasons (making the All Star team again in 1984) before retiring after the 1986 season.   He apparently is also known as Kojiro Suzuki - I think it has something to do with different ways of reading the kanji for his name but I'm not sure I'm getting that right.

There were a fair number of cards of Suzuki from his playing days - mostly Takara cards but a handful of Yamakatsu.  It looks like he only ever had one Calbee card - it's in the 1982 set and he's under the name Kojiro on it.  Oddly enough he doesn't appear to have any cards since his retirement - he doesn't show up in any of BBM's or Epoch's OB sets. 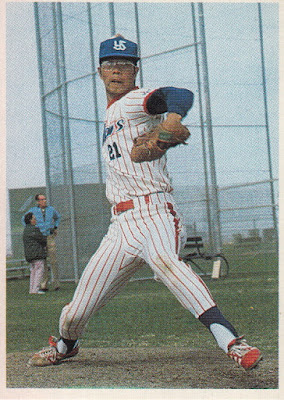