Card Of The Week December 10 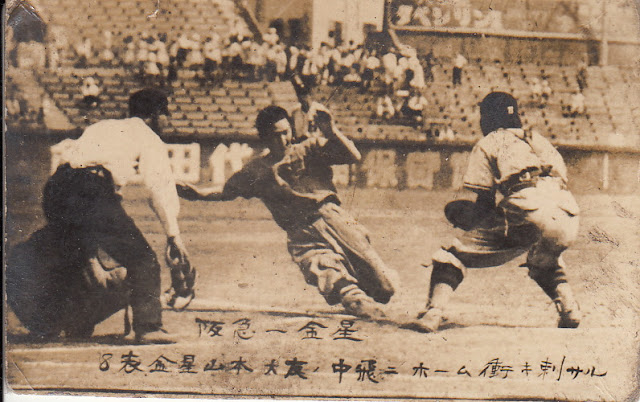 I recently picked up this bromide card from a seller on Ebay.  It's a great action shot - I just wish I could figure out who's in the photo.

The seller identified it as "1950' Vintage Japanese Baseball Photo Card 'YAMAMOTO & OHTOMO" so I started researching based on those names.  There's only two "Ohtomo's" to play professionally in Japan in the 40's and 50's - Kazuaki Ohtomo who played between 1936 and 1948 and Takumi Ohtomo who played between 1949 and 1960.  Both were pitchers so you'd think they'd be the baserunner then.  But I haven't found a catcher named Yamamoto during this time period.  From the fielder in the background I'm guessing that the catcher played for Hankyu as the uniforms are consistent with what the team wore between 1945 and 1949.  There's no Yamamoto who played for Hankyu during that time period. I haven't identified the uniform worn by the base runner.  It COULD be the Daiei Stars uniform from 1949 but neither Ohtomo played for that team (although Kazuaki had played for that team the previous year when it was the Kinsei Stars).

It's also entirely possible that this is from a college game and not a professional game at all.  Which means I have even less chance of figuring it out.

Obviously the fact that I can't read Japanese is hampering me here.  I can see the kanji for both "Yamamoto" and "Ohtomo" in the second line of text.  The first two characters on the first line look kind of like the kanji used for "Hankyu" (which isn't necessarily the kanji that says Hankyu) but they might not be.

I'd appreciate any help anyone can give me on this one.

UPDATE - Got an email from Jay Shelton who passed on a translation for the card from Jeff Alcorn, one of the "pioneers" of the Japanese baseball card hobby.  Jeff says that the card literally says something like:

Jeff goes on to add:  "So basically it is Hankyu vs. Kinsei, Hideo Yamamoto & Kazuaki Otomo scored for Kinsei after a hit to center field, 2 runs home. I don't think that the Braves' catcher is named, but the writing at the end of the sentence is very hard, however, it does not resemble the name of either of the Braves' catchers. Hideo Yamamoto's last year was with the Kinsei Stars in 1947, so I think that dates the card."

So I got off track figuring that one of the names was the Hankyu catcher.  I should have guessed that the baserunner's team was Kinsei and I'm not sure why I didn't investigate that further.  Of course there's still the question of which Kinsei Stars player is the baserunner - Ohtomo or Yamamoto.  I'd like to believe it's Ohtomo because he's a little more interesting of a player - he played in the first ever professional game in Japanese history on April 6th, 1936 and had the first ever stolen base.  If he's still alive (his Japanese Wikipedia page does not have a date of death for him), he's 101 years old now.

So thanks to Jay and Jeff for translating this for me!
Posted by NPB Card Guy at 2:48 PM