Card Of The Week December 24th

Busy weekend so I've got to do this fast.  This is an uncataloged bromide card of Tsuguhiro Hattori of the Dragons (or at the time of the photo Chubu Nippon).  Hattori was the first Dragons pitcher to reach 100 wins and his uniform number (#10) was retired by the team,  His career lasted from 1939 to 1958 although he missed several seasons due to the war.

The uniform he's wearing was apparently used by the team in 1946 and 1947 although the team only went by the name "Chubu Nippon" in 1946. 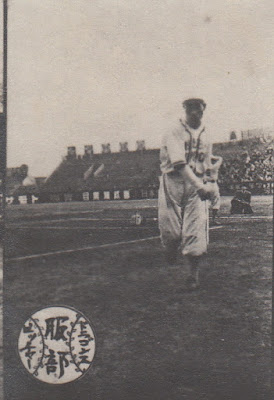 Very cool bromide! Is it halftime printed or silver bromide? I have a big project this spring where I am going to catalogue and make sets out of the hundreds of uncatalogued bromides I have stocked up. I have dozens of sets ID’d already, but there are dozens more that need documentation. So many bromides were printed in the 1940s it’s insane.

If it looks like a real photograph, it’s a silver bromide. If there are tiny print dots, it is halftime printed.

Looks like a real photograph so I guess it's a silver bromide.