Card Of The Week December 31

I got a little surprise the other day in the mail.  I had picked up a couple bromides from the 1940's recently on Ebay because they featured players wearing the uniform of a team called "Gold Star".  "Gold Star" was a team that started up in 1946 and became the Kinsei Stars in 1947 and then the Daiei Stars in 1949.  They would eventually merge with the Mainichi Orions to become the team that is now the Chiba Lotte Marines.  Even though the seller had identified the players, I really wasn't paying too much attention until I went to enter the cards in my database and realized that one of the players was Hall Of Famer Michio Nishizawa.

Michio Nishizawa is best known as a pitcher, batter and manager for the Chunichi Dragons.  He joined the Dragons as a pitcher in 1937 at the age of 15 which made him the youngest player ever in professional baseball in Japan.  He had a somewhat mixed career as pitcher over the next seven seasons, going 55-57 overall although he had a couple bright spots - he went 20-9 in 1940 and threw a no-hitter against Hankyu in 1942.  He was conscripted into the Army following the 1943 season and apparently injured his shoulder.  When he returned to the Dragons in 1946 he returned to the mound but pitched relatively poorly - going 5-8 with a 4.68 ERA.  He was never a big strikeout pitcher but he only struck out 22 batters in 121 innings while giving up 90 walks.  His friend Michinori Tsubochi (Japanese Wikipedia describes him as a "former colleague" but I can't figure out where they might have played together before) was the player-manager of Gold Star and Nishizawa somehow got himself transferred to that team in the middle of the 1946 season.  Tsubochi moved Nishizawa off the mound to first base - Nishizawa would only pitch in two more games after leaving the Dragons.

Nishizawa remained with Tsubochi and the now Kinsei Stars for two more seasons after 1946.  He had decent numbers with the bat but it wasn't until he returned to the Dragons in 1949 (taking Tsubochi with him or maybe it was the other way around) that he really took off.  He hit .309 with 37 home runs and 114 RBIs in the Japan Baseball League's final season.  He followed that up by hitting .311 with 46 home runs and 135 RBIs in the inaugural season for the Central League.  His power numbers dropped off after that but he still hit for average, leading the CL in batting in 1952 with a .353 average.  He helped the Dragons to their first (of only two) Nippon Series Championships in 1954.  He retired after the 1958 season and managed the Dragons for four seasons from 1964 to 1967.  He appears to have stepped down as manager before the 1968 season due to poor health

He was elected to the Hall Of Fame in 1977 and his uniform number 15 (which he wore after he returned to Chunichi in 1949) was retired by the team.  Tragically his poor health caught up to him in 1977 - he had suffered a cerebral hemorrhage in 1971 that he left him confined to a wheelchair and he passed away in December of 1977 due to heart failure.  He was only 56 years old.

Here's the card of him with Gold Star.  The card is uncatalogued so I don't know much about it.  Since he only played in 34 games with the team in 1946 it must have come out either late in the year or in early 1947. 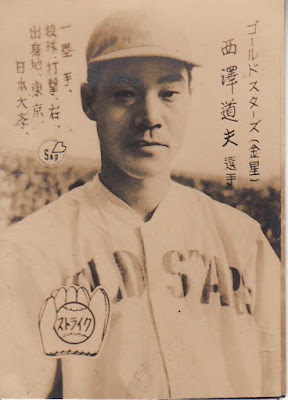 Found your blog due to Tom's (Waiting 'Til Next Year) card of the year post. Very cool site, and this is a superb card! I may have to try and add some Japanese cards to my collection soon. Looking forward to seeing more posts from you in my feed.

Thanks for the kind words