Over the years Calbee has issued a variety of items that were available when collectors redeemed "Lucky Cards" that were randomly placed in packs.  In Calbee's very first year (1973) collectors could receive large postcard sized cards as premiums.  These cards were blank backed and are very rare.  I was lucky enough to pick up a couple of them off Ebay recently.

The first card shows a trio of great pitchers - Tsuneo Horiuchi of the Giants, Masaji Hiramatsu of the Whales and Yutaka Enatsu of the Tigers.  Horiuchi and Hiramatsu are both Hall Of Famers and Enatsu would be as well if it was not for his drug bust in the 1990's.  I think this photo was taken at Koshien Stadium at the third All Star game in 1972 but I'm not really sure (the Whales hat has the logo used up until that season). 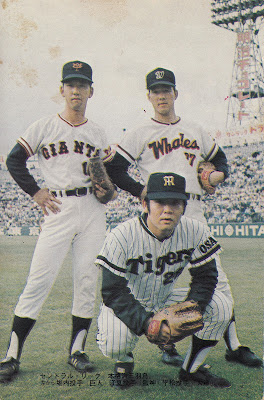 The other card shows Sadaharu Oh swinging a sword at a baseball: 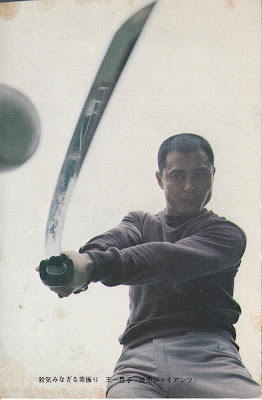 I can't find a lot about these cards anywhere.  Neither SCM or the 1973 Calbee book mention them at all.  The Calbee collector website has a brief couple of comments about them.  Engel lists about 20 of them but his list does not include the Horiuchi/Hiramatsu/Enatsu card.  I feel very fortunate to have been able to get these.
Posted by NPB Card Guy at 10:56 PM

Very cool. I was looking in Engel and he had a picture of Oh rowing a boat in front of the Genbaku Dome as the set header. That sword card is really cool and it is awesome you discovered a new card in the checklist!

Sadaharu Oh and a samurai sword? Seriously... does it get any cooler than this?

Wow, that is an amazing find, I love that Oh one especially!