Card Of The Week February 25

Shohei Ohtani made his spring training debut with the Angels yesterday.  It wasn't a great outing - he gave up two runs on two hits and one walk while striking out two in 1 1/3 innings pitched - 31 pitches total.  One of the runs was unearned but the other one scored on a long home run by Keon Baxter.  It'll be interesting to see how he does in his next outing - probably next weekend.  He's expected to make his batting debut sometime this week.

I'd been seeing this oddball Ohtani card on Ebay for a little while and I finally picked one up a few weeks back.  Here's the front and back of the card: 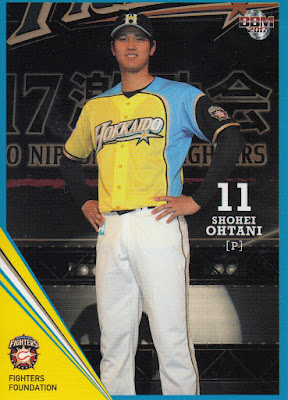 This is a card issued by BBM that apparently ties into a charity called the Fighters Foundation which I assume is an charity with ties to the team.  I did some searching on the Fighters' website but I didn't find anything relating to the card specifically.   I did find an item from December of 2016 that the photo on the back is from - it looks like Ohtani along with several other players including Sho Nakata and manager Hideki Kuriyama appeared on Hokkaido Cultural Broadcasting (UHB) TV to read storybooks.  I suspect the text on the back has something to do with this since I see "UHB" in the middle of it.  The uniform was worn by the Fighters in early 2017 so the card must have been released after that.  The design of the card is very similar to BBM's Fighters team set from last year.  There's no card number so I don't know if there are any other cards like it.
Posted by NPB Card Guy at 5:16 PM