A Saturday Afternoon In Scottsdale 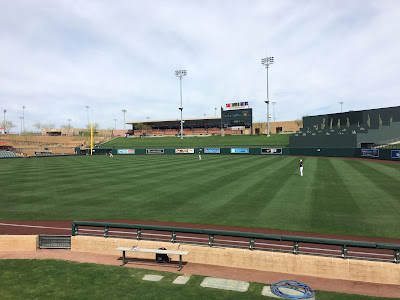 Last Saturday my wife and I escaped the frigid Mid-Atlantic for an extended weekend in Arizona.  Our first stop straight from the airport was to Salt River Fields At Talking Stick in Scottsdale, the spring training home of the Rockies and Diamondbacks and, for two weeks this spring, the Hokkaido Nippon-Ham Fighters.  The Fighters were playing a game against the KBO's KT Wiz that afternoon.

We arrived at the game during the bottom of the first and sat behind Deanna Rubin and Dani who were in the first row behind the Fighters' dugout.  We spent the game talking with them and just enjoying being out in nice weather.

The game itself was pretty uneventful.  The Fighters went up 1-0 in the bottom of the third on a home run from Kenshi Sugiya (who spent a couple weeks this winter with the Brisbane Bandits who won the Australian Baseball League championship over the weekend).  The Wiz tied it up in the sixth but the Fighters rallied to score three runs in the bottom of the eighth and went on to win the game 4-1.  (It was kind of odd that they played the bottom of the ninth despite the Fighters - who were the home team - leading.)  Justin of Charm City Autographs (who had intended to be at the game originally but had to work) told me that he was surprised the Wiz had even tied the Fighters since the Wiz hadn't sent any regulars up from their training camp in Tucson.

I was kind of disappointed after the game that there really wasn't any opportunity to get any autographs from the players.  It looked like Yuki Saitoh was the only one who stopped to sign for anyone in the stands.  I was also disappointed that I didn't see any media, scouts or front office people that I had brought cards for.  Saturday was the only day that we were going to spend at the Fighters' camp - we went to a bunch of National Parks, Monuments and Forests during the other two days we were in Arizona - so all the cards I brought were for naught.

Here's some of the pictures that I took:


The Fighters' YouTube channel had highlights for the game:

There's more pictures and a partial box score for the game at the Fighters' website.  Check out Dani and Deanna's Twitter feeds for more photos from the game and the rest of training camp - they were both there for a couple days.  An outfit called Phrake Photography posted a bunch of pictures from the game on Facebook and published a link on the NPB Reddit page.
Posted by NPB Card Guy at 8:57 PM