In honor of Labor Day here in the United States I thought I'd do a quick post on a set that was issued by the Japan Professional Baseball Players Association (JPBPA) back in 2003.  The base set contained cards of 60 players.  The image of the player was a drawing or painting and no team logos were shown.  The player's team was also not identified.  Most of the major NPB stars of the era were included in the set - Koji Uehara, Kazuhiro Kiyohara, Tadahito Iguchi, Hiroki Kuroda, Yoshinobu Takahashi, Hisashi Iwakuma, Tomoaki Kanemoto, Kazuo Matsui, Nobuhiko Matsunaka, Daisuke Matsuzaka and Takuro Ishii to name a few.  Each of the 60 cards has a parallel version - the "special" version - and autographed versions of the "special" version were available.

Here are the cards that I got: 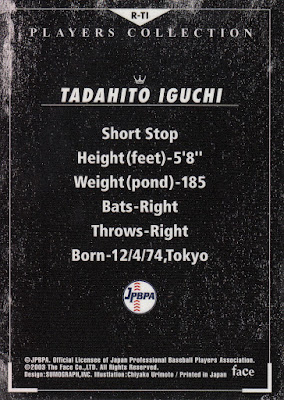 Here's photos of the front and back of the box that the cards came in: 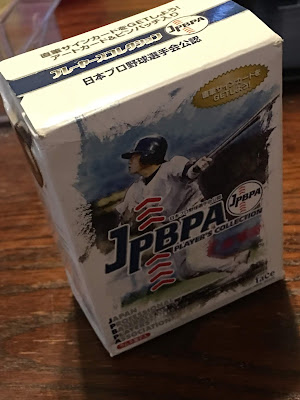 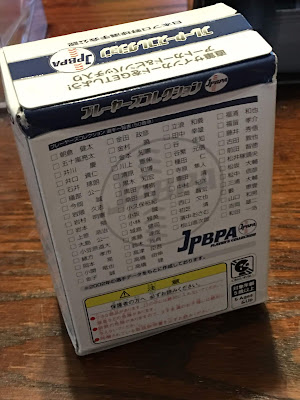 And finally here's the player pin I got in the box: 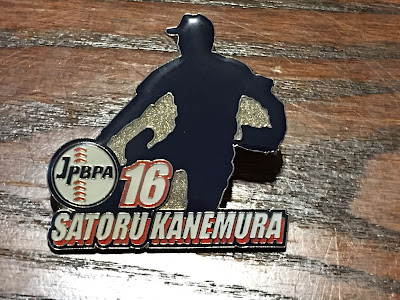 It was kind of an odd set and the JPBPA never issued another one.  I'm not a big fan of sets that don't have the team logos (I never buy anything from Panini) so this was never a set i was real interested in completing.  Ryan on the other hand has the complete base set and posted all the cards a few years back.
Posted by NPB Card Guy at 8:28 PM

They look like computer rendered drawings based off of a photo as you can see the background has the same outline on all the cards. It would really surprise me if they had actual drawings given how deep they are into computer graphic art. Neat set and I had never heard of it before.