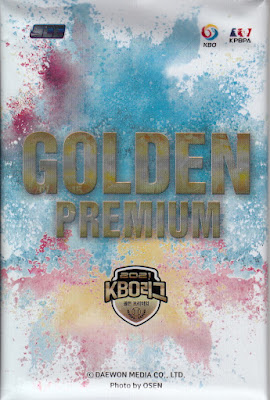 SCC issued two sets for the Korean Baseball Organization last year - a very odd set called "Rainbow" in June that seemed to be made up entirely of parallel cards and the "Golden Premium" set in November that was more like the previous KBO sets that SCC has issued over the past couple years.  Dan Skrezyna of Korean Cardboard was kind enough to pick me up a set and I received it in the mail last week.

I'm not going to comment too much on who's in the set - I don't claim to know much about who the best players in the KBO are so I don't know if there's some big name that's missing from this set.  I will mention that, as usual, there are no foreign players in the set.  I also want to mention that former MLB player Choo Shin-Soo is in this set (as well as the "Rainbow" set).  As this is Choo's first season in KBO these are his first KBO cards.

Here's some example cards.  First up are three "rare" cards.  The "rare" cards are the only ones that do not have the player's English name on the front:

I'm not positive, but I think all the "holo" cards are pitchers:

Similarly, the "etching" cards all appear to be position players.  With the other cards have a glossy feel to them, these have kind of a rough feel.

The backs of the cards look the same regardless of which type they are.  One oddity - the photo on the back may or may not be the same as the one on the front.  I'm guessing that it's about half and half although I didn't count them up to be sure.

If recall, I mentioned earlier that 190 of the 212 cards were for players on the 10 KBO teams.  So what are the other 22 cards?  They are for the Korean National Team from last summer's Tokyo Olympics (which had the baseball competition played in Fukushima and Yokohama, not Tokyo).  I was excited to see this subset included in this set as it is (1) the first cards ever of a Korean Olympic baseball team, (2) only the second time a Korean company had done cards of a Korean National team (after the 1999 Teleca Premium set) and (3) the first time the Korean National Team had a significant representation on baseball cards since the 2009 World Baseball Classic (there were only five cards total for them in the cards for the  2013 and 2017 WBCs).

The one odd thing about the National Team cards is the numbering.  SCC did not create new card numbers for these cards - they use the same numbers as the corresponding player had in the rest of the set.  For example, Lee Jung-Hoo's Olympic team card is numbered SCC-21/H18, same as his card with the Kiwoom Heroes.  So technically all the Olympic team cards are parallels although I don't think they're any less common that the other 190 cards in the base set.  Here's the front and back of Lee's National Team card: 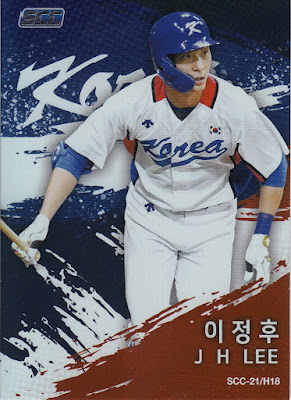 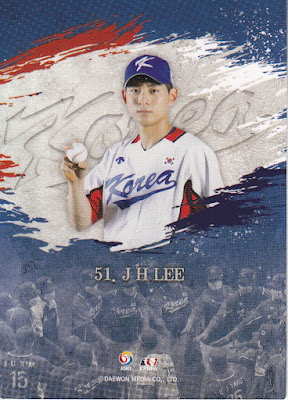 Dan's got scans of all the base set cards up over at the Trading Card Database.

Thanks for getting me the set, Dan!

Love the etching cards. Holo cards are pretty too. Didn't realize they were position / pitcher specific.