Card Of The Week January 16th

I regularly read a Japanese blog about Calbee cards called "Calbee Card Institute" (or at least that's what Google translate calls it).  A couple weeks back it had a post about a 1999 Star insert of Tsuyoshi Shinjyo.  The interesting thing about this card was that it features a picture of Shinjyo pitching!  Apparently Katsuya Nomura had toyed with the idea of making Shinjyo a pitcher when he took over as manager of the Tigers during the 1998-99 offseason.  It didn't last too long - it looks like Shinjyo only made two appearances on the mound during spring training in 1999 before hurting his knee - but long enough for it to be commemorated on a baseball card.

Actually, it was commemorated on at least two baseball cards.  I went looking for the Calbee card on Yahoo! Japan Auctions but it was more expensive than what I wanted to pay.  During the search, though, I came across a BBM card showing him pitching that was much cheaper.  It's a promo card for the 1999 BBM Tigers set.  I don't know if his regular card in the set shows him as a pitcher or not.  Here's the front and back of it (my scanner cut off the top border on the front for some reason): 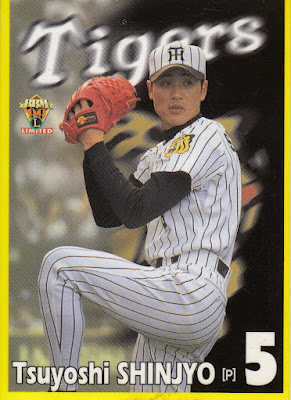 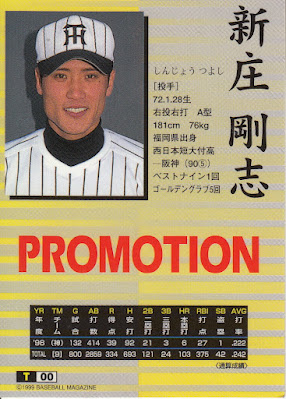