So the other day I got some information from Scott Kaneko regarding that odd Cecil Fielder card from the 1989 Calbee set.  Seems that according to the 1989 Calbee checklist included in Sports Card Magazine issue #100, card #107 has both an error and corrected version.  I'm assuming that the card I have is the error version and the one with the stats on back is the corrected version.

If you take a look at the whole checklist (which Scott scanned for me), you'll see that there's a couple more cards with both error and corrected versions: 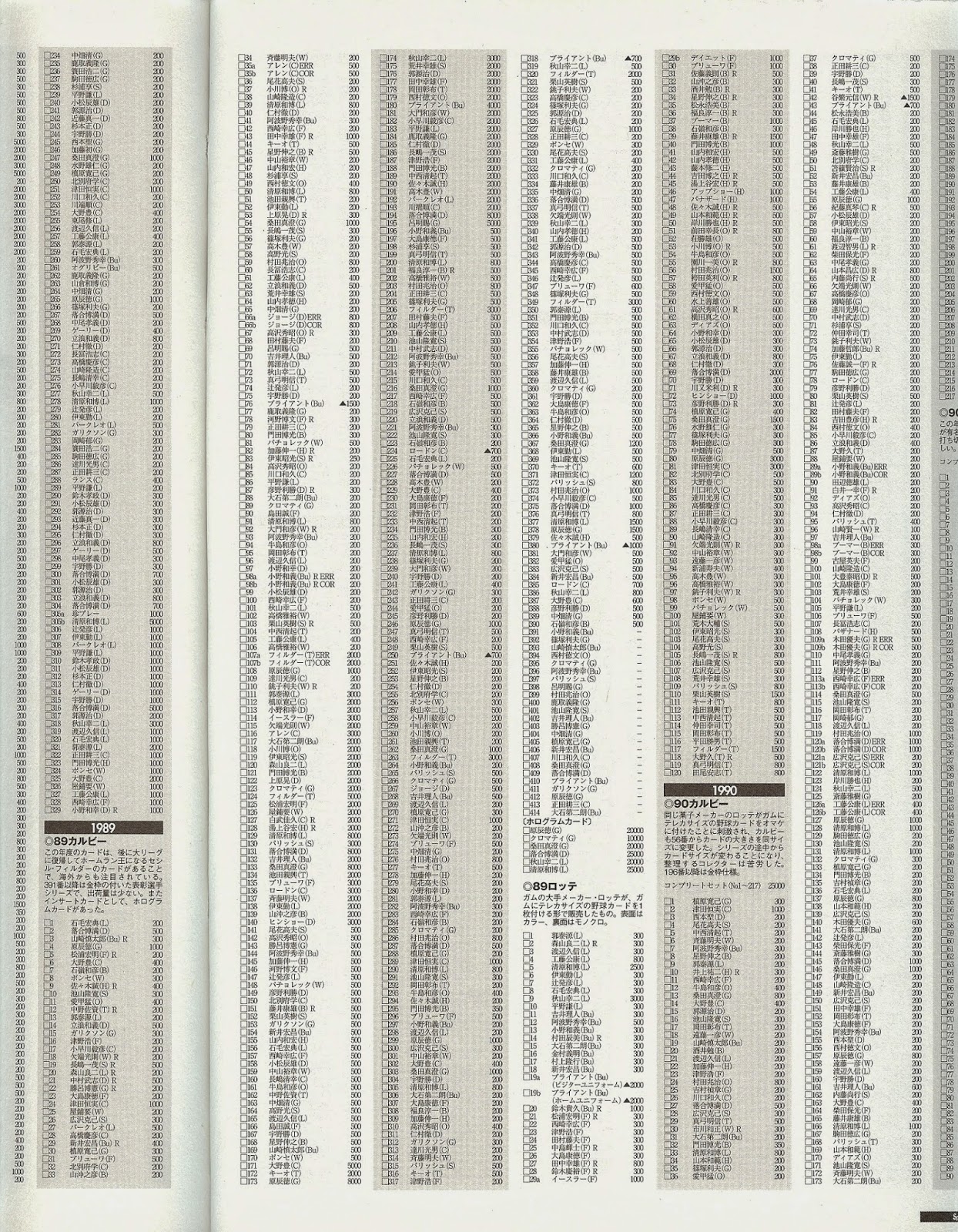 Cards #35 and #66 were for Rod Allen of the Carp and George Hinshaw of the Dragons respectively. Both of them, like Fielder, were in their first years in Japan so I kind of wonder if Calbee had some issue getting their stats before the cards went to press.

Card #98 was for Kazuyoshi Ono of the Buffaloes.  Now when I saw this Monday morning when I got Scott's email, I had remembered that I had a 1989 Calbee card of Ono that was not labelled correctly.  So I kind of guessed that that was the error card.  But when I finally got around to actually looking at my cards, I discovered something else instead.

I had correctly remembered that I had a card of Kazuyoshi Ono that was not labelled correctly, but it was not card #98, it was card #297.  The back of this card identifies Ono as Kazuyuki Ono of the Dragons.  Here's the front and back of the card: 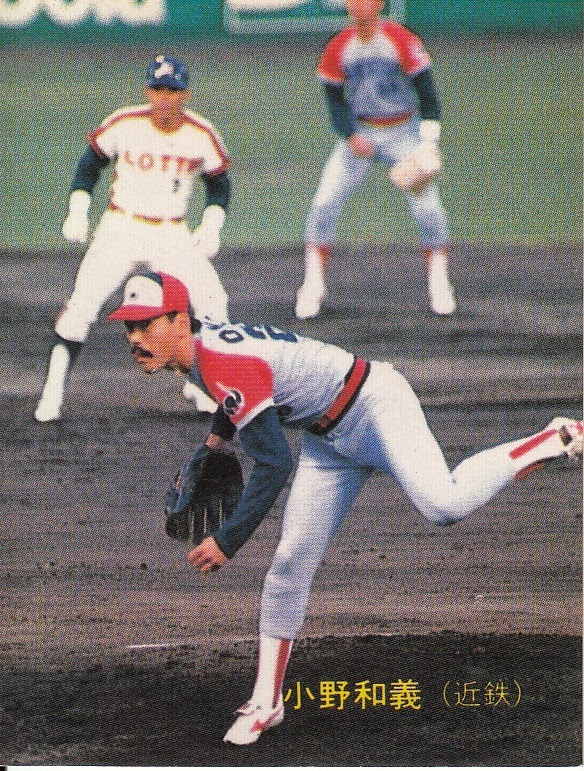 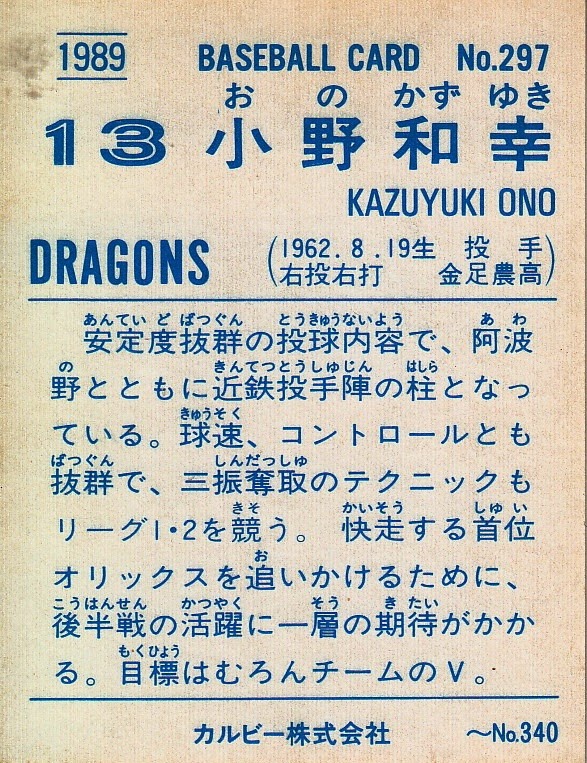 You can see that beyond the team and the uniform number being wrong, the kanji doesn't match between the front of the card and the back of the card.  The checklist does not list this as an error card, or at least does not indicate that it was ever corrected. 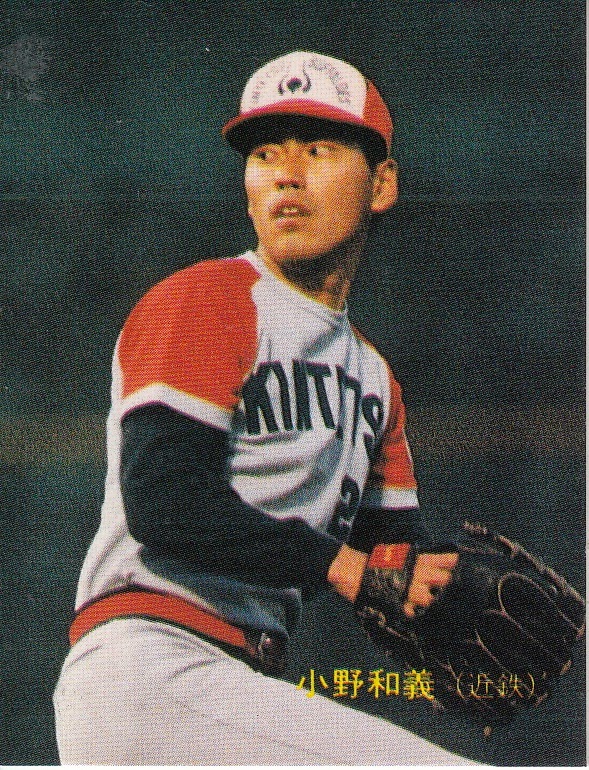 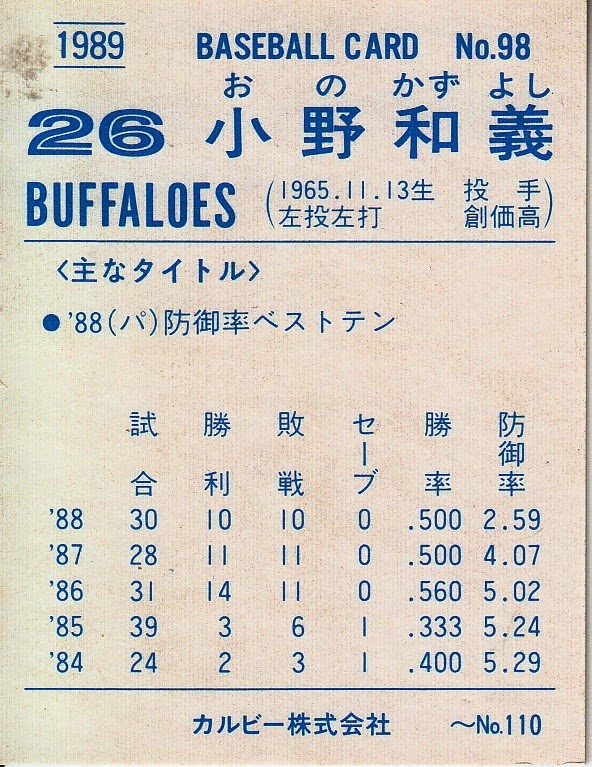 I do not know if this is the error card or the corrected card.  I wonder if card #297 was not the only one where Calbee mixed up the two players (I don't think they were related).

One more note - you might notice on the checklist that cards #391-#414 don't have a value associated with them.  Sean had mentioned a few months ago that these are gold border cards that are almost impossible to find.  I guess they are so rare that SCM won't venture a value.  Engel has all of these listed at at least $100 each with several stars (Warren Cromartie, Hiromitsu Ochiai, Choji Murata and Tatsunori Hara among others) going for $200-$300.
Posted by NPB Card Guy at 9:00 PM

Glad to see the mystery of the Fielder card was solved!

Also I`m interested to see that Sports Card Magazine now catalogues cards from as far back as 1989. I haven`t bought an issue in years, but I remember they used to only go as far back as 1991 which I found kind of annoying.

And also very interesting about that 1989 rare block not even having values listed for the cards!