Last week was an auspicious week for two former Fukuoka Daiei/Softbank Hawk pitchers.  On Wednesday, Tsuyoshi Wada of the Chicago Cubs made his first major league appearance.  Wada had left the Hawks and Japan following the 2011 season and signed with the Baltimore Orioles, but Tommy John surgery needed during his first spring with the O's effectively prevented him from pitching in the majors for them during his two year contract.  He joined the Cubs this spring and had been pitching at their AAA team in Iowa until he was called up for the spot start on Wednesday in the second game of a day/night double header against the Reds.  He went five innings and gave up five hits, one walk and one unearned run while striking out three.

On Saturday night in Tokyo, Toshiya Sugiuchi of the Yomiuri Giants became the 22nd player in Japanese baseball history to record 2000 strikeouts.  He was also the fastest pitcher to reach the milestone, getting there in 1930 2/3 innings.  Sugiuchi had also departed the Hawks after the 2011 season, but he stayed in Japan and signed with the Giants.  (Sugiuchi's 2011-12 seasons paralleled Kimiyasu Kudoh's 1999-2000 seasons - both players won a championship with the Hawks in the first of the two seasons, then left the Hawks for the Giants and won a championship with Yomiuri in the second season).

Here's a card of the two of them with Hayato Terahara back when the three of them were young pitchers with the Hawks (2003 BBM Hawks #097): 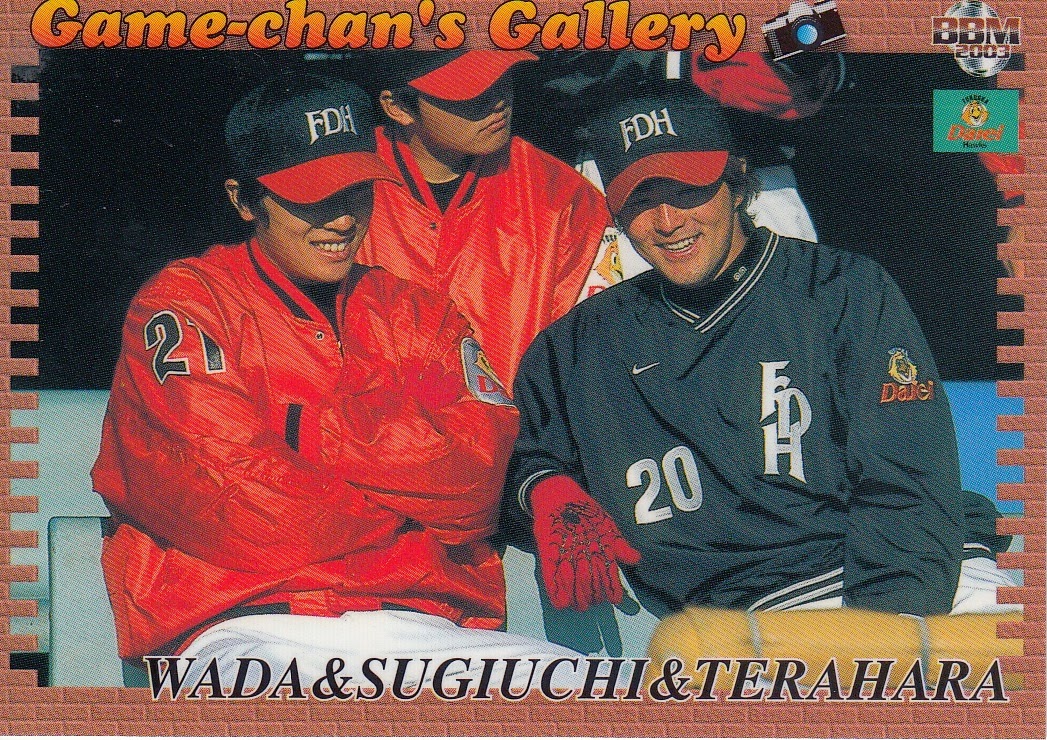 Wada's on the left (#21), Sugiuchi is in back and Terahara is on the right (#20).  It's kind of funny how things work out - Terahara was actually the one who was hyped as the big prospect back in the 2002-03 time frame but he's mostly had a mediocre career, especially compared to the other two, who have two Pacific League MVPs and a Sawamura award between them.
Posted by NPB Card Guy at 9:10 PM

Oh that brings back painful memories. I was living in Fukuoka in 2011 and was so happy when they won the championship. Then Wada and Sugiuchi (and Kawasaki) jumped ship....it sucked so much.

Actually I didn`t mind losing Wada and Kawasaki to the majors so much, but somehow Sugiuchi signing with the Giants felt like a much bigger betrayal!

Its a good point about Terahara too. I remember back in 2002 trying to put together a set of BBM and Terahara being the most valuable card in the regular set according to Sports Card magazine. That seems to always happen with much hyped rookie pitchers, they almost never pan out.