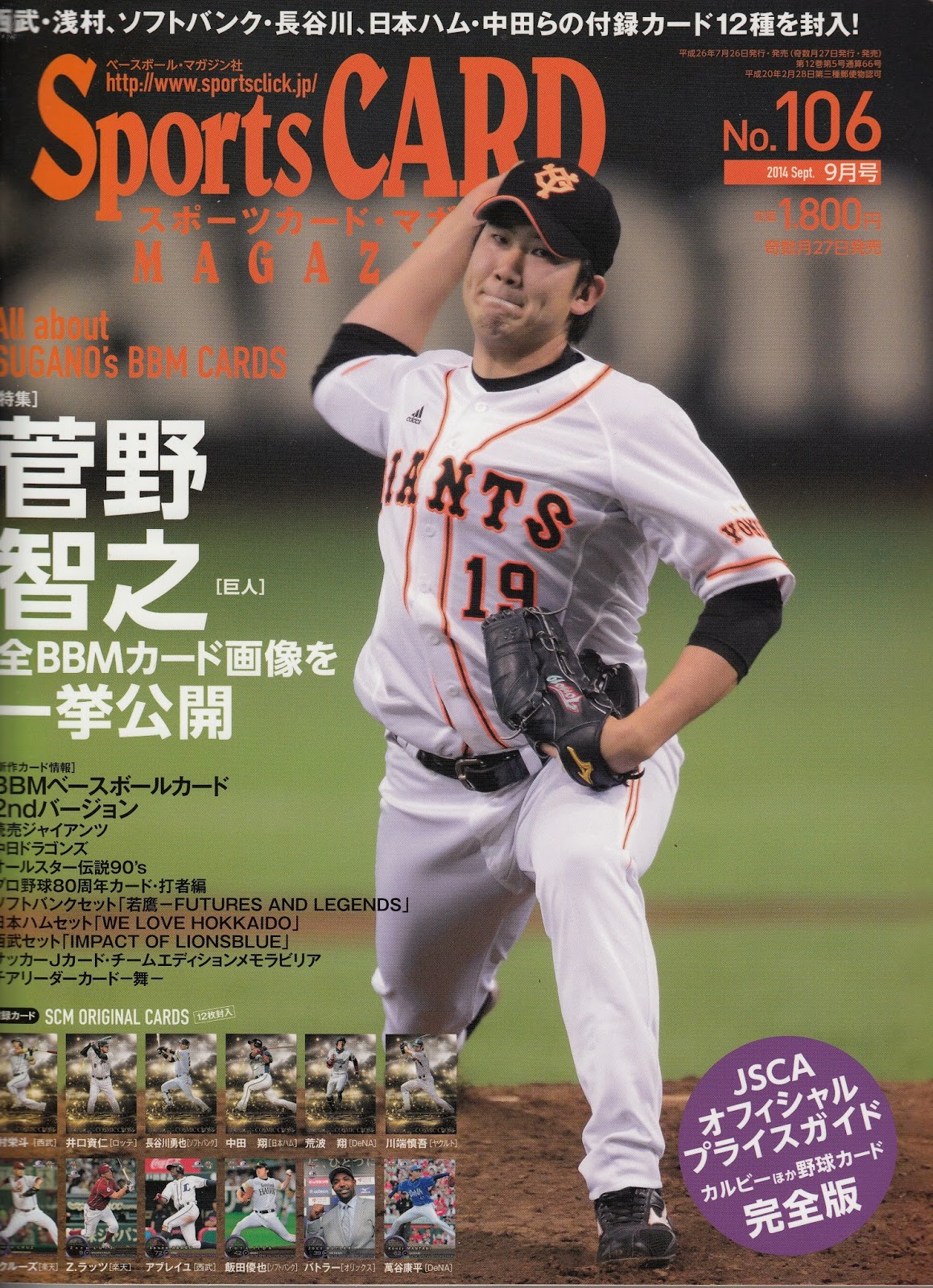 The latest issue of Sports Card Magazine (#106) hit the newsstands in Japan last Saturday.  It's the usual mixed bag of articles and ads that are of limited appeal to non-Japanese readers.  The issue has a full color listing of all the BBM cards for Tomoyuki Sugano (around 54 in only a year and a half) along with nice full color ads for a bunch of new BBM releases, including 2nd Version, Giants, Dragons, 90's All Star Memories, 80th Anniversary Batters Edition, and the new team box sets for the Fighters, Lions, Tigers, and Hawks (2 different ones).  There's also ads for the new Dancing Heroine set (Mai), a box set for the Hawks cheerleaders (the Honeys) called "Honeys Flash!!" and a J-League set.  There's an actual article on the 80th Anniversary Batters Edition set in the "newsprint" section of the magazine (so it's in black and white).  There are checklists for a bunch of the new releases, including the 2nd Version set which will be out next week.  One thing I learned from the magazine is that the "Ceremonial First Pitch" cards in the 2nd Version set will be numbered separately from the rest of the set.  I'm assuming that they are still considered part of the base set but I don't know that for sure.

SCM rotates the checklist/price guides that appear in every issue.  This month's issue has non-BBM baseball issues - Calbees from 1973 on (with the exception of the 1977-79 issues) as well as Lotte, Tomy, Kanebo, Future Bee, Broccoli, Upper Deck and Epoch/OB Club as well as a couple issues I don't recognize off hand (someone did a Randy Bass set in 2000?).

Of course, the best part of SCM is the baseball cards.  Once again there are twelve.  Six of them are the latest Cosmic Cross cards.  The other six are all bonus cards for the 2nd Version set.  Three of them are late signing foreign players - Rhiner Cruz and Zach Lutz from the Eagles, and Joey Butler from the Buffaloes.  The others are (I think) former Ikusei players who made their ichi-gun teams this year - Abner Abreu of the Lions, Yuya Iida of the Hawks and Kohei Mantani of the Baystars.

I'm a little disappointed that they didn't have a card of Yulieski Gurriel but it's still pretty cool having bonus cards in the set.

UPDATE: YakyuBaka posted a list of all the player moves from the beginning of the season until today (the "Trade And New Contract" deadline).  The cut-off for BBM's 2nd Version set is usually around May 20.  The three new foreign players (Cruz, Lutz and Butler) all signed after that so none of them would have been expected to make 2nd Version.  Abreu's upgrade from ikusei status also came after that date but the other two players could have been included in the set (but weren't, not even in the 1st Version Update).

And looking at the ad in SCM for 2nd Version, I just now noticed that Yulieski Gourriel is included in the 1st Version update subset, so the deadline is more like June 2nd this year.
Posted by NPB Card Guy at 9:26 PM

How did you get this so fast?

Interesting that they're pulling First Pitch out as an insert. Hopefully it'll still be accessible enough to put my set together quickly.

I'm guessing the price guide is the same as issue 100 with just some updates. I've purchased the last two issues so I'm thinking I might go ahead and get this one as well. Having additional listed sets would make it worth buying. And getting to see the previews for the new sets.

Ordered from Amazon Japan on Saturday and got it Tuesday.

While First Pitch is numbered separately from the rest of the set, I don't think it's really an insert set. Or at least it's not a premium one. I think this is the same hairsplitting you and I get into with how to refer to the subsets/insert sets with Calbee. To me, only the Star cards are inserts despite the fact that all the subsets are numbered separately from the regular player cards.

The price guide does not appear to include any of the Front Runner sets. They do have the QCards from 1991 however.

hi there to store or you can buy the set in Japan?

Not quite sure what you're asking. As far as I know, the only stores you can buy the magazine in are in Japan. I ordered from Amazon Japan. In the past when I've done it, the total was roughly $30 including shipping. This time around I bought a couple mooks as well so the total was higher.

I would in tokyo next week.I wanted to know what stores I could buy sets of cards

I'd recommend Mint Ikebukuro, Quad Sports and Wrappers. But it depends on where you are and what you're looking for. There are a number of Mint stores in the Tokyo area.

You can check out the posts I did on the card shops I went to last year but for the best information I'd recommend reading Ryan's card shop posts. His are much more thorough and up to date than mine.

As I always tell Ryan, I'm jealous you're going to Japanese card shops. Good luck, have fun and let us know about your experiences.

kantou - I suggest going to Mint Ikebukuro or Coletre (also in Ikebukuro) for complete sets.

Mint Ikebukuro, Quad Sports, and Wrappers are all pretty good for single cards.

Any Japanese card shop should have the magazine which includes all the cards.

I live just in Ikebukuro.thanks for advises

magazine to have cards for university or high school prospect?

I don't know of any cards for high school prospects. BBM did sets for the Tokyo Big Six collegiate league from 2008 to 2013 but nothing for any other leagues.

waaaouh great I hope to buy a set I especially like the tokyo big 6 2010 with kagami from hosei or oishi from waseda which are always my favorite players !!!!

Several of the card stores around Tokyo still have the Big 6 box sets available at varying prices from various years. The Akihabara Mint (Yellow Submarine) location had a few on sale, but I don't remember what year they are/were.

If you just want singles of your favorite players it is cheaper to just get singles. Quad Sports in Takadanobaba or Mint in Ikebukuro would be your best bet.