When we last saw Shunsuke Watanabe, formerly of the Chiba Lotte Marines, he was in spring training with the Red Sox.  He ended up getting released by the Red Sox before the end of spring training but he landed a roster spot with the Lancaster Barnstormers of the independent Atlantic League.

Lancaster, PA, is only about an hour's drive for me from my home in Maryland, so I was determined to get up there for a game and see if I could see him.  A variety of issues, however, delayed me from getting there until the Sunday of last weekend.  But that turned out to actually be a great game to see him at.

Watanabe started the season working out of the Barnstormers bullpen but moved into the starting rotation in mid to late May.  I had originally planned on going to last Saturday night's game but after checking the box scores of the last week or so's games, I realized that Watanabe would be starting on Sunday so I changed my plans.

Watanabe is the not the only ex-NPB player on the Barnstormer's roster.  Former Yakult Swallow farmhand Yusuke Kajimoto is the starting second baseman for the team and former Carp Fred Lewis was the starting left fielder until he went down with an injury a little while back.

My first surprise was when I arrived at the ballpark and took a look at the starting lineup that was posted just inside the main gate - Lewis was back from his injury. 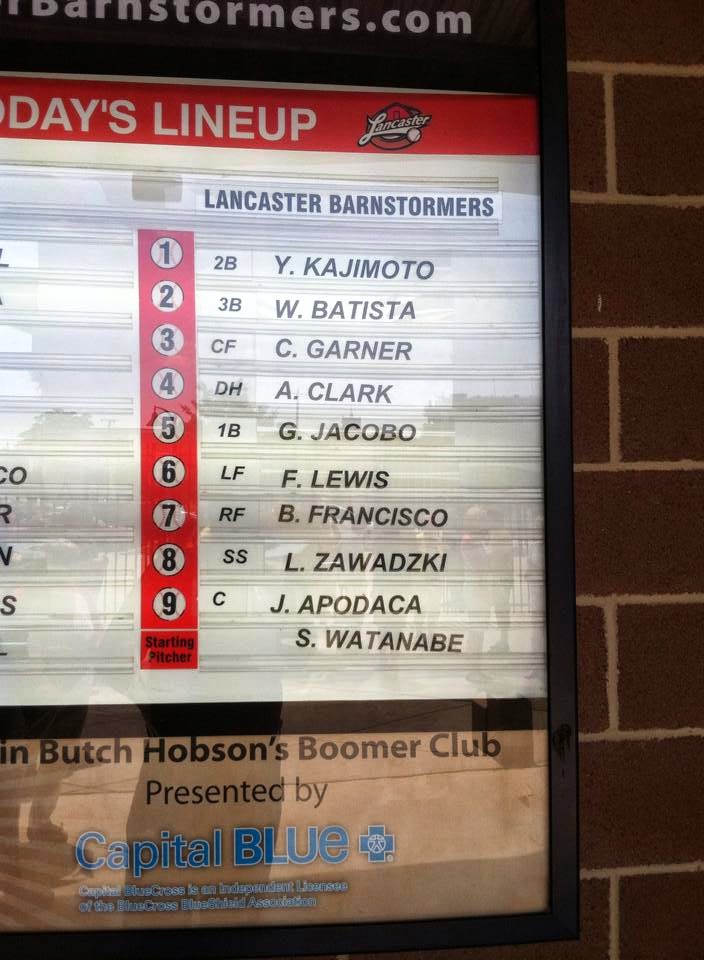 The Barnstormers bullpen is in the right field corner.  The chairs for the pitchers are level with the front row of the stands but the area where the pitchers warm up is next to an area where the stands rise up to become a party pavilion.  I was able to stand up there while Watanabe was warming up and take this sequence of pictures using my camera's rapid shot sequence feature (or whatever it's called): 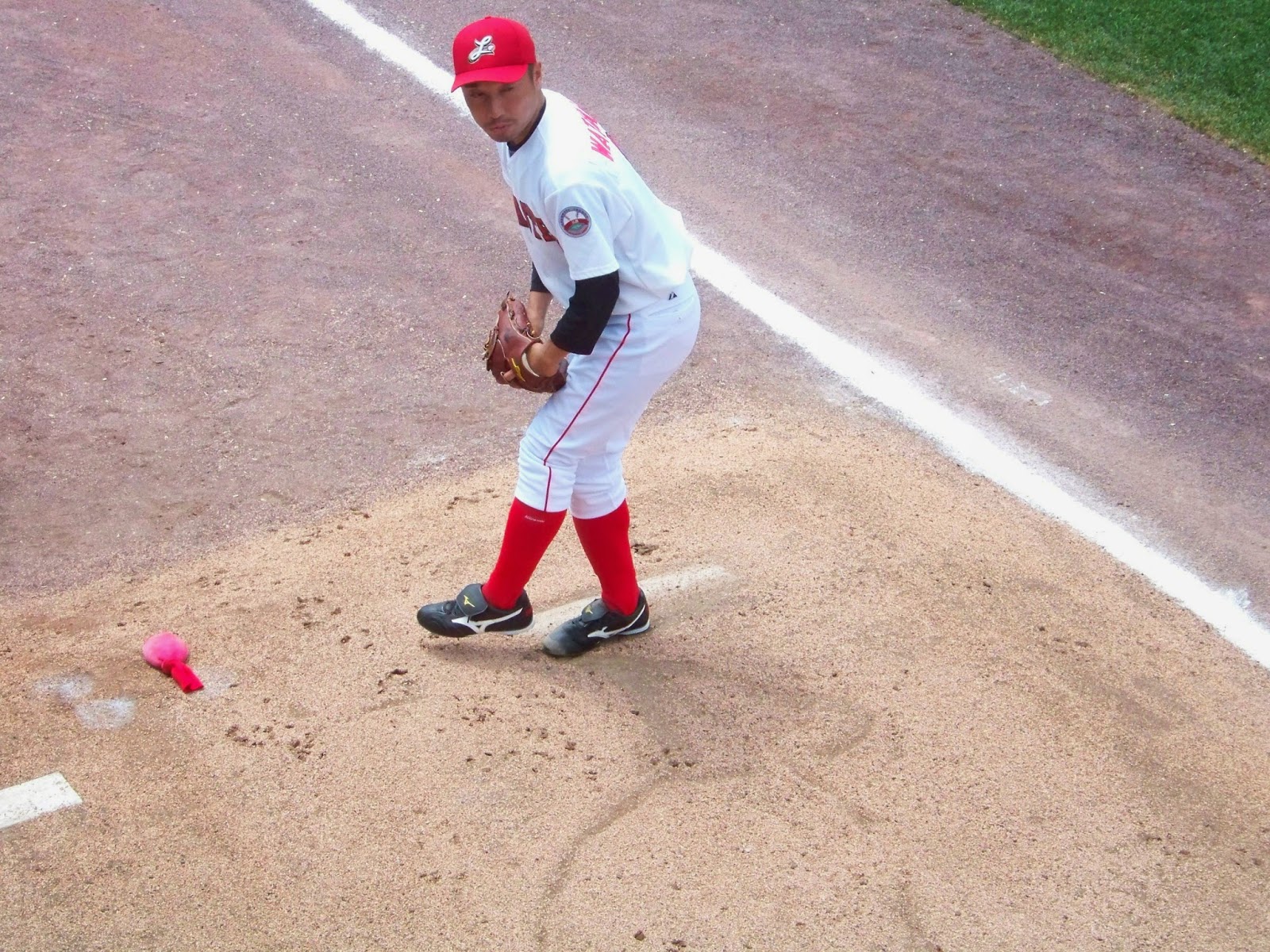 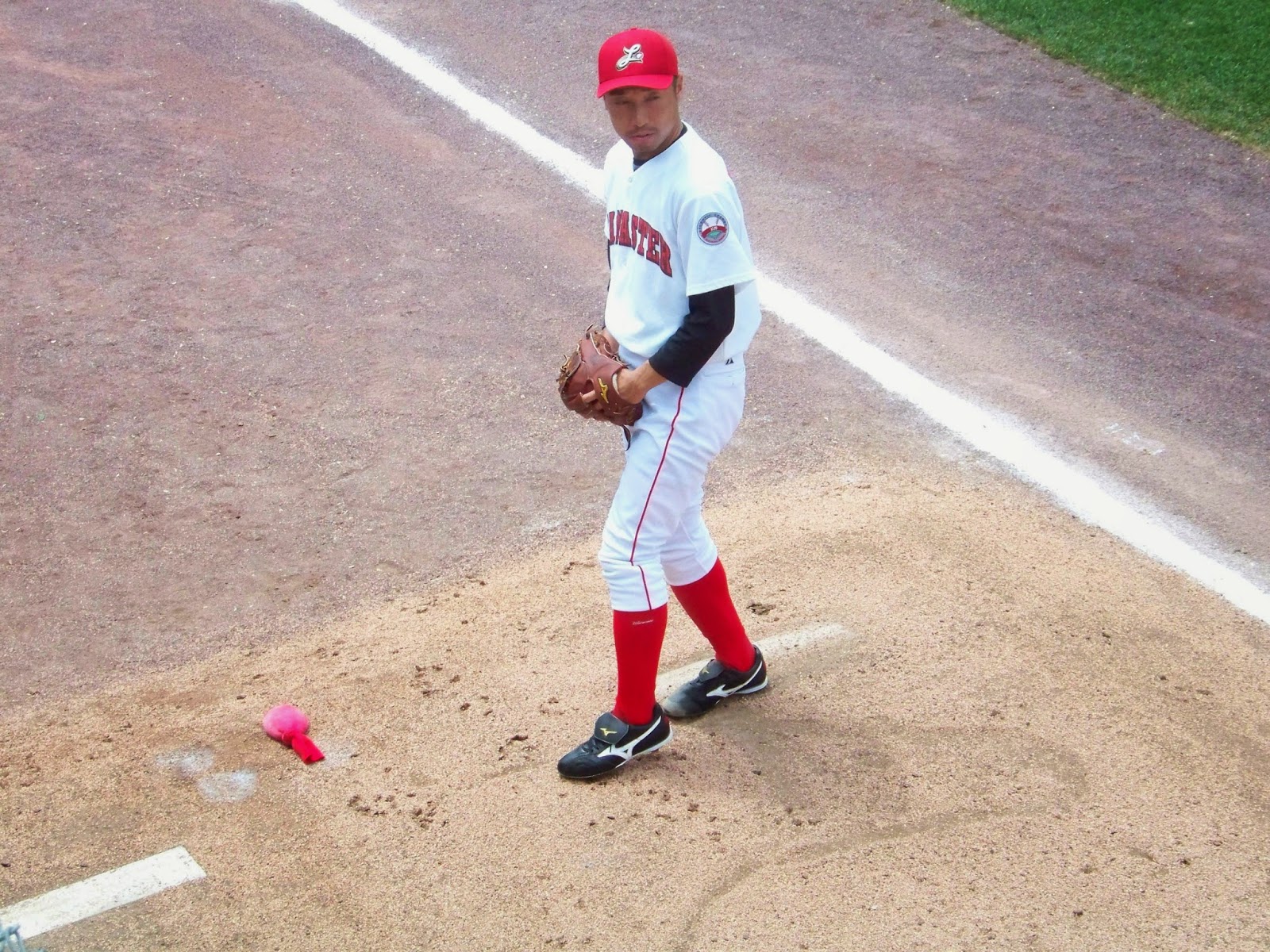 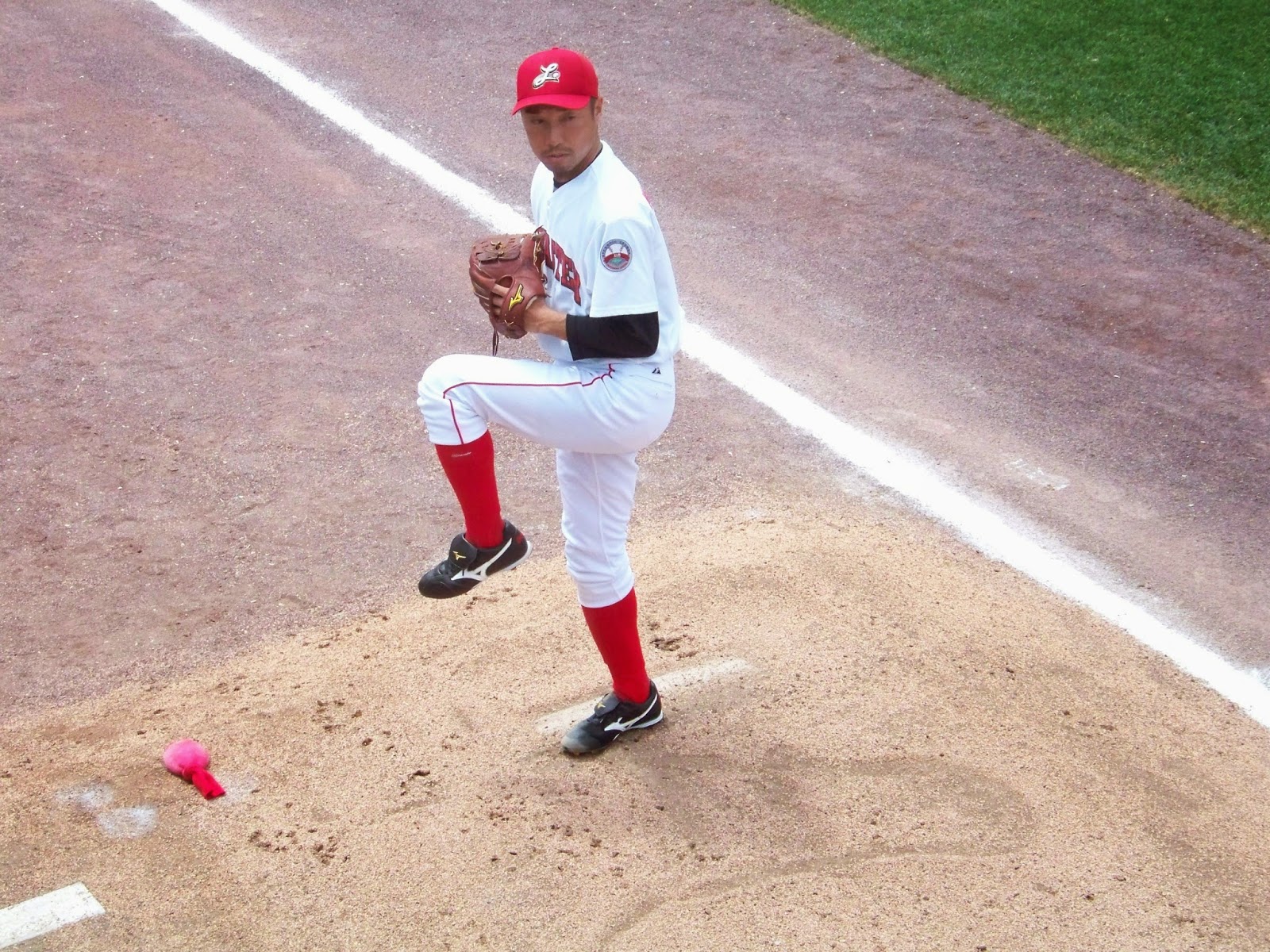 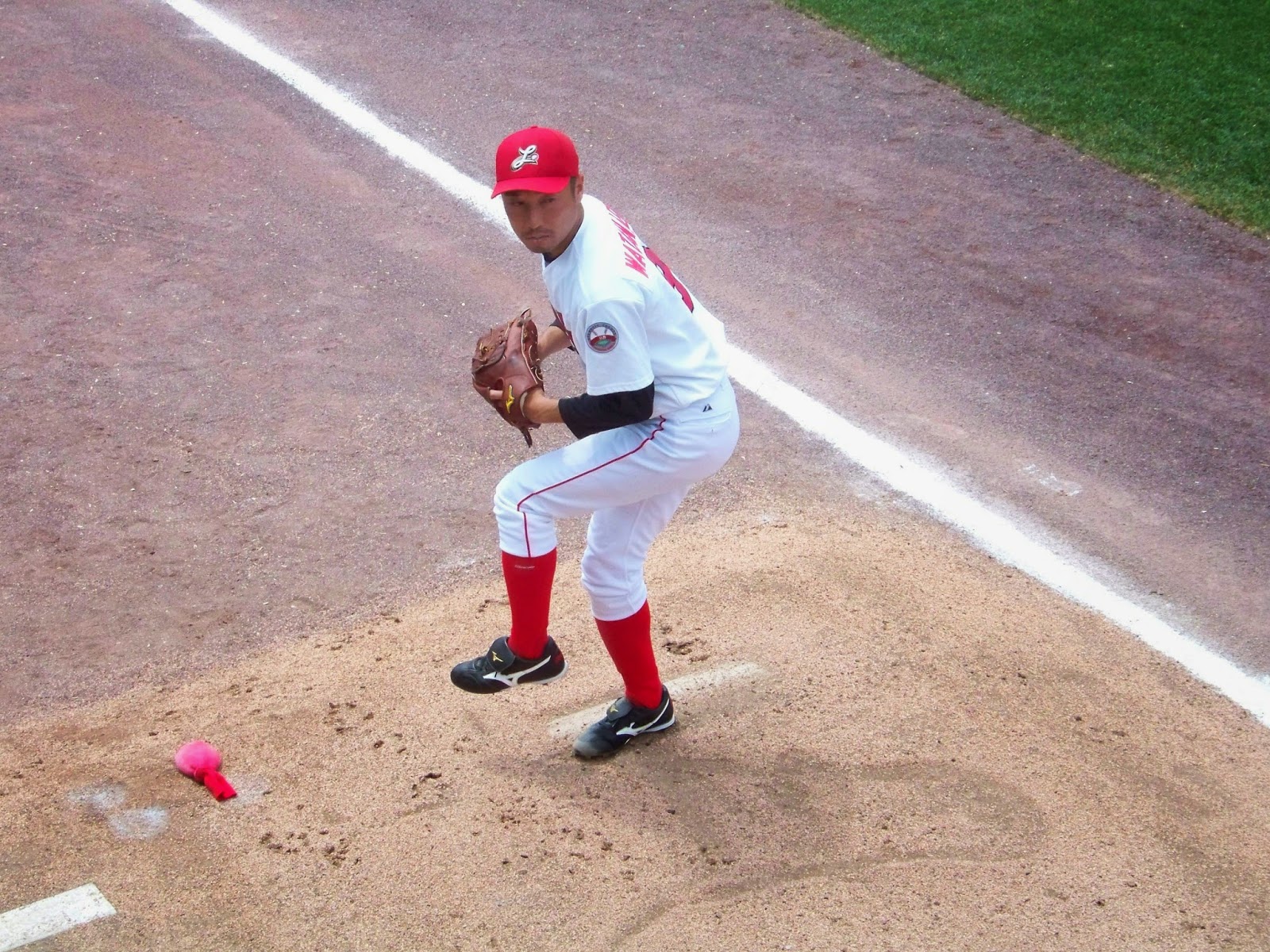 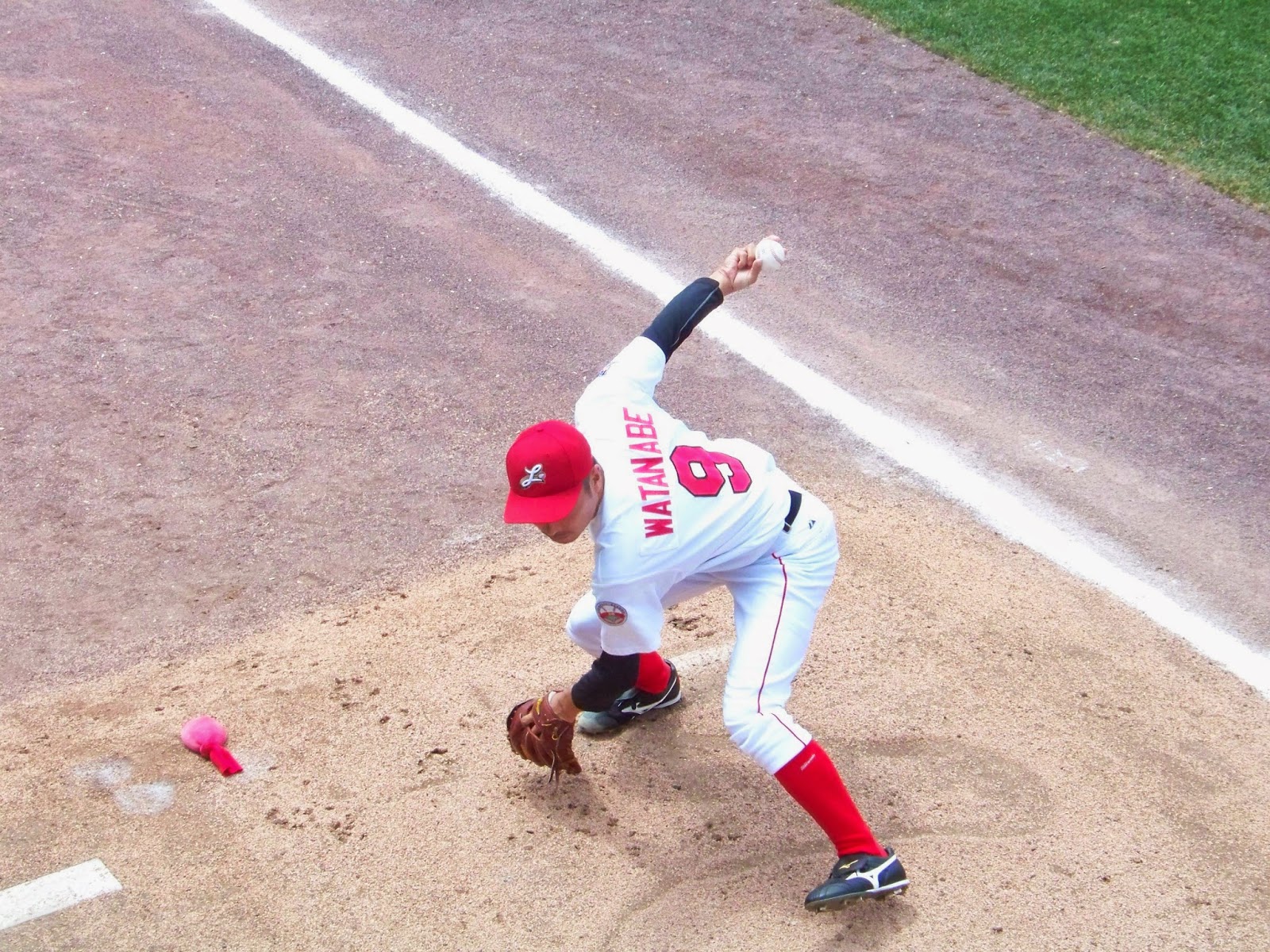 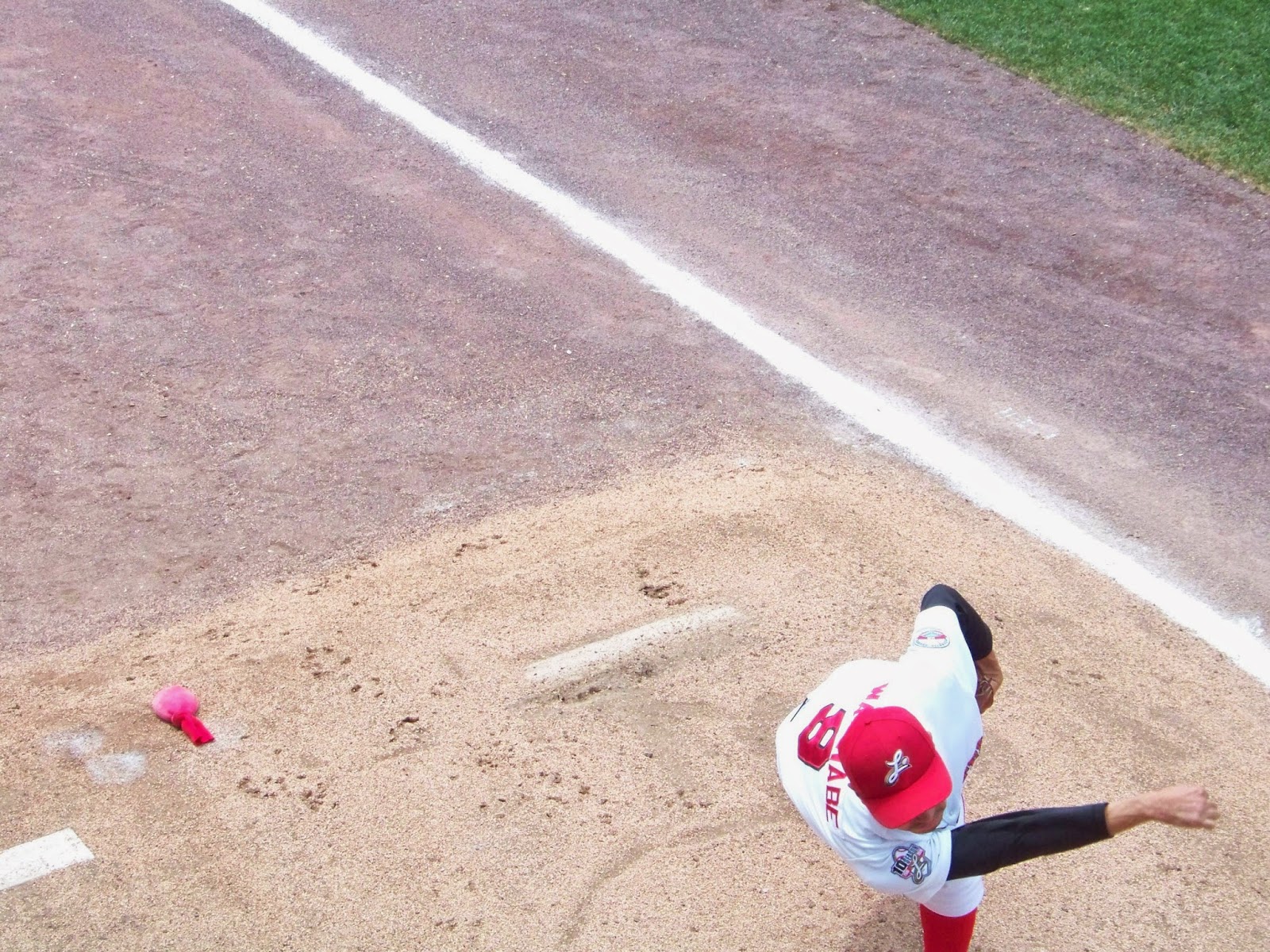 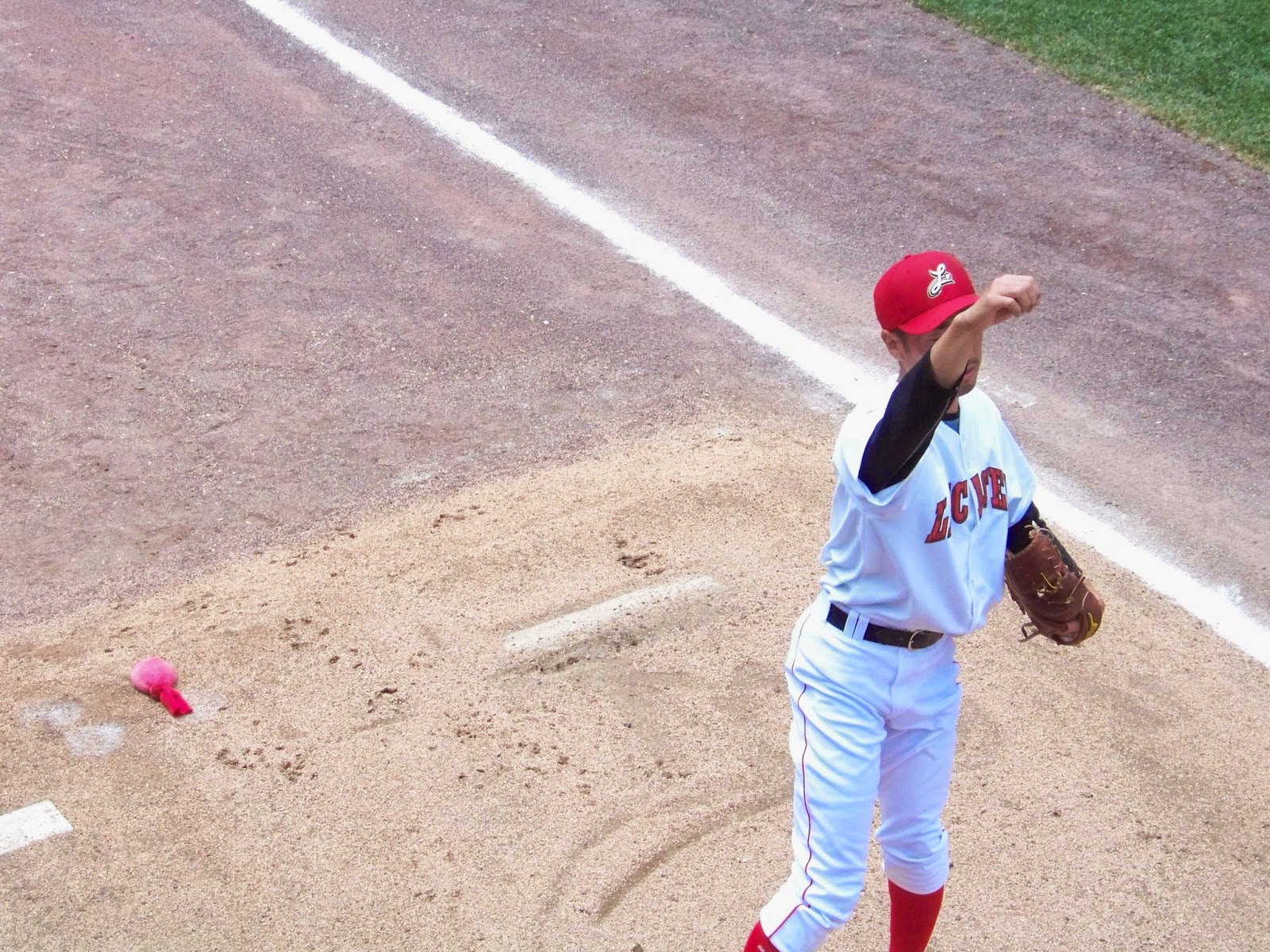 I had taken a couple baseball cards out with me to see if I could get them signed.  I didn't really expect to be able to get Watanabe's since he'd be preparing for the game and sure enough, I didn't.  I called out to him at one point when he was standing waiting for his catcher to come out but if he heard me, he ignored me.

I was able to get Yusuke Kajimoto's autograph on his 2002 BBM 1st Version card (his rookie card): 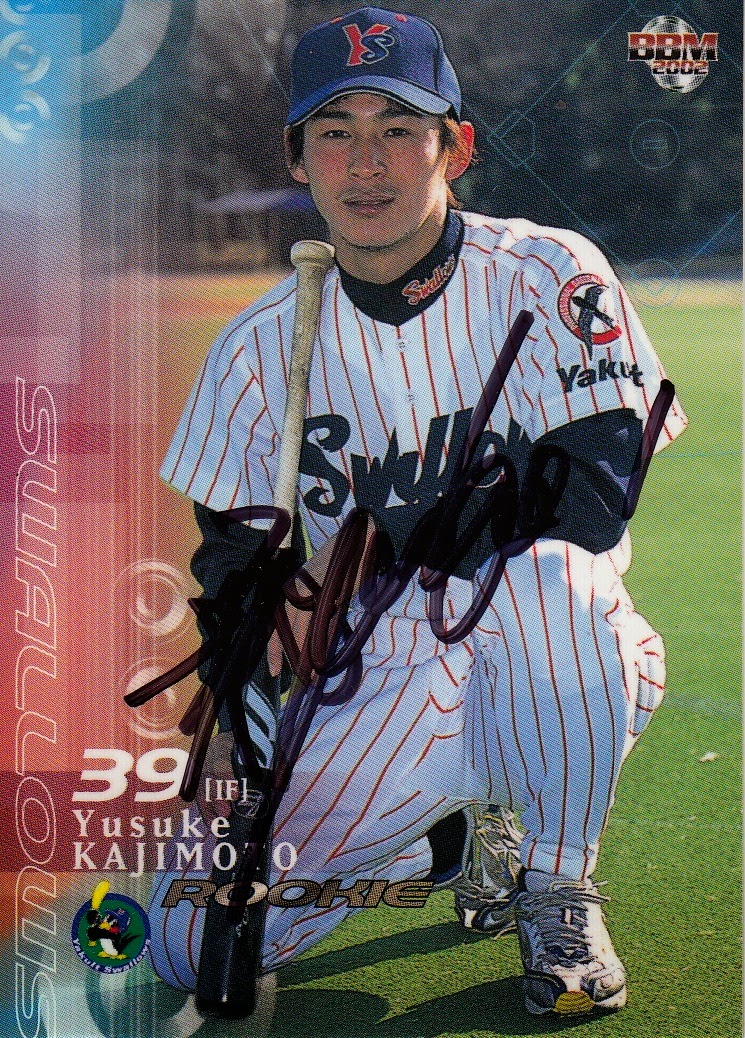 I got the autograph by using all the Japanese that I felt comfortable saying - I called out "Sumimasen Kajimoto-san" to him and held up the card.  He came over and signed it (with my Sharpie) and then I said "Arigato".  I almost called out "gambare" to Watanabe but I wasn't confident that I knew how to say it correctly.

My second surprise was when the teams lined up for the national anthem - Tomochika Tsuboi, formerly with the Tigers, Fighters and Buffaloes and San Rafael Pacifics, was on the team.  I had seen some comments on Facebook that hinted that he was somehow associated with the team but he wasn't actually activated on the roster until last week. 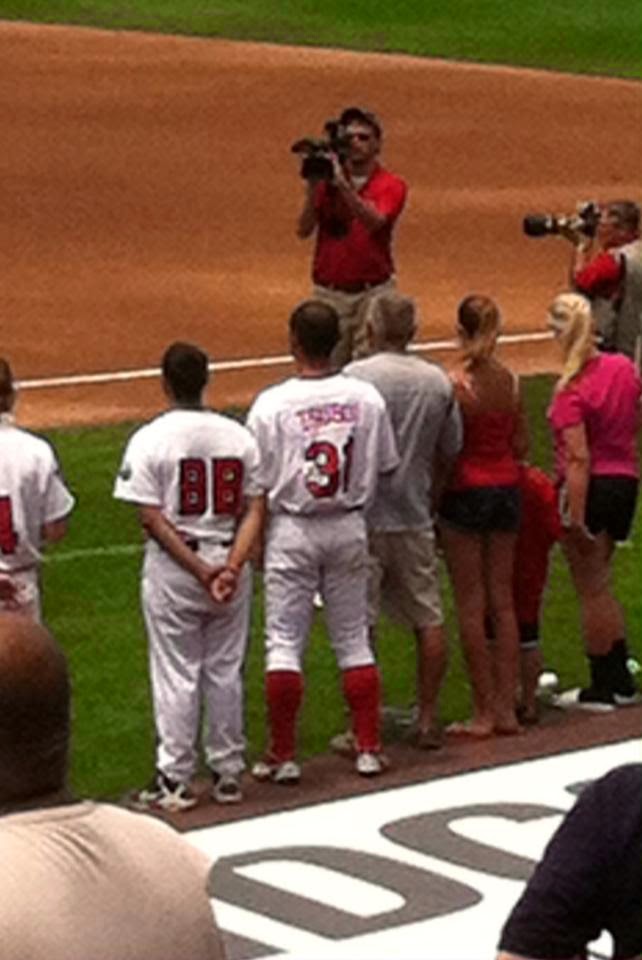 Once the game started, Watanabe was outstanding.  He went 5 1/3 innings, striking out eight and walking none.  He only gave up two hits - a triple to the second hitter of the game and a single (just beyond the glove of Kajimoto, who from the one game I saw has the range of a statue) and hit two batters.  I'm pretty sure he has a pitch limit of 80 because there really wasn't any good reason for him being lifted in the top of the sixth otherwise.  With one out, he'd hit a batter and given up the dribbler by Kajimoto.  At the time, the Barnstormers were up 2-0.  They would add an additional run in the bottom of the seventh.

Unfortunately for Watanabe, the wheels came off the Lancaster bullpen in the top of the eighth when the Southern Maryland Blue Crabs exploded for six runs.  Suddenly nobody could throw any strikes which is a common problem in indy ball - if the pitchers could throw strikes consistently, they probably wouldn't be in indy ball.  The Blue Crabs bullpen showed problems of its own in the bottom of the ninth when Cole Garner tied the game with a two out three run homer (one of the players who scored was Tsuboi who had entered the game as a pinch runner).  The Barnstormers bullpen was unable to hold the line, however, and coughed up another six runs in the top of the tenth.  The final score was 12-6 with 15 of the 18 runs in the game being scored in the final three innings.  The box score and game summary can be found here.

One final Asian player entered the game for the Barnstormers in the top of the tenth - former Detroit Tigers pitcher and member of the 2009 Chinese Taipei World Baseball Classic team Fu-Te Ni. 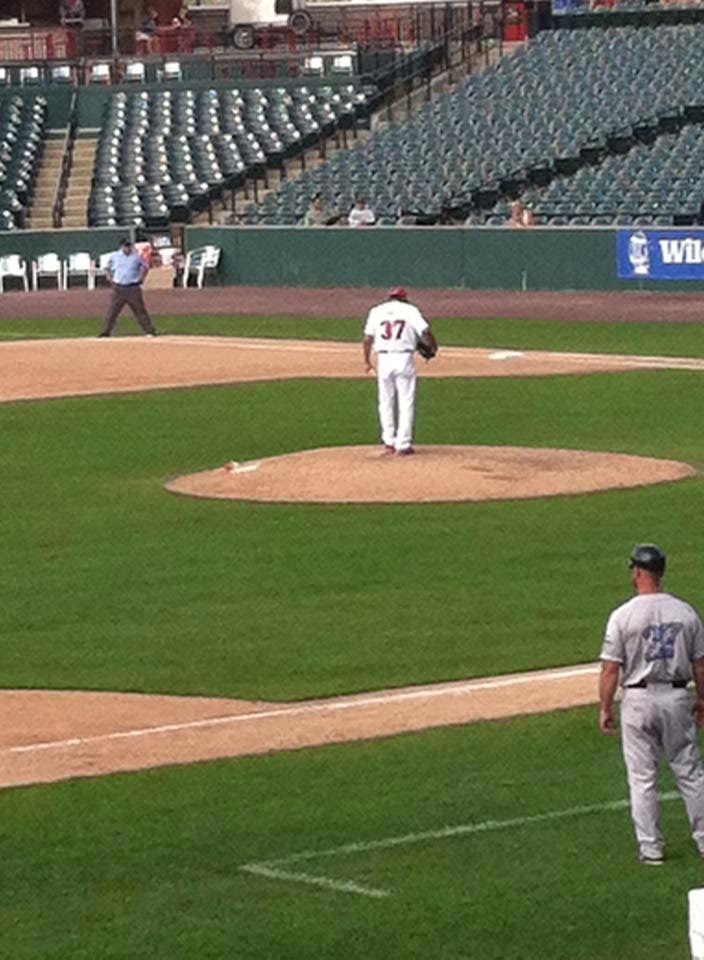 I took pictures with both my Kodak camera (an EasyShare Z712 IS) and my iPhone.  You can probably tell which pictures I took with which camera.  The battery was going in the Kodak so I couldn't take as many pictures with it as I would have liked.  Here's a couple more - one of Watanabe on the mound and one of Kajimoto batting: 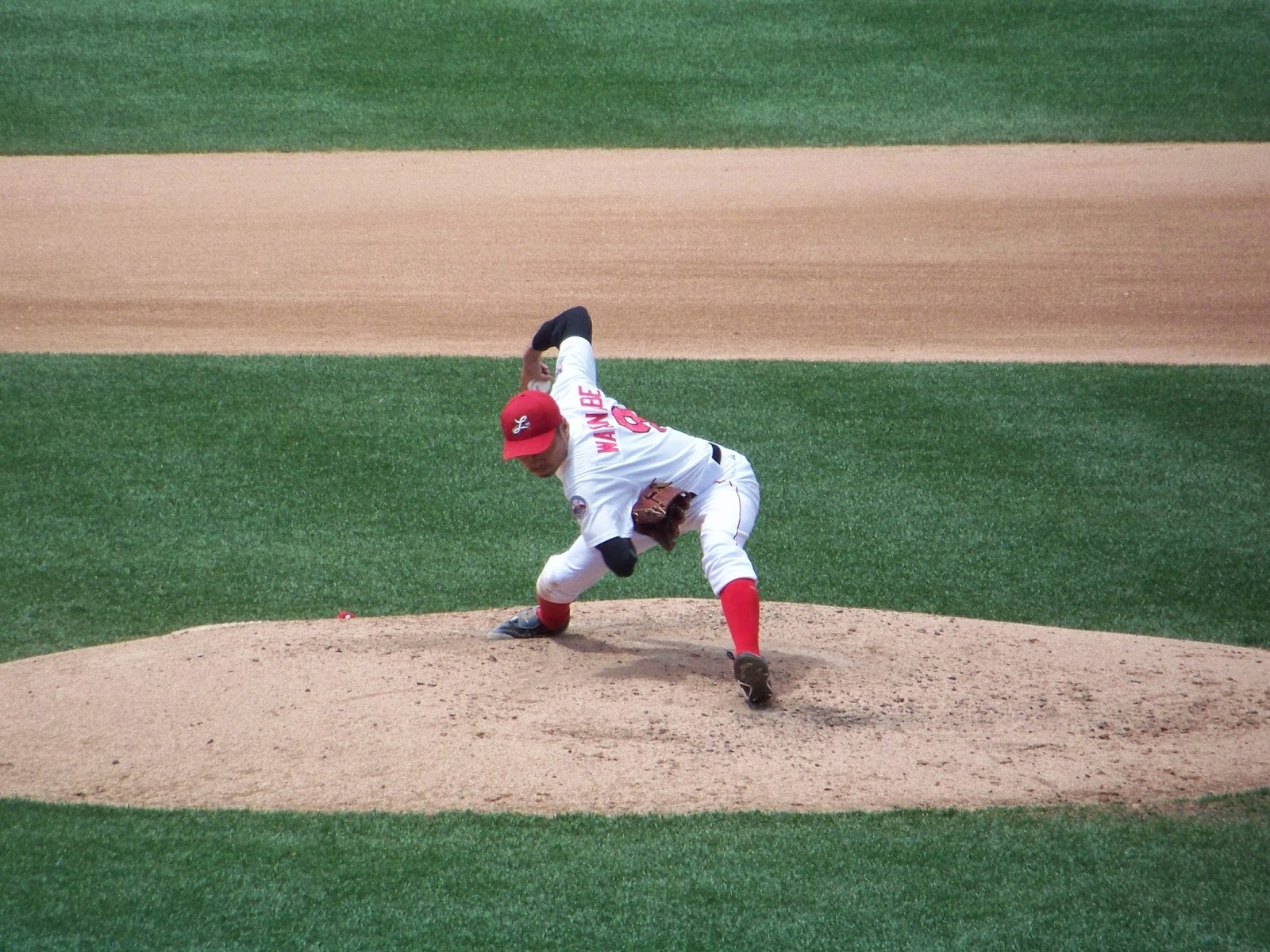 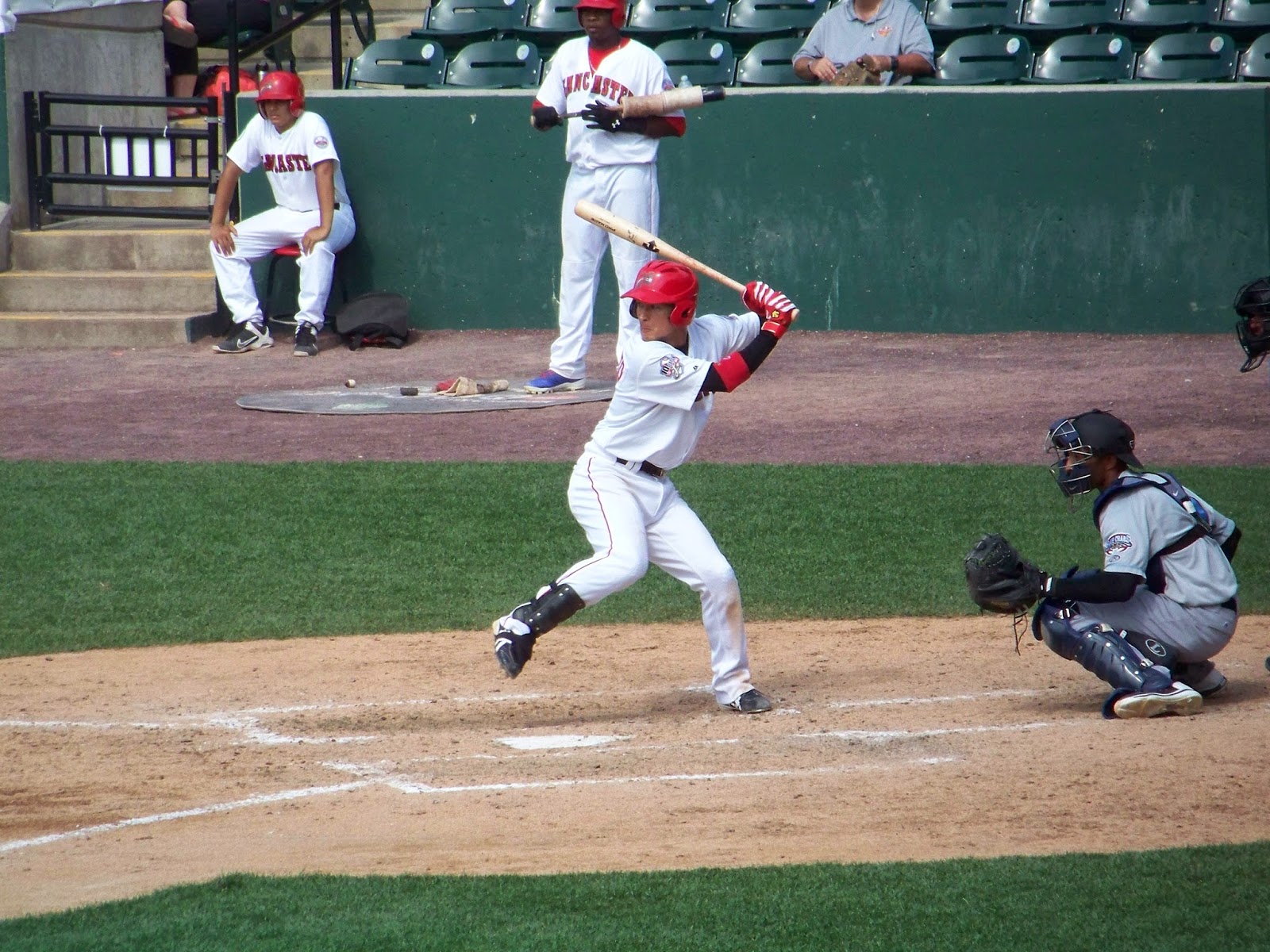 Hopefully I will get another chance to get up there this season.  I'll try to pick a game that Watanabe is not pitching so that maybe I'll be able to get an autograph.  I'll also make sure I have a Tsuboi card as well.  (I'm not a big autograph collector but if I get an opportunity, I like to take it.)
Posted by NPB Card Guy at 9:03 PM

nice game summary and good pictures. Look fwd to your next barnstormers report. I am thinking of heading out there this season.

It's cool that you're able to see all these players from Japan in the States, and hopefully get a couple autographs in the process. I wonder what the players think when they see Japanese cards in the US.

Yusuke Kajimoto stayed with us this season in Lancaster...he ended up hitting a pinch hit grand slam in the playoffs to help extend the series which the Barnstormers eventually won the championship. What a great guy..we enjoyed having him stay here.