Card Of The Week July 2

The big news this past weekend was that Shohei Ohtani made his first pitching appearance of 2017 with the Fighters' farm team on Saturday.  As I'm sure everyone already knows, Ohtani's been out with an injury for the better part of the last three months - until he made a couple pinch hitting appearances last week he hadn't been in a game since April 8th.

Ohtani started the game and struck out the first two batters (Shohei Suzuki and Nien-Ting Wu) before facing Hotaka Yamakawa:

Ohtani then walked Ryo Sakata and hit Masato Kumshiro before getting out of the inning by getting Shogo Saitoh to fly out.  He ended up only pitching the one inning, throwing 27 pitches (I think).

Instead of talking more about Ohtani with this post however I thought I'd write a little bit about Yamakawa.  Hotaka Yamakawa was the second round pick of the Lions out of Fuji University in the fall 2013 draft (one round after the Lions took Tomoya Mori).  Yamakawa spent most of his time with the Lions farm team until last season when got a chance with the ichi-gun team and took it - hitting 14 home runs in 157 plate appearances in 49 games.  Among other things this earned him an appearance in BBM's 1st Version set this year (his first appearance in one of BBM's flagship sets since his rookie year of 2014) and his first ever Calbee card.  It doesn't appear to have actually earned him a permanent spot with the top team however as he's been back with the farm team for most of this season, hitting .323 with 10 home runs (including the one off Ohtani) in 36 games. 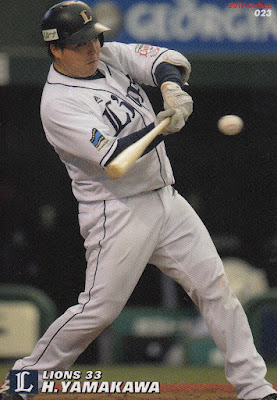