Card Of The Week July 30

This is Ohmatsu's first season with the Swallows after 12 seasons with the Marines.  Lotte let him go at the end of last season while he was recovering from a ruptured Achilles tendon suffered with the farm team in late May.  The Swallows gave him a tryout during spring camp and ended up signing him to a contract.  The only cards I know of him in a Swallows uniform are from the BBM and Epoch Swallows sets, neither of which I have yet.  I did recently pick up a Konami card of him from when he was with the Marines in a lot of assorted cards I got on Ebay.  This is a "Special" card (I don't know enough about Konami's cards to know if that's the official name of the subset or not) from the 2008 Baseball Heroes Black Edition (#B08S032): 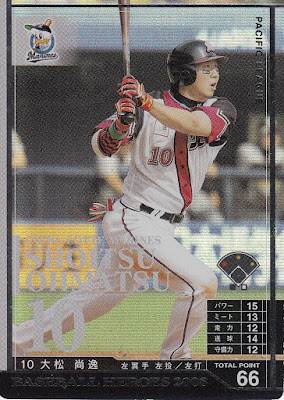 Holy cow! What a comeback!